In this article, we will examine the Identity Cache feature and the identity jump issue. Sometimes we see that identity jumps by some specific or random value in the auto-incremental columns, which is known as the identity jump issue. Usually, it occurs when the SQL Server instance is being forced to restart. This skipped gap is particularly depending on the data type of the column, and most of the time, it is possible that column type can be INT, BIGINT, or Numeric.

In the release of SQL Server 2012, Microsoft has introduced a feature of Identity Cache. The identity jump doesn’t cause any issue neither with the database nor the running tasks; however, this identity value gap is not acceptable in some of the business-oriented scenarios. This Identity counter values of the columns are stored in the system table separately, which is known as sys.identity_columns DMV. This reference object sys.identity_columns does not rely on the transaction status, and it doesn’t matter that the transaction on the user table is committed or rolled back. Now, in case this user transaction is being rolled back, we will find that the identity value has been skipped in the sys.identity_columns table. The reason being is that the value of the Identity column value does not get rolled back. Apart from the above scenario, there could be various reasons or situations where these issues of the skip of the Identity value will be seen, which will be small in number and random. However, when there is an issue of Identity value jump, the amount of the skip value will be prominent and precise in number, depending upon the column data type, which is easy to identify.

Verify the current identity value with the help of DMV (sys.identity_columns)

Below T-SQL statement returns the scope_identity for the table. 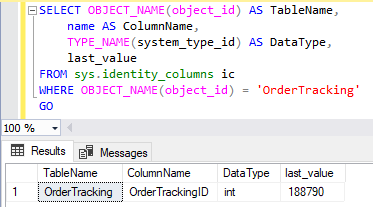 Inserting a new row in the table before force restart

With the insertion of one new row, the value of the identity will become 188791, and the next identity value should be 188792. Now, in case of a forceful reboot of the SQL Server Service with the help of Task Manager, the value of identity has jumped to a new value of 189790 for the column OrderTracking. 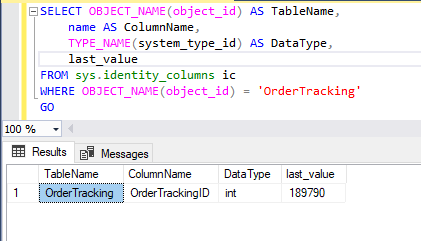 We can see here that the Identity counter has jumped by 999 for a current stat and with 1000 over the last transaction on the table. The identity jump value depends on the last insert operation over the table. For example, we have inserted ten rows in the last process then the identity jump will be 990 after the force restart of SQL Server.

Now, let us insert 1 row again in the same table and verify the newly added row in the table.

In here, we can see that the new row inserted has got the identity value as 189791.

Before restarting the SQL Server instance, consecutive values of identity was being generated without any significant interruption. However, after the SQL Server service was restarted, we can see a gap in the incrementing Identity value, which indicates SQL Server is caching the value of identity columns and reseeding the column after the process of force restart takes place. To avoid this circumstance, we can choose any one of below three choices:

Disable the IDENTITY CACHE option at the database level

The default configuration value of IDENTITY CACHE will be set as ‘ON’ for each user database level in SQL Server. Fundamentally IDENTITY CACHE is a feature to boost the performance of the insert operation. However, it could be disabled at the database level to avoid the identity gap in the column of the tables. 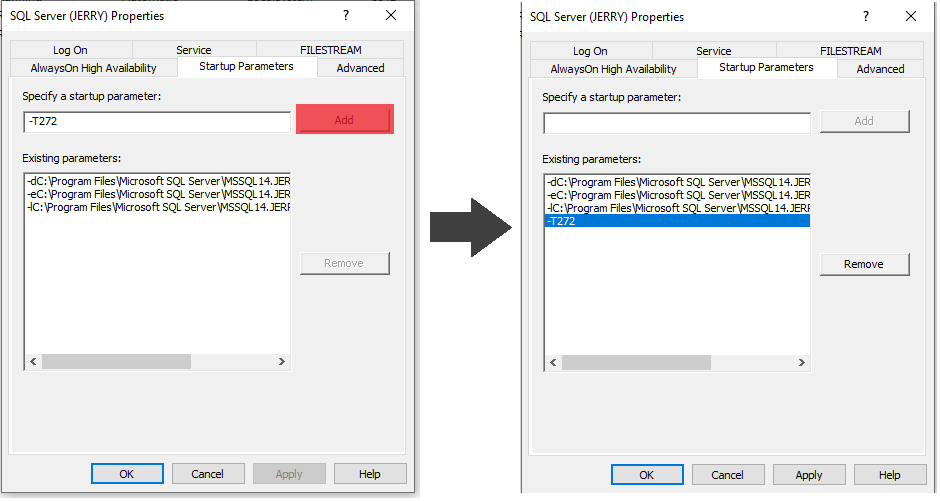 The steps mentioned above will disable the IDENTITY CACHE at the server level for each existing database as well as the database being created. After applying the changes in the start-up parameter, users will be asked with the below prompt to restart the SQL Server instance.

SEQUENCE is a user-defined incrementing object in the SQL Server database, which produces an integer incremental identity or sequence, according to the schema definition and specification. A SEQUENCE can be used as an artificially incremented Identity property for a column of the table. It works as a sequence generator, which was introduced in SQL Server 2012. We can use a sequence with the NOCACHE option with the primary key as a substitution of IDENTITY() to avoid the identity jump issue with the primary key.

Creating a SEQUENCE with NOCACHE

Here, we have a sequence to generate a unique and incremental value generation option that starts from 1 and undefined maximum value. If users want to use a sequence with the table, then the table should be specified without the IDENTITY() parameter on the column, and the sequence object will be used in the INSERT statement when inserting a new row into the table.

This SEQUENCE solution resolves your identity jump issue with the identity columns in the SQL Server. However, you can approach this when the user is designing the database for the new product. For the existing system, this approach is not recommended because of many dependent object changes required to be done.

To resolve this issue for future databases, disabling the IDENTITY CACHE at the server level is recommended by adding the ‘Trace flag’ in the start-up parameter of the SQL Server Service. Ideally, the database administrator will have the number of Pre and Post activity list to perform on the new SQL Server setup. Fundamentally this ‘Trace flag’ should be included in the database administrators checklist for the Server Migration or Tech-Refresh kind of activities when the users won’t IDENTITY CACHE feature.