In the world of information, auditing serves an important purpose. It helps to provide an assurance that the data involved is accurate and safe. The level of assurance of course depends on any number of factors including the level of trust in those performing an audit (or collecting the data for the audit), the frequency the data is collected, and the types of data collected.

Any time the collection of data is this important to a process you can bet that a DBA is going to be involved. We get asked to create and run queries to pull data (frequently ridiculously complex queries, and rarely some simple ones). You could almost make it into a joke.

An auditor walked into the office one day, dropped an inch thick set of requirements down on the counter and said, “I need these by tomorrow.”

I realize it’s not terribly funny but then I’ve been through a few of them where it was either laugh or cry and I’m the laughing type.

Joke or not Auditors want a lot of data. Some of that data can be found in the existing application data or database metadata:

Frequently however they want information that is not part of the “regular” data:

And sometimes they don’t want data, they want proof that you know when certain events have happened and report on them regularly:

You can easily see that a lot of this information isn’t directly available. There are however a number of techniques and tools that can be used to collect it.

This simple option is part of the Server Properties. You have the option of logging failed logins, successful logins, neither, or both. Any changes to this property require an instance restart before they take effect.

The information logged is written to the error log for the instance. Generally I would recommend logging at least failed logins if not both failed and successful. This particular form of auditing is fairly light weight and has very important information even if it is not needed for an audit.

If you need one of these options you will know it. If you don’t then you shouldn’t use them. They are extremely intensive and can take up huge amounts of disk space very quickly. On top of that they are configured to bring down the instance if they run out of space and cannot write the audit information.

These options are intended for specific compliance requirements and are not generally used otherwise. If you do need them you should use Common Criteria Compliance instead of C2 Auditing. C2 Auditing has been depreciated and will be removed in a future build of SQL Server.

When turning on Common Criteria Compliance it is important to remember that there is more to it than just checking the option on the permissions security tab. The full instructions can be found in the link above.

Adding audit columns to tables is a common method of collecting audit information. These are typically who did it and when type columns for both row creation and last updated time. The easiest way to handle this is to use a combination of defaults and a simple trigger.

For example: A few quick points:

Triggers are a very powerful and versatile method of collecting audit information but they also have some serious limitations. There are three categories of triggers available.

Every now and again an auditor will have a requirement that you prove that certain changes cannot be made. For example no one can delete from or alter the log tables. For this type of work triggers are going to be one of your go-to tools.

Historically this has been the most common method of collecting audit information. It should be noted that traces have been official depreciated and will be removed in a future version of SQL Server. Of course it should also be noted that Microsoft recently added a new feature (Distributed Replay) that requires trace files.

Traces can be created to capture large amounts of information on events that occur on the instance. While it is possible to run traces using SQL Server Profiler, for the purposes of auditing it is best to generate T-SQL scripts. However because these scripts can be quite complex it is often easiest to use Profiler to generate the script.

First use Profiler to generate your trace then select the File->Export option: 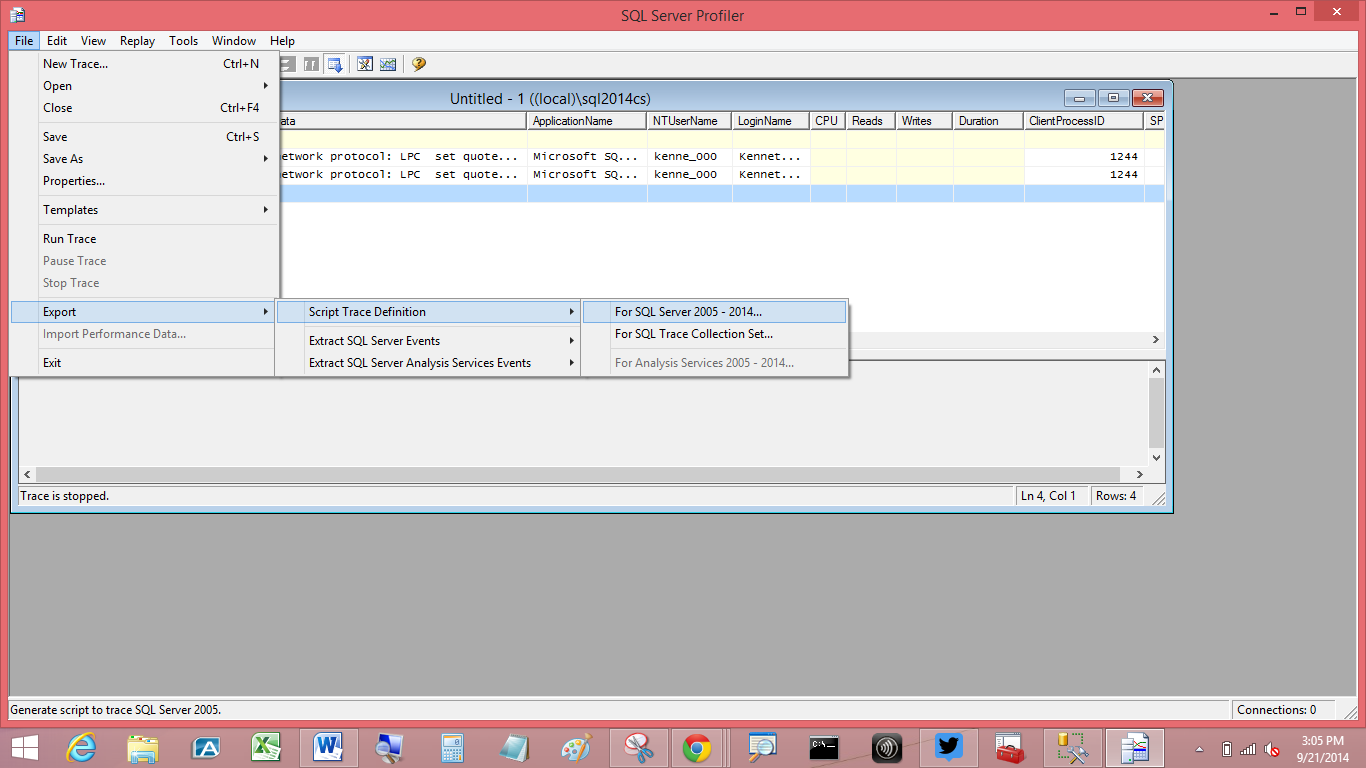 There are several important factors to take into account when using traces to collect audit data.

Introduced in SQL 2008, Extended Events is a replacement for SQL Tracing. There are a few important differences. Including but not limited to:

Even with all of the differences most of the same best practices still apply.

So far most of the options have been tools that can be used for auditing, not specifically auditing tools. SQL Server Audit is Microsoft’s offering in this arena. While based on Extended Events this tool includes a number of important auditing features. The audit events that are excluded from Extended Events are available in Audit. As are the ability to shut down the instance if the event cannot be written and the ability to write to the Windows Security event log, Windows Application event log or a file.

Once you are used to them both the GUI interface and the T-SQL commands are fairly simple and intuitive. Add all of this together and Audits are the go-to tool for dealing with; well; audits. The best practices for Extended Events still apply with one final warning. Server level audits are available in any edition while Database audits are only available in the Enterprise, Developer and Evaluation versions.

Audit information is not just for auditing

Having collected all of this audit information, use it. Generate automated reports to let you know what’s going on. The following are just a few examples of the types of reports that can be generated using audit data.

Kenneth Fisher
Kenneth works as a SQL Server Administrator near Dallas Texas. He started working with databases over 20 years ago and he’s been working in SQL Server for over 15 years now with a fairly even split between administration and development.

View all posts by Kenneth Fisher