With the advent of the Information Era, data is being collected on a massive scale. Information Technology systems have made access to this data faster and easier. It has also made it easier for data to be misused.

We have all heard of instances where hospital employees have taken a sneak peak at a celebrity’s medical record. In many cases these hospital employees have legitimate reasons to access patient information, which means their access cannot be revoked or in some cases, even restricted, without hindering their ability to perform their duties efficiently.

This is just one of a plethora reasons why governments are implementing standardized auditing requirements such as HIPAA, SOX, PCI, GLBA, FERPA and Basel.

If we cannot prevent people from accessing data, we need to keep track of how it is being used. This will then enable us to investigate any suspicious activities to determine if a breach has occurred and the nature of the breach, which will allow us to take appropriate action.

To this end, Microsoft have added the Auditing feature to SQL Server 2008 onwards.

Auditing in SQL Server prior to 2008

Before SQL Server 2008, auditing had to be done by using a combination of features such as:

Utilizing the above mentioned features for auditing purposes can be quite cumbersome as it involves a significant amount of setup. The data accumulated by these methods are logged in different ways to a variety of locations which made it hard to assimilate. Potential performance impact can also be associated with some of these actions which makes it less than desirable.

SQL Server auditing is a new feature which makes use of extended events to allow you to audit everything that happens in your server, from server setting changes all the way down to who modified a value in a specific table in the database. This information is then written the Windows security log, the Windows application log or to a flat file.

In SQL Server 2008, Auditing was an enterprise only feature. In SQL server 2012, server auditing has now been made available to all editions, however database auditing remains for use by enterprise customers only.

Extended events makes use of packages to group objects together. One of these packages is the SecAudit package which is used by SQL Audit. The events in this package are private and used internally by the SQL Audit feature. This package is unfortunately not accessible so none of its objects are available externally.

The Server Audit resides in the master database, and is used to define where the audit information will be stored, file roll over policy, the queue delay and how SQL Server should react in case auditing is not possible.

In the audit configuration the following is configured:

A Server Audit is automatically assigned a uniquely identifying GUID. This GUID can be explicitly assigned. This GUID is static and cannot be changed after the audit has been created.

In SQL Server 2012, the audit now also allows for a filter to be specified. This is basically a WHERE clause for the audit which is evaluated before an audit event is written to the target audit destination. This is applied to all audit specifications linked to an audit. Any of the fields returned by the sys.fn_get_audit_file function except for file_name and audit_file_offset may be used as a filter expression.

In SQL Server Management Studio an audit can be created under Audit node which resides under the Security node in the Object Explorer. 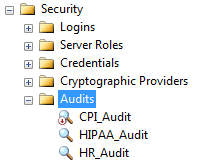 An Audit can also be created by using the CREATE SERVER AUDIT Transact SQL command.

Both the audit and the audit specification need to be enabled for an event to be logged.

Permissions required:
To CREATE, ALTER or DROP an audit a user requires the ALTER ANY SERVER AUDIT permission. This is also included in the CONTROL SERVER permission.

In order to write to a file location the SQL Server service account will need to have write permissions on the network share. In order to read the file all users which belong to the Audit Reader role and Audit Administrators role need to have read permissions to that share as well.

Additional security is required when writing to the Windows Security Log, this is addressed later in this article.

Audit specifications can have 3 categories of actions:

Some actions can be audited individually, such as auditing a select event on a table. This is referred to as an Audit Actions.

In most cases audit actions are grouped together resulting in Audit Action Groups. This facilitates audit specification configuration since actions which form a logical unit are included in a single group saving you from having to specify each one individually.

The Server Audit Specification which is available in all editions of SQL Server, is used to define what needs to be audited at a server level. 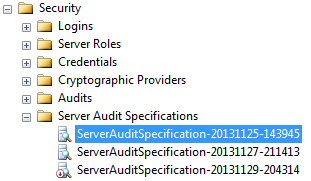 To create a Server Audit Specification, three things need to be specified:

Permissions required:
In order to create a Server Audit Specification a user needs to have permission to connect to the database and have ALTER ANY SERVER AUDIT, the CONTROL SERVER permission allows the audit to be viewed by the user.

Unfortunately it cannot be done at column level as of yet.

The Database Audit Speciation is created under the Security node of the relevant database. 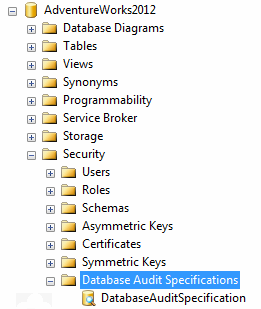 It can also be created with Transact SQL and SMO

The following needs to be configured to create a Database Audit Specification:

Even though SQL Server will allow you to specify an audit action on server scope objects , such as system views, the objects will not be audited but no error will be raised either.

If you want to audit server scope objects, you need to create a database audit specification in the master database.

Permissions required:
In order to create a database audit specification a user needs to have permission to connect to the database and have ALTER ANY DATABASE AUDIT SPECIFICATION or the ALTER or CONTROL permission for the database to which they would like to add the audit.

One of the new 2012 features is the ability to create User Defined Audit Events. User defined audit events can be used to integrate third party applications to SQL Server Audit.

A user defined audit event is created by using the sp_audit_write procedure. This procedure accepts 3 parameters:

In order for a user defined event to be audited, the USER_DEFINED_AUDIT_GROUP needs to be selected for audit in either the database or server audit specification.

If this has not been selected as an audit event, all events generated by the sp_audit_write procedure will be ignored.

When auditing information is written to a file target it is done in binary. The table-valued function fn_get_audit_file() need to be used to read it.

Audit information written to the Windows Security Log or the Application Log can we read using event viewer. This information can also be read through the SQL Server Management studio by expanding the security node, then expanding the Audit node, right click on an Audit and select the option View Audit Logs

The audit logs themselves need to be protected from unauthorized access and modification.

There are two ways to increase the security of the audit logs:

Restarting a SQL Server after a forced shutdown

If SQL Server was shut down by SQL audit, it will not start up normally. It needs to be restarted in single user mode using the –m trace flag. Alternatively, it can also be started in minimal configuration mode using the –f flag.

This will then allow the DBA to make modifications to the audit if it is required.

SQL Server will write the MSG_AUDIT_SHUTDOWN_BYPASSED message to the error log if auditing was bypassed in this way.

SQL Server Auditing is a powerful feature, but should not be used without careful planning and consideration. In order to use Auditing successfully, you need to have a very clear idea of what you hope to achieve. Which actions need to be audited? Who needs access to this information? How will it be accessed? A large part of successful auditing depends on how the audit data is stored, processed and monitored.

In addition to planning, more work may be required to create reports which can be used for auditors to make sense of this information.