SQL Server temp tables are a special type of tables that are written to the TempDB database and act like regular tables, providing a suitable workplace for intermediate data processing before saving the result to a regular table, as it can live only for the age of the database connection.

SQL temp tables can be used to enhance stored procedures performance by shortening the transaction time, allowing you to prepare records that you will modify in the SQL Server temp table, then open a transaction and perform the changes.

There are four main types for the SQL temp tables:

The SQL Server Database Engine can distinguish between the same SQL temporary tables created while executing the same stored procedure many times simultaneously by appending a system-generated numeric suffix to the SQL Server temp table name. This is why the local SQL temp table name can’t exceed 116 characters.

Although both SQL Server temp tables and table variables are stored in the TempDB database, there are many differences between them such as:

In addition to that, SQL Server column level statistics are generated automatically against SQL temp tables, helping the SQL Server Query Optimizer to generate the best execution plan, gaining the best performance when querying that SQL Server temp table. But you should take into consideration that modifying SQL temp tables many times in your code may lead to statistics getting out of date. This would require manually updating for these statistics, or enabling Trace Flag 2371. In this article, we will see how we can benefit from the ability to add clustered and non-clustered indexes in the SQL Server temp tables.

Defining PRIMARY KEY and UNIQUE KEY constraints during SQL temp table creation will enable SQL Server Query Optimizer to always be able to use these indexes. Even so, these indexes prevent inserting non-unique values to these columns, which is not the best case in all scenarios, that may require non-unique values. In this case, it is better to explicitly define a clustered or non-clustered index that could be configured as a non-unique index. Adding indexes to the SQL temp tables will enhance its performance if the index is chosen correctly, otherwise, it can cause performance degradation. Also, not every SQL Server temp table needs adding indexes, as it depends on many things such as the way that this SQL temp table will be called, joined with other huge tables or if it will be part of a complex stored procedure.

Let’s start our demo, in which we will test the performance of filling and retrieving data from SQL Server temp tables that contain 100k records, without any index, with a non-clustered index, and with a clustered index. We will concentrate in checking the time consumed by each case and the generated execution plan. To evaluate the consumed time, we will declare @StartTime variable before each execution, set its value to GETDATE () and at the end of each execution, we will print the date difference (in ms) between the current time and the start time.

Executing the previous script, the result will show us that in our case, adding a non-clustered index is worse than having the table without index by 1.2 times in our case, but adding a clustered index will enhance the overall performance by one time in our case as in the below timing comparison in ms: 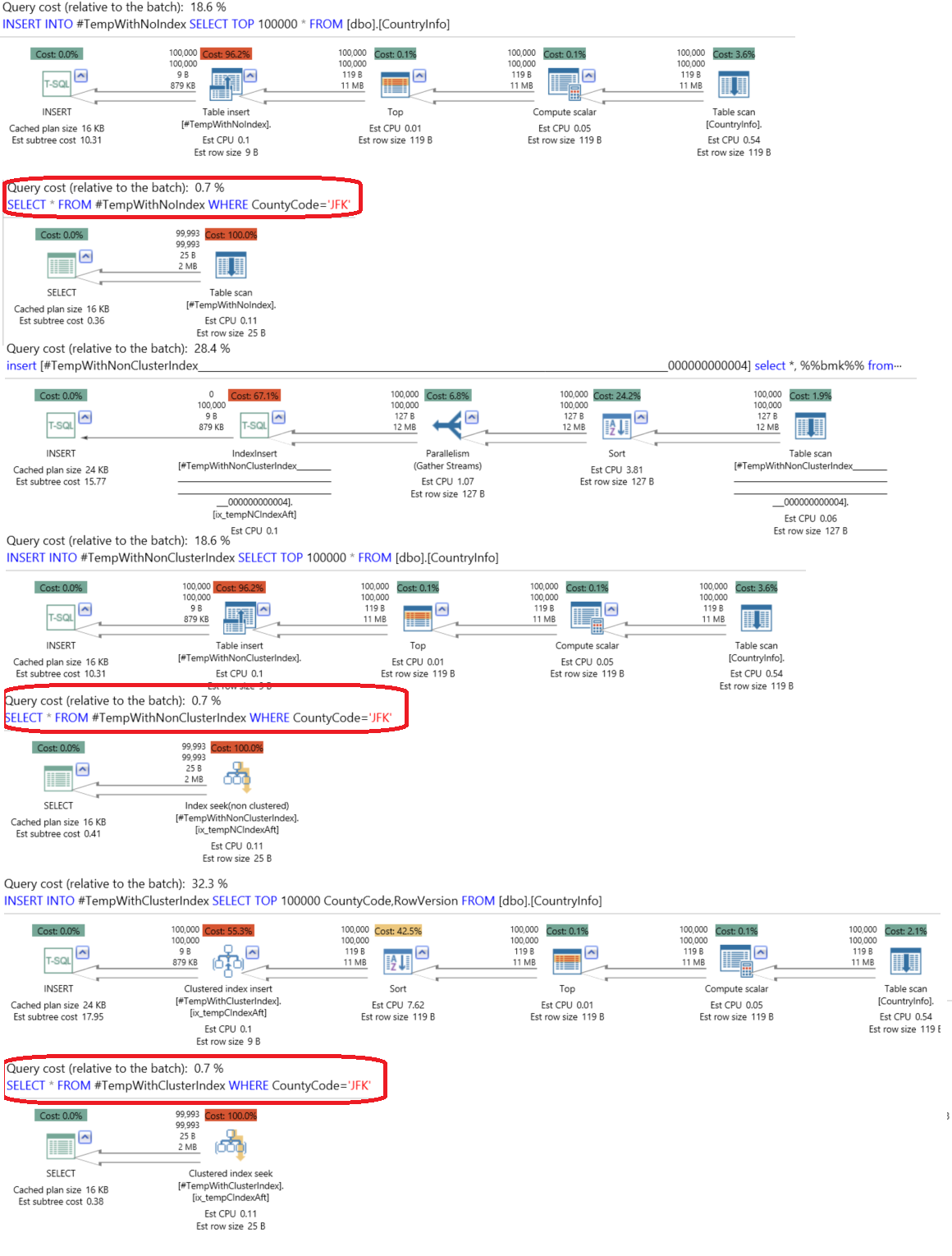 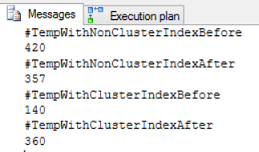 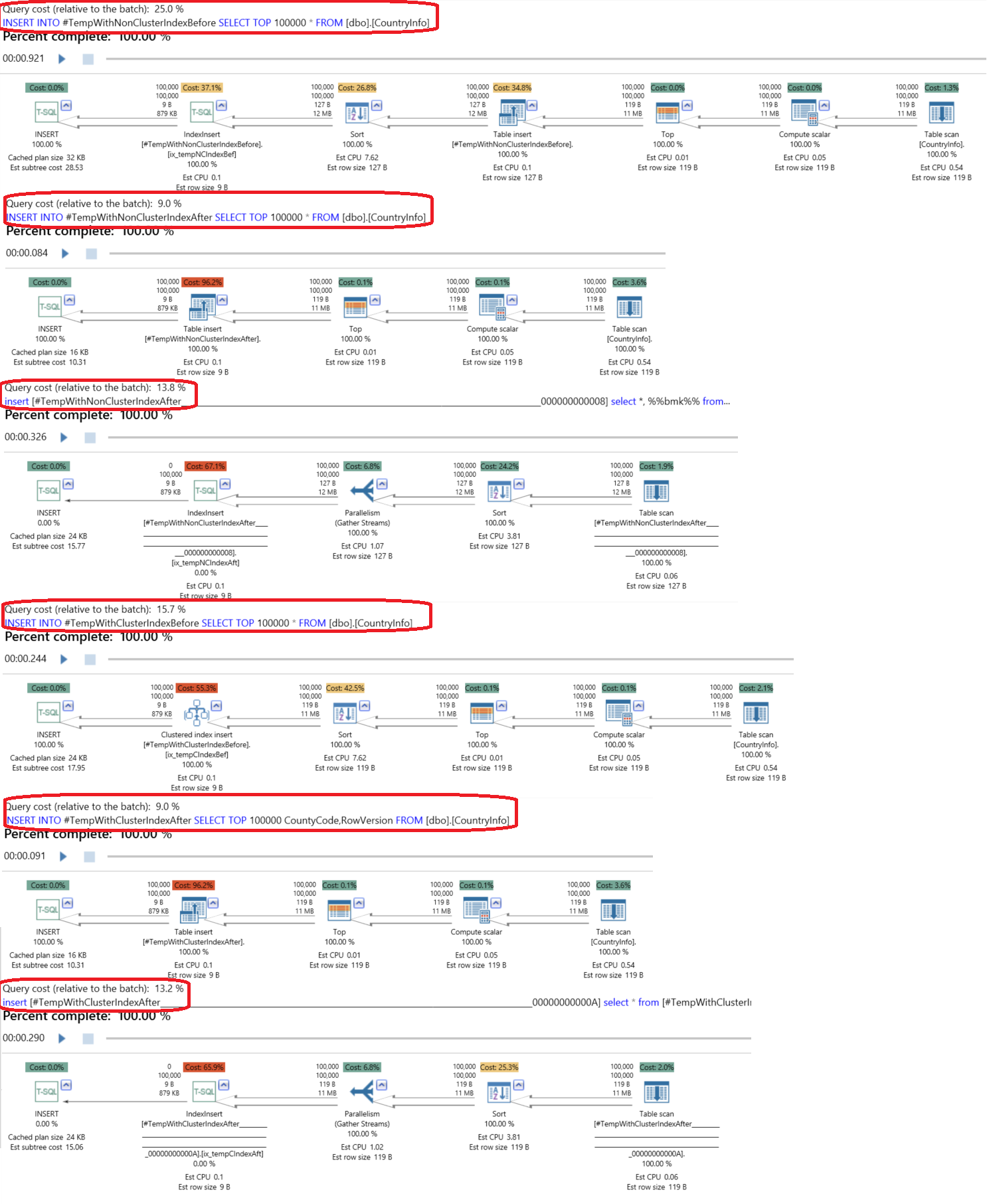 In SQL Server, SQL temp tables, that are stored in the TempDB database, are widely used to provide a suitable place for the intermediate data processing before saving the result to a base table. It also used to shorten the duration of long running transactions with minimum base table locking by taking the data, processing it and finally opening a transaction to perform the change on the base table. This approach is applicable to add non-clustered and clustered indexes to the SQL Server temp tables, which both can enhance the performance of retrieving data from these tables if the indexes are chosen correctly.