This article is about many different SQL data types that we use when working with SQL Server. We will start with a quick overview and go through some stuff like categories of data types, what objects we can work with, and how to create our own custom data types.

To kick things off, let’s talk about what is a data type. If I had to define it, I’d say that data type determines the kind, size, and range of data that can be stored in an object. So, this brings us to a question of objects that have data types:

These four SQL data types of objects are of the highest importance. Columns are obviously for tables. Every time we create a variable, we also need to assign a data type to it. In addition to those, we have expressions and parameters to conclude the list of objects that are going to hold data and therefore we need to specify what kind of data they will contain.

Moving on, let’s see the three categories of data types:

There is not much to say about the first category. These are data types that we’re all used to. Below is a chart that lists well known built-in data types and their ranges:

Next, we have what we mentioned at the beginning, and those are user-defined alias data types that allow us to create our own data types based on the built-in list above.

The last category is user-defined common language runtime (CLR) data types that allow us to create our own data types using the .NET Framework. This is a bit more complicated than the above and requires programming skills to build an assembly, register that assembly inside the SQL Server, create a new SQL data type based on that assembly and then we can start using the newly created data type in SQL Server.

Let’s move on to the next section which is basically just theory, but definitely something that you should think about when storing data either permanently or temporarily.

GUID is an acronym for Globally Unique Identifier. It is a way to guarantee uniqueness and it’s one of the biggest SQL data types. The only downside of GUID is the 16 bytes in size. Therefore, avoid indexes on GUIDs as much as possible.

NULL vs. NOT NULL

If you stick with SQL Server defaults, that could lead to some data integrity issues. You should always try to specify the nullability property whenever you’re defining columns in tables. Back to the basics, null means unknown or missing which basically means it’s not 0 or an empty string, and we cannot do the null comparison. We cannot say null = null. This is a no can do. There’s a property called ANSI_NULLS that we can set and control this comparison with null values.

This type of column is just a regular column in SQL Server except for a property that is set to on and it tells SQL Server to optimize that column for null storage.

First of all, always use the right data type for the job. This is a lot bigger than most people think. It can have a significant impact on efficiency, performance, storage and further database development.

If we take the first two, the query optimizer is going to generate an execution plan depending on what data types are used. A very simple example could be if we’re using the bigint data type where we could be using the smallint – well then, we are most likely just slowing down the query. Choosing the right SQL data type will ultimately result in query optimizer working more efficiently.

It a good idea to provide documentation for yourself and others using the database on data types going into the objects. It goes without saying, but avoid deprecated data types, always check Microsoft’s latest documentation for the news and updates. If there’s a slight chance that you’re going to work with non-English data, always use Unicode data types. Furthermore, use the sysname data types for the administrative scripts over the nvarchar.

Let’s jump over to SSMS and see how we can work with some of the data types mentioned in the previous sections. We’ll go through conversions, sparse columns, and alias data types.

Cast, Convert and Parse functions convert an expression of one SQL data type to another. Below is an example query that can be used on a sample “AdventureWorks” database against the “TransactionHistory” table. It’s grabbing “ProductID” and “TransactionDate” from which we can use that date of the transaction to see how conversion works:

Here is the result set of various SQL data types:

We used the Cast function against TransactionDate to convert values to a nvarchar to a length of 30. Next, we used Convert to do the same thing but then we also specified the format 110 which gives us a specific date style. Last, we used Parse which essentially works the same, but we can apply culture to it.

Let’s take a closer look at the result set and see what we got:

Next, let’s see some extra stuff that we can do with the Parse function. Parse is great with converting strings to dates and integers. For example, if we execute the Select statement below, it will grab the string 100.000 and turn it into an integer:

Here is the result set:

Now, let’s say that we want to do the same thing again but for some reason, the integer has a character in it that SQL Server cannot convert to an integer:

Here is the error message that it throws:

So, what we can do in this case is to use Try_Parse instead of regular Parse because if we try the same thing from above, it will return a null value rather than the error:

This method can be used as an identifier if something would error out ahead of time AKA defensive coding. Tries can be applied for the other two SQL data types as well.

As I mentioned at the beginning, sparse columns reduce null space requirements. So, let’s jump to Object Explorer in our sample database, locate and query BillOfMaterials table to see how this works:

Notice that there are a lot of null values within the ProductAssemblyID and EndDate columns: 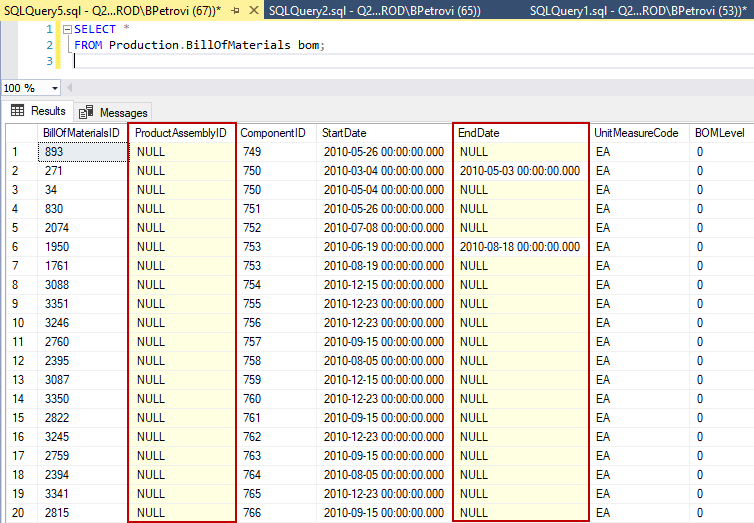 Therefore, we can say that these two are good candidates for sparse columns. So, one way to change this is to simply change the property in the designer or we can do it using the T-SQL code from below:

Commands did not complete successfully the first time, so I had to lose the clustered index (line 7) and then everything went smooth:

If we go back to Object Explorer, refresh the BillOfMaterials table, we can see that those two are now marked as sparse columns: 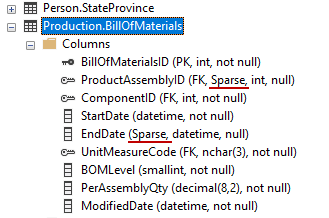 Nice, right. One more neat thing about sparse columns is called column sets. This is useful in a situation when we have a table that contains a bunch of special-purpose columns that are rarely used like in our example ProductAssemblyID and EndDate columns or AddressLine2, MiddleName, etc. So, the idea with the column set is that SQL Server will take all those columns and give us a generated XML column that is updateable. This can lead to a performance boost of the application because SQL Server can work with the column set rather than with each sparse column individually.

So, let’s add a column set using those two examples from above using the following command:

So, if we try to add a column set but our table already has sparse columns, it will error out:

If you ever come across this, the easiest workaround is to undo sparse columns. This can be easily done in the designer. Just open it up from Object Explorer, select the column that you need, and within the column properties change the Is Parse property to No as shown below: 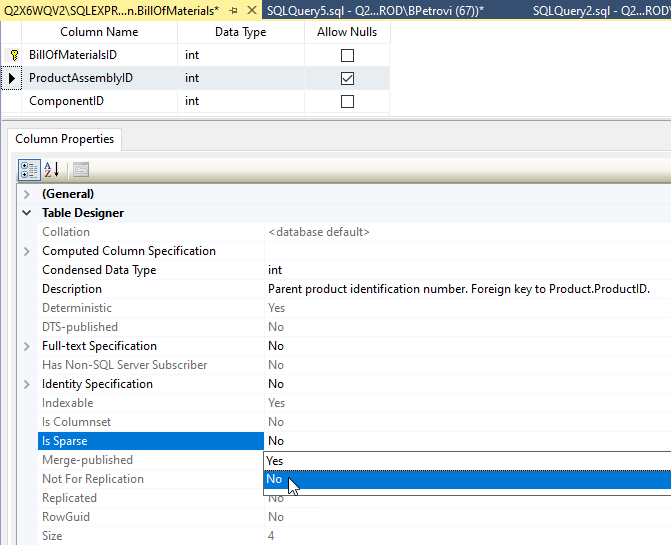 Now, if we execute the command one more time, it will be successful:

The bottom line here, don’t add sparse columns first – add column sets first and then sparse columns. That way you won’t have to do it the hard way. What’s really neat about this, our DML statements such as Select, Insert and Update can still work the old way by referencing the columns individually or we can do it using the column sets.

Let’s wrap things up with creating a custom data type. We’re going to create an alias data type which is based on another data type. Let’s just say that we have a need for storing URLs in our table and we want to create an actual URL data type. All we need to do is execute the code from below:

URLs are just characters, so the varchar data type is perfect for this. I’ve set the max value to 2048 because of this thread that I’ve found online which states that you should keep your URLs under 2048 characters:

We can see this new SQL data type if we head over Object Explorer, under Programmability, Types, User-Defined Data Types folder: 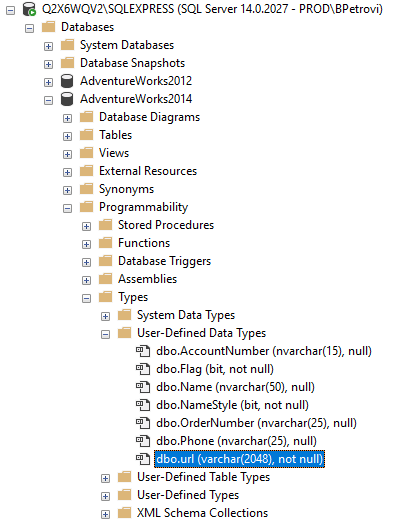 From here, we can start using the newly created data type. Just an example: 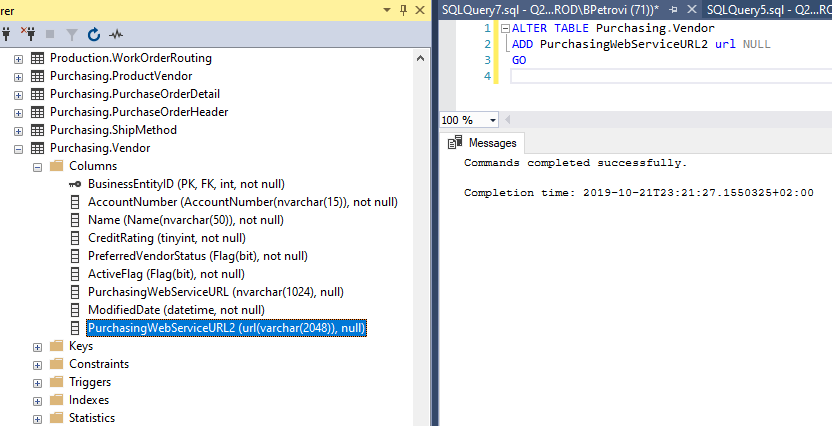 In this article, we learned how to implement SQL data types. We kicked off with an overview just to get familiar with some of the built-in data types. Then we talked about some stuff to consider when working with data types and conversion using Cast, Convert and Parse functions. We also jumped into SSMS where we showed how to convert an expression of one data type to another. We went through how to work with sparse columns, and then we also saw how to create our own custom data types.

I hope this article on SQL data types has been informative for you and I thank you for reading it.