This article discusses a simple solution of how to monitor SQL service availability across multiple servers and reporting. To build this I’ll use SQL Server with simple PowerShell script and cmdlets which generate JSON data and displays results in HTML

An integration of JSON in the relational world provides a robust platform for various automations using PowerShell automation framework. There are several JSON constructs available in SQL 2016 to manipulate and transform JSON data into relation data. The relational architecture in support of JSON provides several benefits in the non-relational world from the point of Migration and deployment. It is flexible because of simple syntax and lesser overhead to maintain and manage the JSON data. Parsing of relational data using XML gives the flexibility to manipulate huge data which will ease out the functioning of reporting

This article will provide an overview of the following technical implementations

JSON is an Open standard, lightweight data exchange based on a subset of the JavaScript Programming Language. It is easy for humans to parse and generate value out of each attribute. XML used to be a preferred choice for data exchange over the internet and it enjoyed the top spot for a long time but the gradual tendency of people to shift towards JSON due to its simple structure.

Microsoft provides a framework and useful cmdlets to work with JSON. The ConvertTo-Json and ConvertFrom-Json cmdlets play a vital role in data transformation. These cmdlets allow working with APIs or classes and returns or accept JSON as an input.

You can then use the ConvertFrom-Json cmdlet to convert a JSON-formatted string to a JSON object, which is easily managed in Windows PowerShell.

The ConvertFrom-Json cmdlet converts a JavaScript Object Notation (JSON) formatted string to a custom PSCustomObjectobject that has a property for each field in the JSON string.  JSON is commonly used by websites to provide a textual representation of objects.

Powershell 3.0 is integrated with Windows 8 released on 9/12/2011. This bundle in houses two new functions ConvertFrom-Json and ConvertTo-Json to support JSON.The ConvertFrom-Json is included in the module Microsoft.PowerShell.Utility, make sure that the module is loaded by doing Import-Module Microsoft.PowerShell.Utility before you use ConvertTo-Json. These are the default modules will be automatically loaded with your profile.

The next question would be how do I retrieve the available commands from a module?. There are instances that modules are not loaded due to the profile problem. The below commands ensures that the cmdlets are loaded and it’s available for use.

The below sample code retrieves the details of listed services from the remote server(s).

Let’s discuss the JSON data representation in a tabular format by importing the JSON file in SQL Server. The OPENROWSET(BULK) is Table Valued function to read data from JSON file. The SQL 2016 contains various JSON constructs for data manipulation and relational data transformation.

This section details the use of OPENROWSET(BULK) and OPENJSON(Bulkcolumn).The OPENROWSET read text value from a file and return it as Bulkcolumn. The Bulkcolumn is then passed to OPENJSON TVF. The function will iterate over the array values to return required values of each attribute.

Let’s execute the SQL to import the JSON data. The JSON file is saved in Unicode format hence have used SINGLE_NCLOB in the SQL. You can also make use of other bulk loading options such SINGLE_CLOB, SINGLE_BLOB depending on the type of the data stored in a file. The below SQL is an effort to define the use of inline JSON data processing. 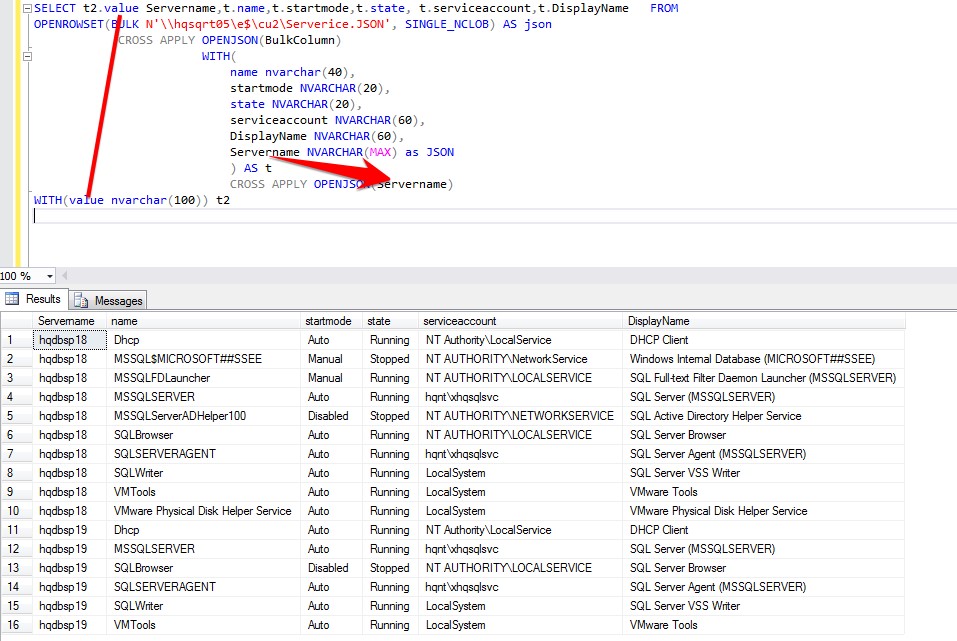 Processing is made much easier by using the available JSON constructs on referring JSON paths. In this case, the dollar sign ($) references entire JSON object in the input text for processing. The OPENJSON is a table-value function that parses JSON text and returns objects and properties in JSON as rows and columns. The OPENJSON function and with clause lets to define an explicit schema.

This is another way of processing the JSON text using JSON path references. 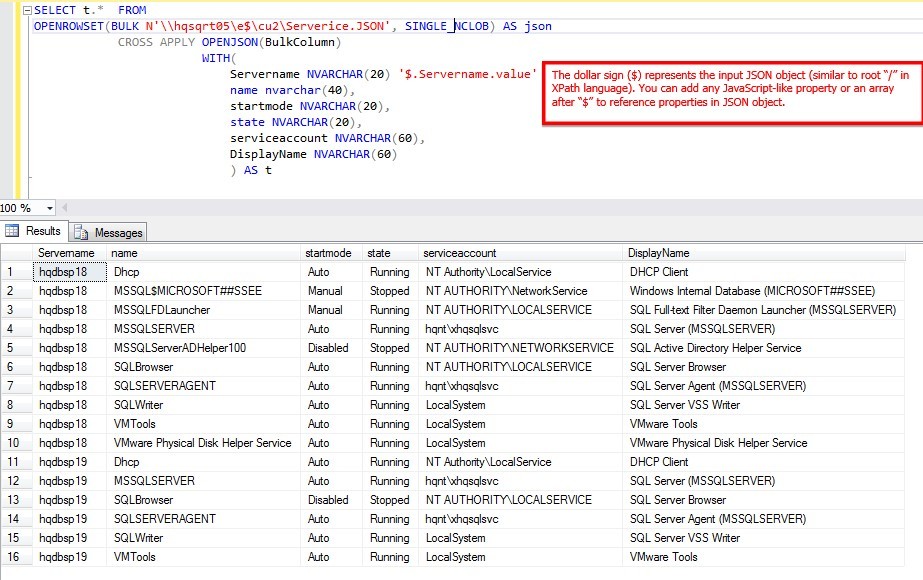 Using the FOR XML PATH the casting is done to the string in the result set but not on each column attributes this itself is a great improvement when you deal with huge data. The use of RAW clause which adds the new table row string at the beginning of each record and the ELEMENTS and the [td] column name help to set the cells tags in the HTML table otherwise, each tag would contain the column name. As you can see, using FOR XML PATH can improve the way we write our reports. 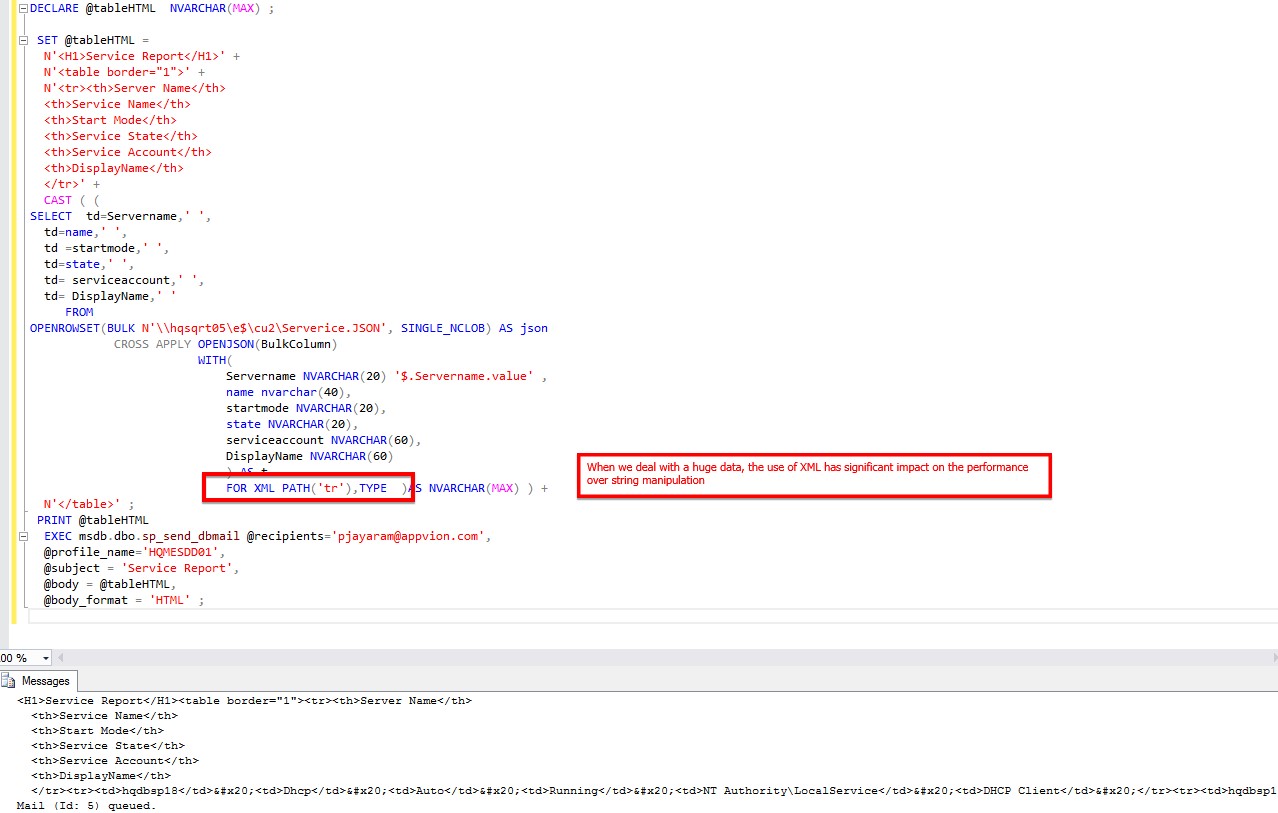 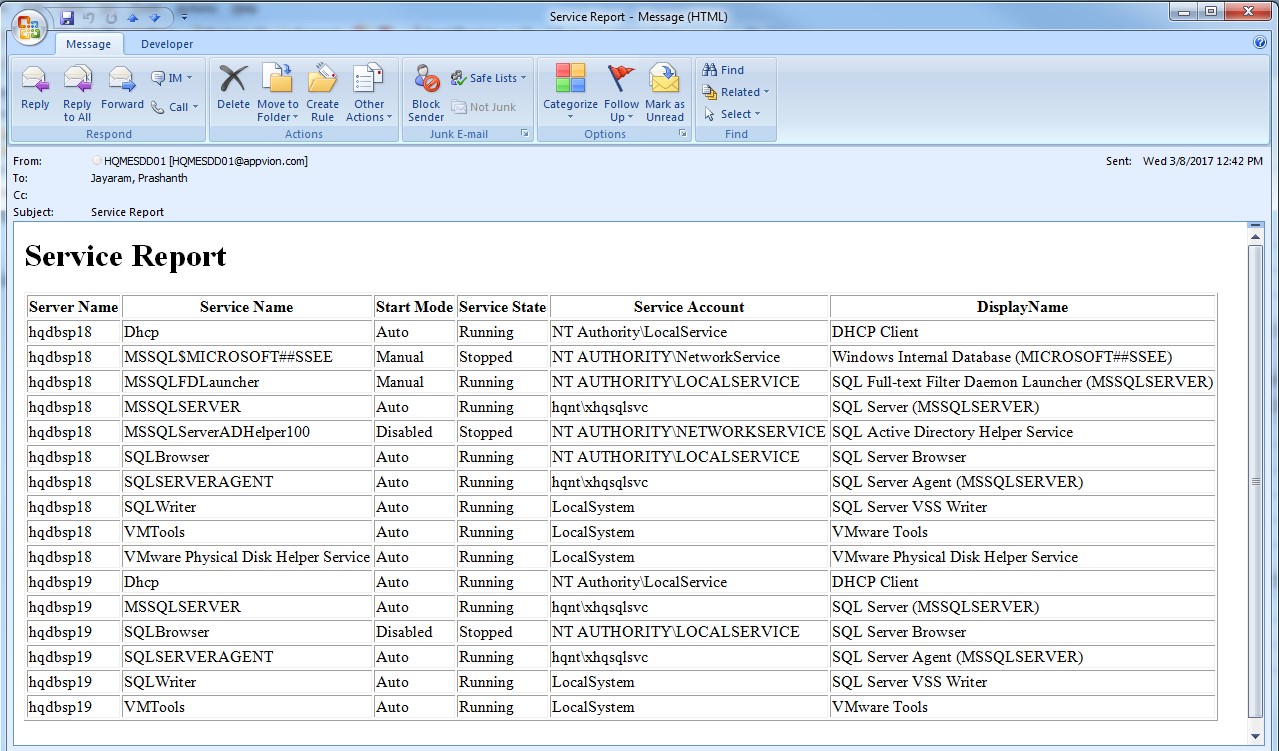 One of the important system parameters to be measured to increase the availability of the application is discussed in this article. The process, described in this article can be implemented by anyone who monitors large and complex environments across multiple servers as the script has the provision of making customization to the services list and server list.