One of the most popular complaints from developers to DBAs involves alerting, whether from third party tools or alerting built by other developers or DBAs in the environment. Building or using alerts for important applications, data layers, or processes within a SQL Server environment offer everyone benefits, but can become noisy if they’re architected poorly, or the purpose isn’t considered. In this article, we look at considerations for building effective alerts that tell us when something is wrong without creating situations where we learn to disregard them. We want to make sure that we respond when we need to, and not always be on high alert when there is no issue.

Imagine SQL Server writing to the error log every five seconds, “The Database, DatabaseName, is online and good to go!” In one minute, we would have twelve messages telling us that our database was fine and the very nature of such an alert would add overhead, such as space to store it, along with questions as to why we’re seeing something written to an error log, when everything is running smoothly.

In the popular children’s fable, The Boy Who Cried Wolf, we see a story that cautions us of a problem with too many alerts, especially when some generate false alerts – they may slowly train us to ignore them and when something problematic occurs, we don’t respond. For an example, in a OLTP environment, we may run a test transaction that processes identically to our application, but choose to use a very timeout to alert us if it doesn’t finish in the timeframe. If our timeout is much shorter than our application, we may receive too many alerts indicating that the transaction is taking too long, possibly training us to ignore this alert.

In the case of alerts, fewer is better, and especially in situations where we have limited time or resources to respond.

One-next step alerts should be completely eliminated with the next step automated. An example of this is a SQL Server agent job that fails with the only solution to this failure being “Restart the job” (if the job is built exclusively for this solution). There is absolutely no reason to send an alert that this job failed, if the job must be restarted if it failed; simply, automate the next step, which is restarting the job. If a DBA or developer wants to keep a record of failures, that’s one thing, but alerting when there is only one next step wastes time and resources (noise). 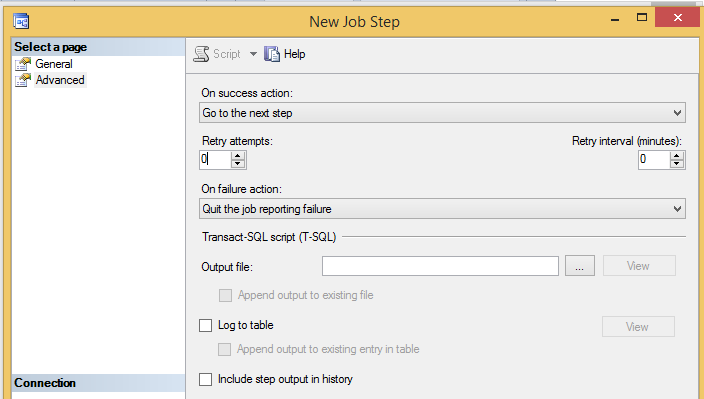 Keep in mind, that a SQL Server Agent job can retry a number of times. For other cases of automating the next step, we might need to write a script or application to do so.

SQL Server jobs allow you to set notifications on failure with the job itself.

There may be times where we want to log failures or errors, even if there is a next step to create a baseline. However, tracking baselines differs from alerting because we’re statistically collecting data before we assert that an error exists, or that an error is abnormal. Also, logging an error or issue doesn’t have to be constructed in a way that generates noise until we diagnose the problem exists, or that a problem is about to begin. To put this in a question form, suppose that I asked DBAs who used replication what’s the average amount of replication errors they get each day and they replied, “I don’t know.” If they don’t know the answer to that question, then it’s possible that two errors generated on one day is little to no issue, or that it’s a major issue; for instance, a query timeout error may be of little consequence, whereas the row cannot be found at the subscriber indicates a problem. Likewise, if DBCC CHECKDB fails, I want to know immediately.

This leads to the point that some alerts may be better suited around a threshold being crossed, such as a consecutive number of heartbeats failing as opposed to one heartbeat that fails (if the baseline shows that this happens). We can also expand this to cover a period of time – such as too many failed logins within a five period instead of over a day, relative to what our baseline shows.

Some Useful Tips and Questions