Back in my days at school, I followed a course entitled “Object-Oriented Software Engineering” where I learned some “design patterns” like Singleton and Factory. If you are not familiar with this expression, here is a definition of a design pattern from Wikipedia:

“In software engineering, a software design pattern is a general reusable solution to a commonly occurring problem within a given context in software design. It is not a finished design that can be transformed directly into source or machine code. It is a description or template for how to solve a problem that can be used in many different situations. Design patterns are formalized best practices that the programmer can use to solve common problems when designing an application or system.”

The particular design pattern this article is about can be used in multiple situations and we will review it in details in a few seconds.

In following sections, we will focus on the problem that we want to solve and on the general solution to that problem. This solution constitutes therefore a design pattern for the solution. Once we know this design pattern, we can specialize it to fulfill the needs of a particular situation and that’s what we’ll do in last section.

Now, it’s time to talk a little bit about the problem we want to solve in this article. I’ve been confronted to it more than once and I’m pretty sure that you’re are not stranger to it neither.

Let’s say we want to develop an application running T-SQL commands that will insert new records into a set of tables. This application can be a script generator, a monitoring or reporting tool or anything else you could imagine. We would like to be able to get back all data related to a particular execution of this application. Why would we do that? There can be multiple answers:

With this approach, we can divide complex code into smaller pieces in which the business logic is less complex and easier to manage. As we divide these pieces of code, we could also run the processing asynchronously. 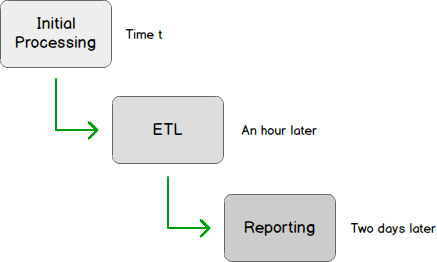 Now, let’s discuss some points that will lead us towards the entire solution for purpose better understanding. We will segment this solution into two distinct parts: the “what” and the “how”. The “what” consists in the objects we need while the “how” is the way we will use these objects. Using both together constitutes the actual solution to the presented problem.

What do we need?

As we need to be able to refer to an execution of the application and get back the results of that execution, this unique identifier must be stored in a table. We’ll refer to that table as the “execution log”.

But we can’t only log unique identifiers into that table because we might need to read other information to know which one we should use for further processing. You will find below a list of information I tend to keep in order to get back to a particular execution of an applications. This list is not static and you can either remove or add one or more items to it.

You can look at following T-SQL statement that corresponds to the creation statement for the ExecutionLog table using previous list.

With this information, we really can present, to a user, a subset of the entire execution log with only its own actions. We can also stop a cascading process by checking the execution success information: if the execution was not successful and we needed the results of this execution to perform an additional treatment on this, then it’s of no use to carry on…

How will we do it?

At this point, we’ve answered the “what” question: we exactly know what we need to address the challenge defined in this article. Now, let’s talk about the “how”: how will we make it happen?

We could write a set of T-SQL queries inside the application that will use the execution log, but this means that if we want to change a piece of code in these queries, we need to change it in every executable that works with this design pattern. There is, to me, a better solution to that problem.

Instead, we should create a stored procedure that will generate the unique identifier and store the information discussed above. We will call this stored procedure “LogNewExecution“. Here is the interface for such a function. Again, this can be customized to your needs.

When the application runs, it will call that stored procedure and the application will get back the unique identifier of its execution thanks to the @ExecutionId parameter.

The body of this procedure should contain a modified version of following query. This query essentially gets back information about caller and inserts it in conjunction with the value of @ExecutionName and @StartTime parameters.

As you can see in sample code above, there is no value inserted for ExecutionParams column of ExecutionLog table. Actually, we could consider that an update should be run in application as we could log execution even before parameter validation. If it might not happen, you should add a @ExecutionParams parameter to LogNewExecution stored procedure.

When application execution completes, no matter the outcome, the application will simply run an update against the ExecutionLog table to set values to the appropriate columns regarding the outcome.

Following diagram summarizes what we discussed so far. 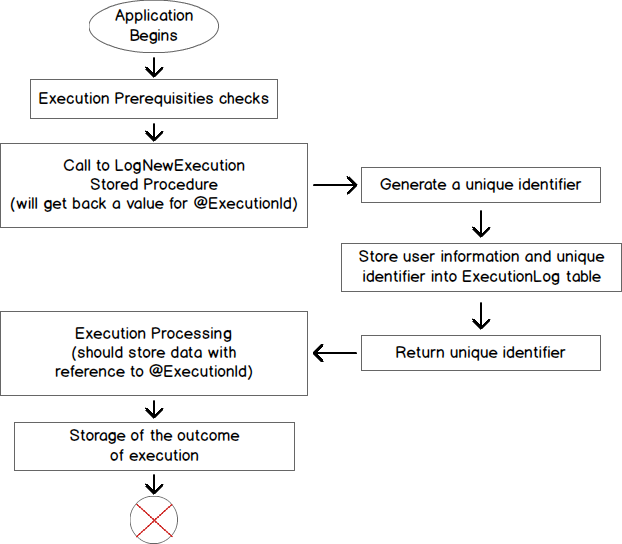 Before getting into the details of the design pattern implementation, let’s review what needs it will cover.

A while ago, I implemented an extended deadlock monitoring process that gets back deadlock XML graphs from Extended Events, stores it into a table and parses the XML to store extended details into another table. As soon as this process ends, we can run various reports as the occurrences by date or the most commonly implied application and so on. But we need to record these reports because we can’t keep all the collected deadlock XML graphs for obvious space consumption considerations.

But we could plan other kinds of reports than just deadlock reports, so let’s review some general facts about reporting:

This implies that output type and output path information have to be kept somewhere so that we are able to actually retrieve reports contents and process it.

Based on the description above, I specialized the design pattern presented in this article as follows.

Firstly, I extended the ExecutionLog table to add a ReportClass column so that I can filter records to only get reports related to deadlocks or whatever. I also added an OutputType and an OutputPath column. Here are two example usages of those two columns:

In addition to those changes, I needed to define the way to uniquely identify a report. To do so, I simply used an IDENTITY column. I used BIGINT data type just in case I would use it a lot in future days.

As I don’t think extended explanations on those columns are necessary, you will find below the T-SQL statement to create the actual ExecutionLog table:

I also changed a little bit the LogNewExection procedure so that it takes the three new columns (ReportClass, OutputType and OutputPath).

You will find attached to this article the script to create the schema, table and stored procedure presented in this section. You can run it against a test/dev database and test if it actually works as expected using following script.

Here are the contents of the ExecutionLog table after execution began:

Here are the contents of the ExecutionLog table after a failed execution:

Finally, the contents of the ExecutionLog table after a successful execution:

If we want to check what would happen if an error occurred, we can change following line:

As we can see, the outcome is set to ERROR for second report. If we look at the ErrorDetails column, we see following message:

Here, the aim is little different. I designed this execution log when I had to migrate databases from onr server to another for multiple SQL Server instances. The aim was initially to upgrade to a newer version of both Microsoft Windows Server and Microsoft SQL Server. Based on the criticality of machine and SQL Server edition, I could migrate via backup-restore, detach-attach or by setting up a database mirroring between source and destination then failover. Other migration solutions might come up in the future.

While I could have written a bunch of scripts that I just call to run a particular aspect of migration, I wanted to keep control over what is done during migration and also to limit the possibilities if somebody eventually takes the scripts and runs it on a wrong server, some time after the original migration happened. So, I preferred to create a script generator. I divided the process into three steps:

Based on the explanations above, we can quickly identify columns that have to be added to the ExecutionLog table presented as design pattern. There is actually only one column: ValidForNbDays. While this value can be seen as another parameter and could be put into the ExecutionParams column, it’s actually relevant to add this column as we want to easily check if the generated scripts would still be valid.

You will find below the table that I use for this.

We could review a testing batch like we did for previous example, but we won’t as it’s trivial to adapt this code to current implementation.

There are a lot of use cases that come to my mind in the field of generation that could use this table:

In this article, we’ve seen a standardized way to log execution of our processes. We’ve seen with two examples that it can be specialized to multiple fields and used in various situations.