Microsoft Baseline Security Analyzer is one of the tools provided by Microsoft to help administrators to scan systems (local and remote) for missing security updates and common security misconfigurations. It can scan the server operating system and SQL Server but also other products as well, such as Microsoft web server IIS.

This article is about the installation process as well as the way to use it. The procedure has been performed on a Windows Server 2012 R2 Standard Edition but may also work on other systems as per software requirements and compatibilities.

Here is what Microsoft says on its download page for the latest version of the tool at the moment this article is written:

Once the files have been downloaded, put them on the server you’ll use as a host for the tool, or on a network share and go to the server of your choice.

We can now run the installer corresponding to our language and architecture. The following window will pop up:

The next panel is the license agreement you will have to approve and click on “Next” button: 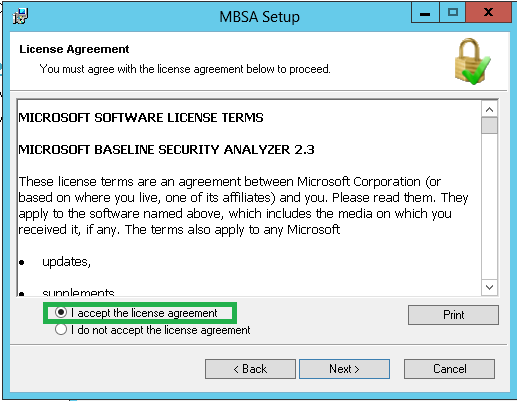 Now we must choose the destination directory. We can let it to its default or change it then click on the “Next” button:

Now we just have to confirm the install and let it run by clicking on the “Install” button:

Once the installation is done, you’ll get the following popup on which you just have to click OK:

Congratulations, Microsoft Baseline Security Analyzer is now installed. Let’s now see how to use it.

As we’ve just installed MBSA, we can see it in “Start Menu” or application screen:

Let’s run it and see what the graphical interface look like: 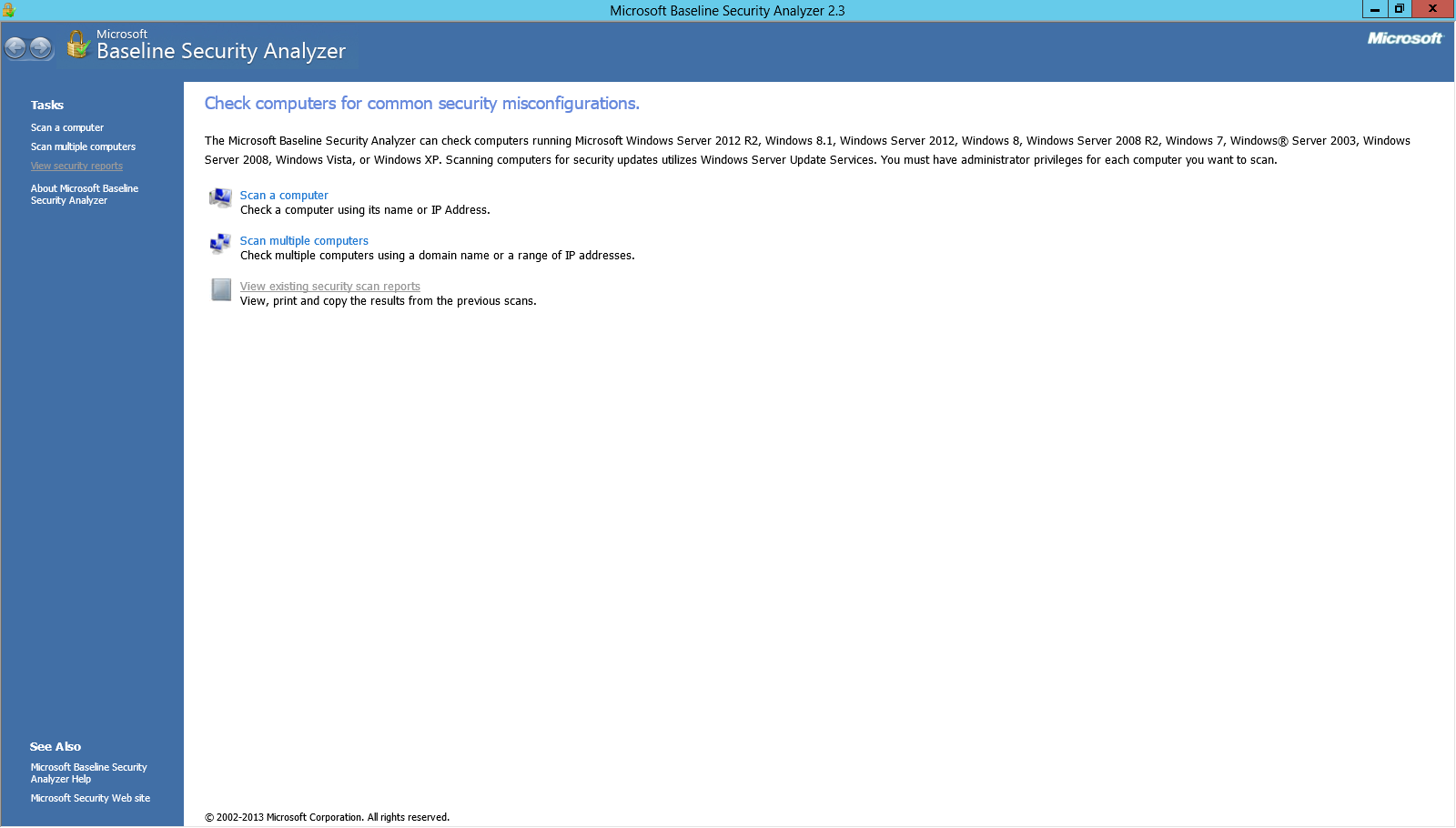 As we can see directly from the image above, this tool can:

This switches to another dialog, where you’ll need to provide some parameters. The parameters are a NetBIOS computer name, an IP address and the name of the final report which is can be parameterized. In addition, we can check or uncheck options. These options will change the behavior of MBSA. They are shown in the following image: 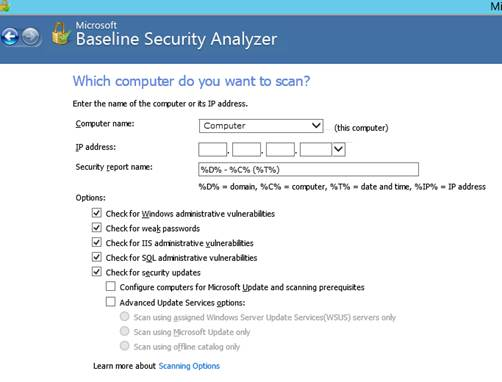 Once everything is set up appropriately, you’ll find a button at the bottom right of the screen called “Start scan”. Just click on it.

Here we go. The process can take several minutes. 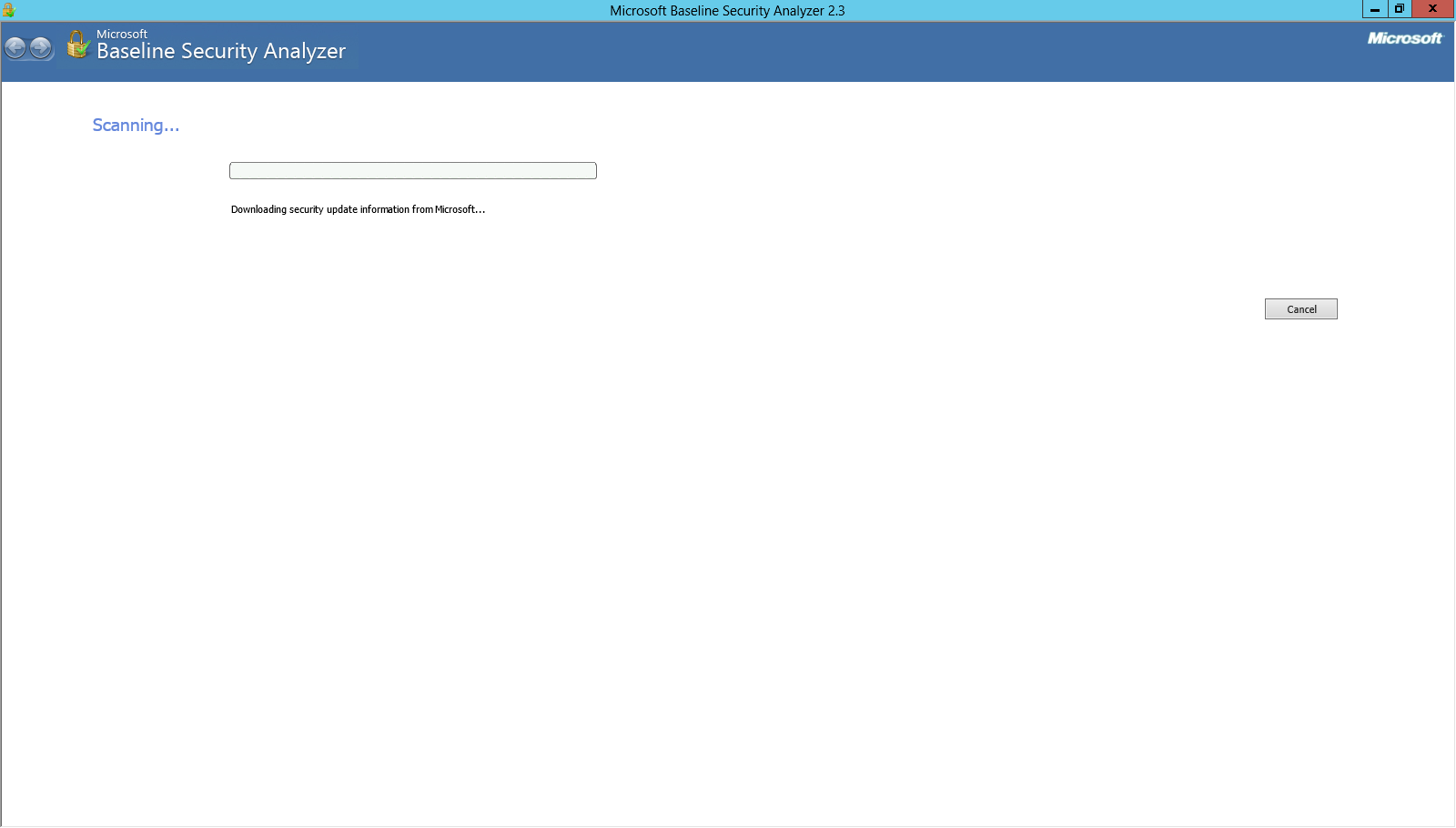 In my case, for a remote server and every options checked, as shown above, it took approximately 10 minutes to complete without taking that much memory (16 MB) or CPU (0%). 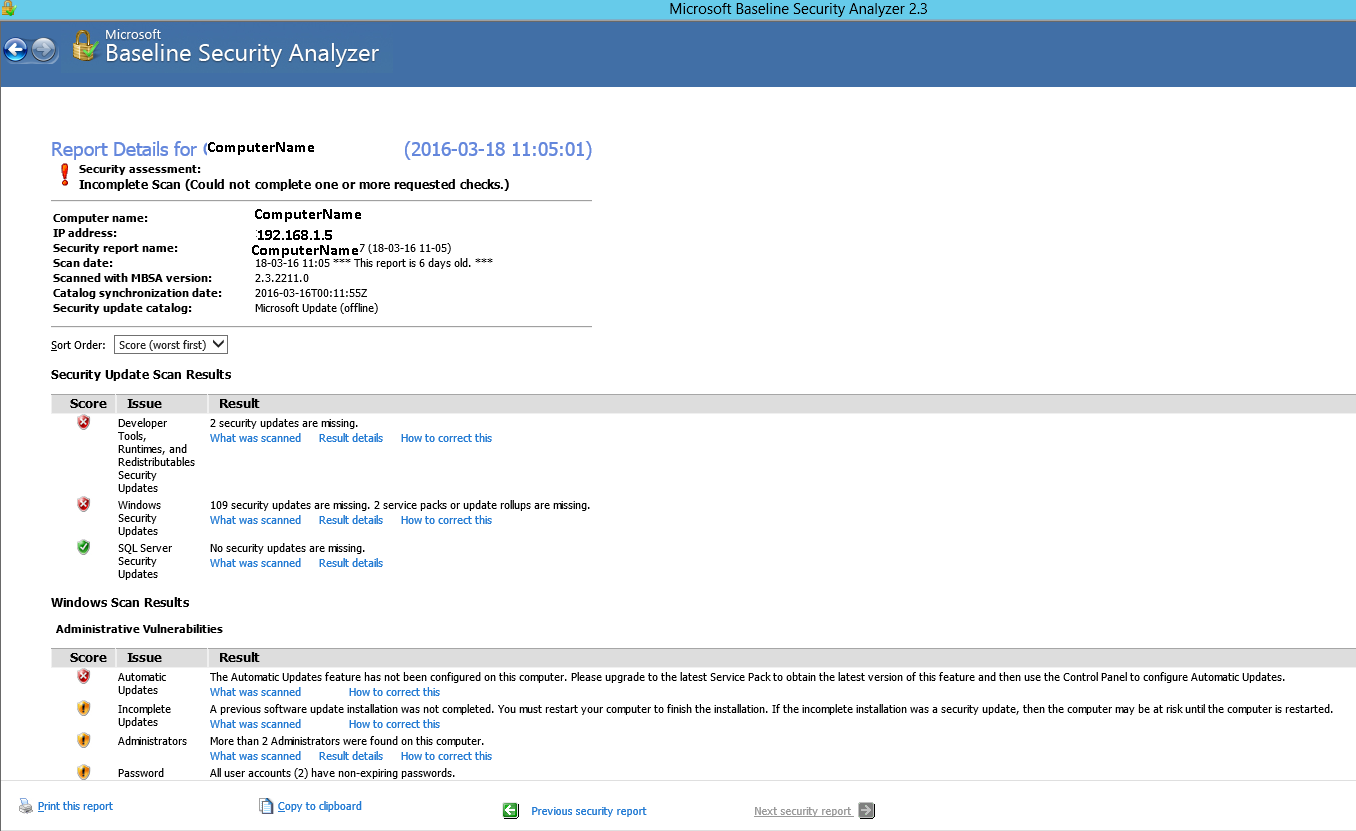 Unfortunately (or fortunately), I have to go through the whole report as it’s not an all green “everything is OK” message that is given by MBSA.

One thing we can see is that the report is organized by default with “worst first” which is to me very valuable. The next thing that is really helpful is that for every scan issue, we can see at least what was scanned, in some cases a detailed report may be accessible and/or eventually a way to correct the issue:

The “What was scanned” link opens an HTML description of the scanned aspect. Here is an example: 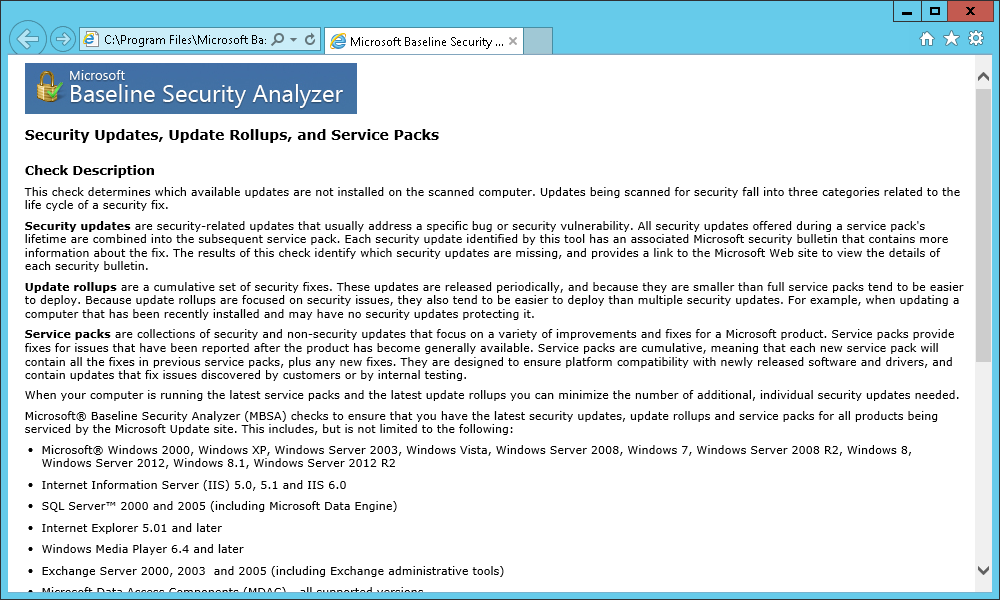 The “Result details” presents a detailed report of the analysis made by MBSA. For example, you will find this dialog displayed: 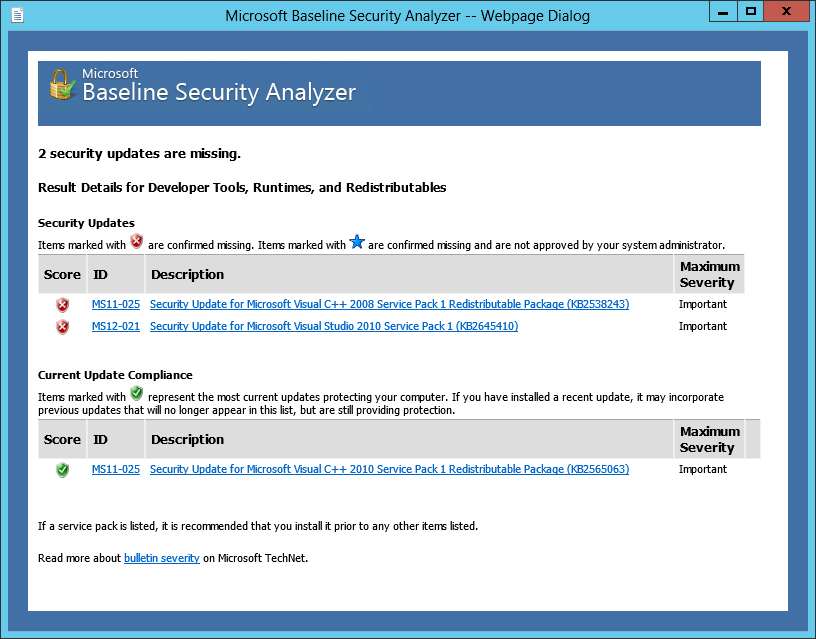 We can see here that there are missing updates. The action to take can be pretty straight forward but we have a “How to solve” link. Let’s see what is displayed: 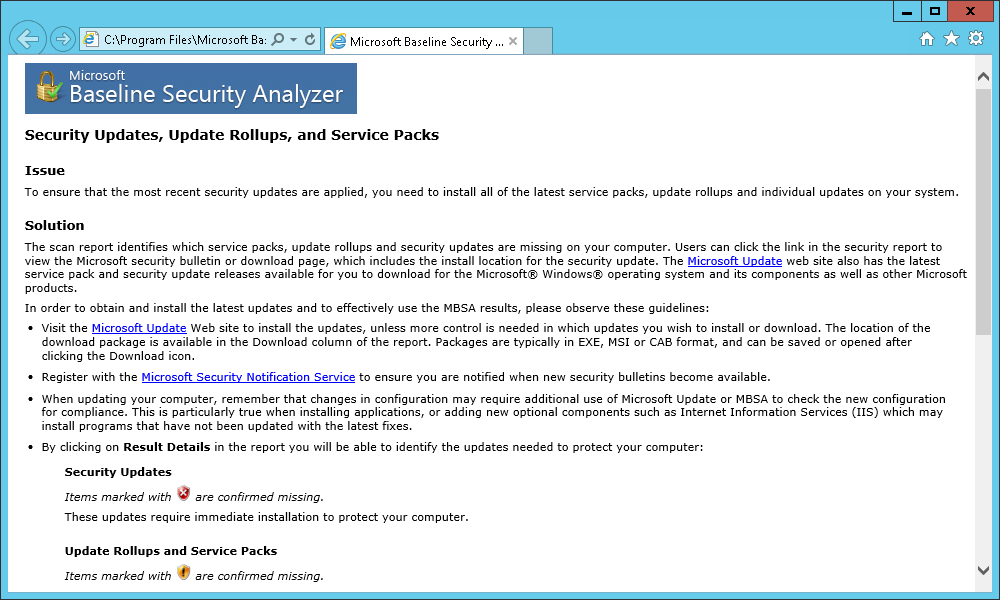 Other ways to run the tool: command-line

As the description stated, there is a command-line interface for the tool. Let’s introduce “mbsacli”. To run it, we have to open an invite or a PowerShell window and go to the installation directory of MBSA (or adapt PATH environment variable so that this folder is included).

Here is a sample command I used to run against a remote server:

I won’t go too long on this because I think that might not interest everyone, except those who would want to automate the process, plus I’ve found, on the web, a script by Ben Wilkinson that seems to be much handier, but it’s just my opinion.

I invite you to read the description of this script and test it in a non-production environment.

Each time I ran one of them, I was a little dubious on the output because there are recommendations that are far away from practical business needs and capabilities or that are justified in most cases except the particular one which we obviously meet.

To me, those tools are not meant to be used for a strict assessment that must absolutely succeed but rather like as a set of indicators. Indicators that don’t succeed can be explained or not. When they can be explained, they need to be investigated in two ways: understanding and trial to explain. We are humans and can’t know everything. So, when a new aspect is raised, it’s the opportunity to learn from it, its purpose, its impact, its dependencies and the problem that it can cause. Once it’s done, you have all the cards in your hands to decide whether there is an acceptable reason to stay as is or not.

Let’s illustrate this with an example. I found in the MBSA report that “Internet Explorer zones do not have secure settings for some users”. When I click on the result detail, it shows me the service account used for SQL Server (which cannot connect in another way than as a service) and that the setting concerns ActiveX. I don’t think it’s a problem at the moment as it’s a service account, no interactive session may run and no permission of xp_cmdshell is allowed in my installation. This reason seems acceptable to me and I will document it for the server on which I ran the tool. The documentation will be reviewed on regular basis and the reason will be reviewed each time. With experience or evolution of the situation in the environment, I may realize it was not an acceptable reason and it must absolutely be changed. 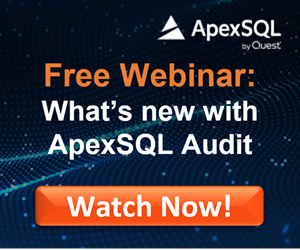