TempDB usage can be considered as a performance bottleneck for workloads that use SQL temp tables and table variables intensively resulted in heavy IO usage. A valuable alternatives for the SQL temp table and table variable are SCHEMA_ONLY Memory-Optimized tables and the Memory-optimized Table Variable, where the data will be completely stored in the memory without the need to touch the TempDB database, providing the best data access performance. SCHEMA_ONLY Memory-Optimized table and the Memory-optimized Table Variable are stored only in the memory with no related component in the disk. It involves no IO activity or TempDB utilization. It can also participate in the transactions without the need to log the transactions.

In this article, we will prove practically that the SCHEMA_ONLY Memory-Optimized Table and the Memory- Optimized Variable Tables are the best replacements for the SQL temp tables and variable tables with better CPU, IO and execution time performance.

SQL Server In-Memory OLTP, also known as ‘Hekaton’, is a new in-memory processing technology that was introduced in SQL Server 2014, integrated into the SQL Server Database Engine and optimized for an Online Transaction Processing (OLTP) workload.

Also, many other features are supported now in SQL Server 2016 such as

We will start our demo by preparing the SQLShackDemo test database to host Memory-Optimized tables. This can be achieved by adding a new filegroup that will contain the Memory_Optimized_Data and create a data file under that filegroup. Once the filegroup and database data file created, we will enable the MEMORY_OPTIMIZED_ELEVATE_TO_SNAPSHOT option that is used to lessen the need to have table hints on the Memory-Optimized Tables:

You can verify that the Memory-Optimized filegroup is added or add it from the Filegroups page of the Database Properties window as follows:

After that, we will create the Memory-Optimized Table by turning on the MEMORY_OPTIMIZED option on that table and set the Durability to SCHEMA_ONLY as mentioned previously to simulate the case of SQL temp table, where the table schema will be recovered only in the case of restart or crash:

We will create also a normal physical table that will be used to store the data temporarily:

And to complete the full scenario, we will create five stored procedures, with simple INSERT statements to fill the five tables types mentioned previously. In the case of the normal SQL temp table, variable table and Memory-Optimized Variable Table, the table definition will be included within the stored procedure itself as in the below script:

To perform our testing, we will execute the five stored procedures and use it to insert 20000 records each time, leaving 5 seconds delay between each execution to make it easy for us to get the performance difference between it. We will use the PerfMon performance counters monitoring tool to check the performance of these tables, where we will monitor the Processor and Log Bytes Flushed/Sec counters to get the CPU and I/O of each execution as follows:

It is clear from the following PerfMon window that the normal SQL temp table consumes the CPU and I/O resources and took long time to finish compared to the other tables types. You can also derive from the same image that the Memory-Optimized SQL temp table and the Memory-Optimized Variable Table consumed the minimum I/O and CPU resources compared with the rest types of tables: 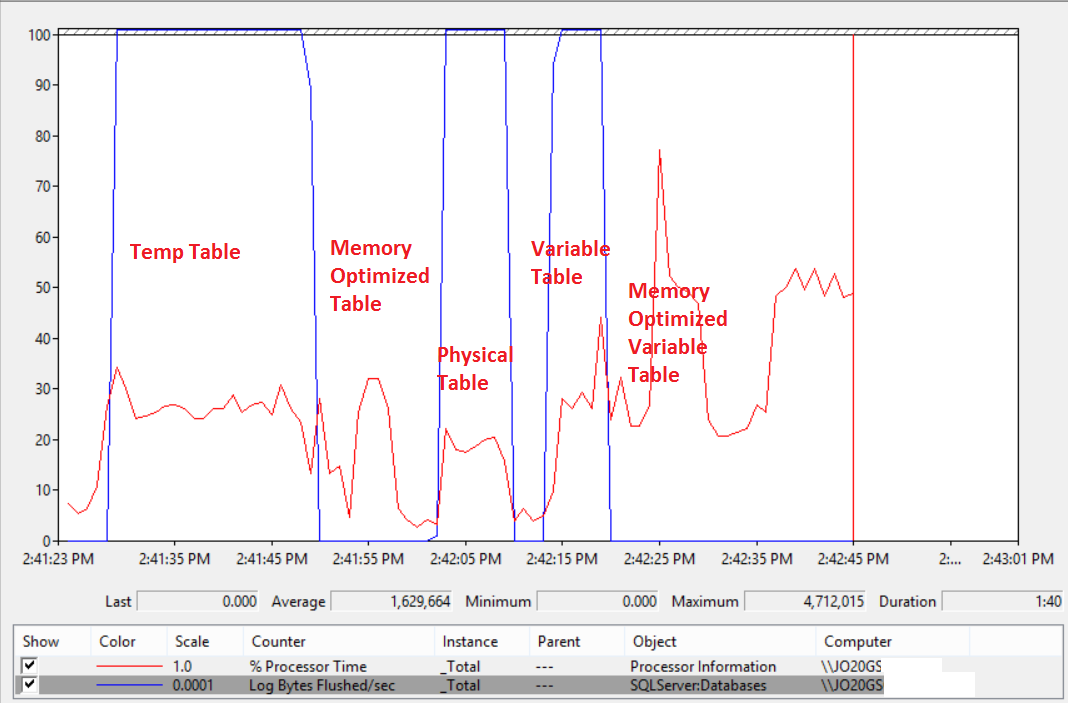 The previous script can be modified to show the duration of each stored procedure’s execution as below:

The result of the previous script will show us that the SP that used the normal SQL temp table is taking the longest execution time compared to the ones using other tables types, and the ones that use the Memory-Optimized SQL temp table and the Memory-Optimized required small period of time to insert 20000 records. Although the SP that uses the Variable table required the minimum time, it consumes the I\O and CPU resources:

In-Memory OLTP is a new feature, introduced in SQL Server 2014 and enhanced in SQL Server 2016 by addressing most of the limitations, that stores the data directly to the memory, eliminating the locks and latches occurred during the reading process and providing the best data access performance. From the testing scenario we performed, it is clear that using the SCHEMA_ONLY Memory-Optimized Table and the Memory-Optimized Variable Table excelled on the rest of tables types in having the best performance that can be seen by the minimum CPU and I/O resources consumption and the minimum execution time required to fill these two tables types compared with the other tables, making it the best alternatives to normal SQL temp tables and variable tables.