In this article, we will describe the relation between the Set Theory and SQL Server Set Operations

Introduction to the Set Theory

A set is an exactly defined collection of objects. Objects in this collection are called members or elements of the set. The significant point about the set is that the members should be defined exactly and clearly. Definitions whose members are not defined explicitly, it does not identify a set. For example, months of the winter season specifies a set, but some months of the year do not specify a set. Sets are frequently named with capital letters. The members of the sets can be written between the curly braces and separated by the commas. This representation type called Tabular or Roster Form. In the following, the X set represents months of the winter season:

Also, the sets can be represented by the Venn diagrams: 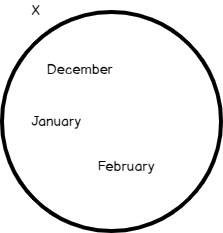 Universal and Empty set concept in the Set Theory

The Universal set is a particular type of the set and the theory assumes that Universal set covers all sets members in the universe and it represented the U letter. On the other hand, if a set does not contain any member, this type of set is named as an Empty set and it is denoted by ∅ or { } sign.

When we apply four operations to the numbers, we are able to obtain new numbers. In a similar context, we can apply some manipulations on sets. In the next sections, we will learn the essential ones and we will also explore the similarities to the SQL Server Set Operations.

According to the Set Theory, we can union two sets so that we can obtain a new set that contains all members of the unioned sets. In the below example, we will define A and B sets and the members of these sets will be fruits:

The union of the A and B sets will look as follow and it is denoted by A U B:

A U B = {Apple, Orange, Strawbery, Lemon, Avocado, Grapefruit, Apricot}

The following Venn diagram illustrates A union B: 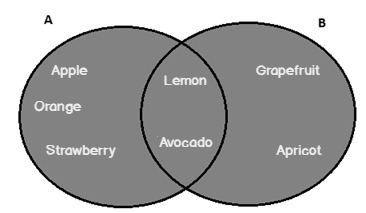 At this point, we must emphasize one issue, the common set members are shown only once.

In the SQL Server, the UNION operator concatenates the resultsets of the two tables and it eliminates the duplicated rows from the resultset. In fact, the UNION operator in SQL Server acts as like as the union operation in the Set Theory. Suppose that, A and B sets are represented by tables in SQL Server. At first, we will create these tables and then add the expressions that similar to A and B set members:

When we union these tables the resultset will be similar to A union B result: 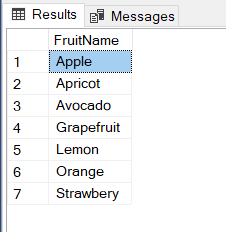 When we change the order of the tables in the query, the result set will not change: 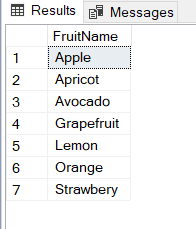 The Intersection of sets

The result will be Lemon and Avocado; these two members are common members for the A and B sets:

The yellow shaded area illustrates the intersection of the A and B sets in the Venn diagram: 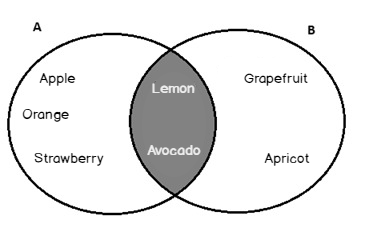 In SQL Server, the INTERSECT operator implements the intersection logic of the Set Theory to tables. Now, we will find the intersection of the TABLE_A and TABLE_B with help of the following query:

The resultset will not change when we change the order of the tables:

The members that are in a set and are not exist in the other are called a set difference in the Set Theory. The result of the A difference B set will be as follows and it is denoted A / B:

The blue shaded area illustrates the result of the A difference B set in the Venn diagram: 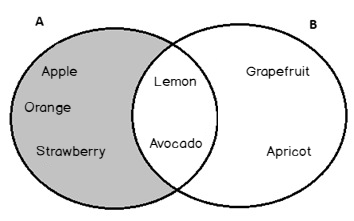 The purple shaded area illustrates B difference A in the Venn diagram: 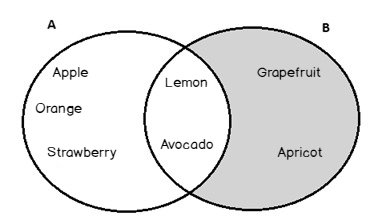 In SQL Server, with the help of the EXCEPT operator, we can obtain the difference between the two tables: 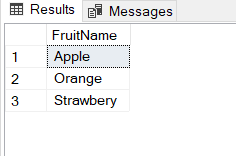 When we change the order of the table, the result set will be changed:

In this article, while the Set Theory is an abstract concept, we have seen it became a concrete reality in relational database theory.