In this article, I am going to explain what change tracking is in SQL Server and why do we need it. I will also illustrate the same using some practical examples using triggers in SQL Server. Change tracking as the name suggests, is a mechanism that helps us to identify the changes in the database as the application grows. In other words, it enables us to have a history of the changes that have been made to one or more tables in the database. The changes can be considered as either INSERTs, UPDATEs, or DELETEs.

Now that we have some idea about how the triggers will work, let us first create the database and tables on which the triggers can be installed. You can execute the script below to create the Users table and insert a few records into the table. 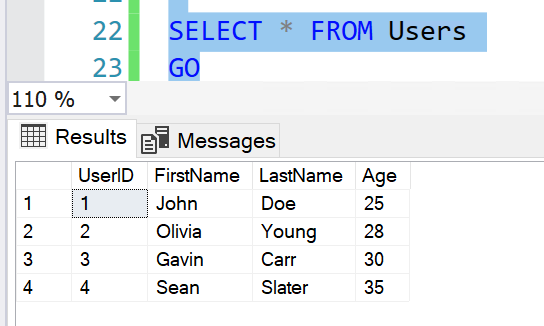 As you can see in the script above, we have specified the trigger to fire on insert on the table Users. As soon as there is a new record in the Users table, the trigger will fetch the UserID of that record and insert it into the ChangeTrackingHistory table. You can also verify that the trigger has been installed on the correct table by expanding the Triggers under the selected table on the Object Explorer. 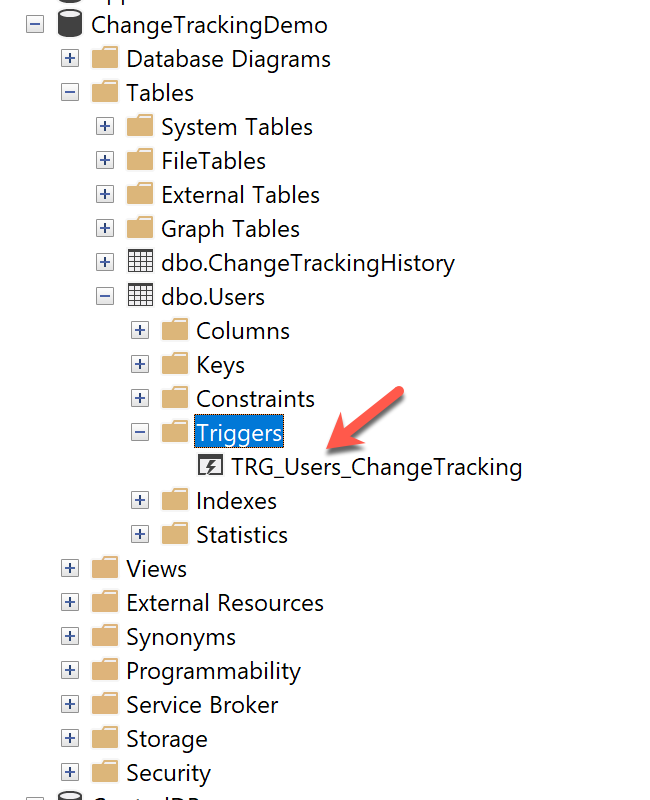 Inserting records in the Users table

Let us now see this in action. I am going to insert a record in the Users table and verify the data in the ChangeTrackingHistory table.

So far, we have seen that our trigger handles the insert statements well. Let us now modify our trigger such that we can also capture the records that are deleted from the Users table. In order to do that, we are going to modify the select statement inside the trigger to fetch data from the deleted table. You can use the following script to modify the trigger to capture deletes to the table.

Deleting records from the table

Let us now delete a record from the table and view the changes in the ChangeTrackingHistory table.

As you can see that the UserID of the deleted record has been captured in the ChangeTrackingHistory table.

However, if you take a look at the ChangeTrackingHistory table now, you can see that we have two records that are inserted and deleted, but there’s no way to identify what was the operation performed in each of those records. Without this information, the change tracking table makes no sense because after few operations it would be almost impossible to identify the operations performed on the records and the purpose to track the changes will not be fulfilled. To overcome this, we can add a new column Operation in the ChangeTrackingHistory table that will store the nature of the operation performed on the table while capturing the UserID. It will help determine whether the record was inserted, updated or deleted.

You can use the following script to update the table to add the new column and the trigger to capture updates, along with inserts and deletes. The logic behind capturing updates is that SQL Server first deletes the old record and then inserts a new record with the updated value. Thus, in case of an update, both the inserted and deleted tables will hold the same UserID.

Let us now update a record in the Users table and verify the changes.

We can also capture the operations for the inserts and updates from now on.

Now, this solution can be used to track changes to an existing table when there are any operations performed in it. You can also modify the script to capture only the operations that are of interest to you. Although this is a very basic script, there is always some scope for improvement in this solution.

As mentioned earlier, there is a provision for improving and optimizing the above trigger, but these are beyond the scope of this article. Just to name a few, you can consider the following improvements that can be implemented to make this solution more robust.

In this article, we have understood what is change tracking in SQL Server and the underlying concept behind using such a mechanism. We have also seen various change tracking solutions as offered by Microsoft out of the box directly. Although you can use the above-mentioned solutions, I prefer using triggers for some of my data applications as it allows me to have more control over which data to capture and which one to reject. I would suggest reading another great article: Creating a SQL Server audit using SQL Server Change Tracking that explains how we can use change tracking in SQL Server to create an audit trail.