In previous articles of this SQL Server Audit series (see the TOC at the bottom), we discussed the main concept and real-life needs for having a SQL Server Audit solution. After that, we went through the different methods that can be used to audit the SQL Server instances and databases. In this article, we will show how to take advantages of the System-versioned Temporal Tables feature to audit database table DML changes.

SQL Server System-versioned Temporal Tables, introduced the first time in SQL Server 2016 to replace the Change Data Capture and Change Tracking features, is a new type of change tracking table, in which full history about the changes performed on the table’s data will be stored, and the validation of the recorded rows will be managed completely by the SQL Server Engine. System-versioned Temporal tables can be used to recover inadvertent data changes, to generate historical reports for analysis purposes or simply to review the current state and the full history of the changes that are performed on each row for auditing purposes.

When you configure a database table with System-Version Temporal Table feature, two copies of the table will be created. The main Temporal table will be used to store the current version of the table rows. On the other hand, the History table, linked to the main table, will be created automatically with the same schema as the main Temporal table and will be used to store the changes history for each row from the main table, without being able to perform any change on the History table manually.

System-Versioned Temporal Tables can be enabled during the table creation process using the CREATE TABLE statement or on an existing table using the ALTER DATABASE statement. To be able to enable System-Versioned in a table, the table should contain a primary key, two not-nullable datetime2 period columns that are defined as GENERATED ALWAYS AS ROW START or END, and passed as parameters in the PERIOD FOR SYSTEM_TIME during the table creation process.

The following CREATE TABLE T-SQL statement can be used to create a new main Temporal table, with the EMP_ID column as the Primary Key, two period columns that are filled automatically by the SQL Server Engine, and finally create a history table with the same schema as the main Temporal table then enable the SYSTEM_VERSIONING feature, as shown below: 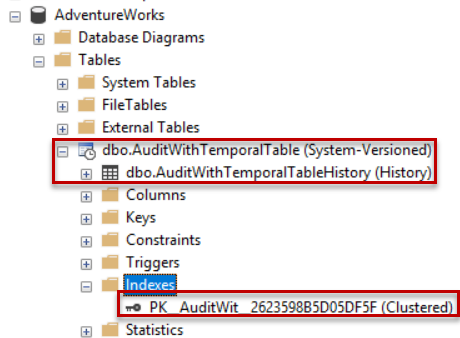 In order to show how we can use the System-Versioned Temporal Table in auditing the different changes that are performed on a database table, we will fill the created main Temporal Table with few records, using the INSERT INTO T-SQL statement below:

Assume that you are requested to perform a number of changes on the existing table’s data, using the UPDATE T-SQL statement below:

It is clear from the previous result, that the System-Versioned Temporal Table feature can be easily used to track and audit the changes that are performed on the tracked main Temporal Table, where it will keep all versions of each row. In addition, it can be used to recover from inadvertent changes by providing us with the values before the change. For example, we mistakenly update the phone number of the employee with Emp_ID value equal to 5 with a name rather than a number. To fix that error, we can get the previous value from the history table and revert the update again as shown below:

If you check the main and history Temporal tables again, you will see that a new record will be written to the history table, that contains the second version of the modified row, that is closed with the new update statement time as the period End time, in addition to the previous version of that row, as shown below: 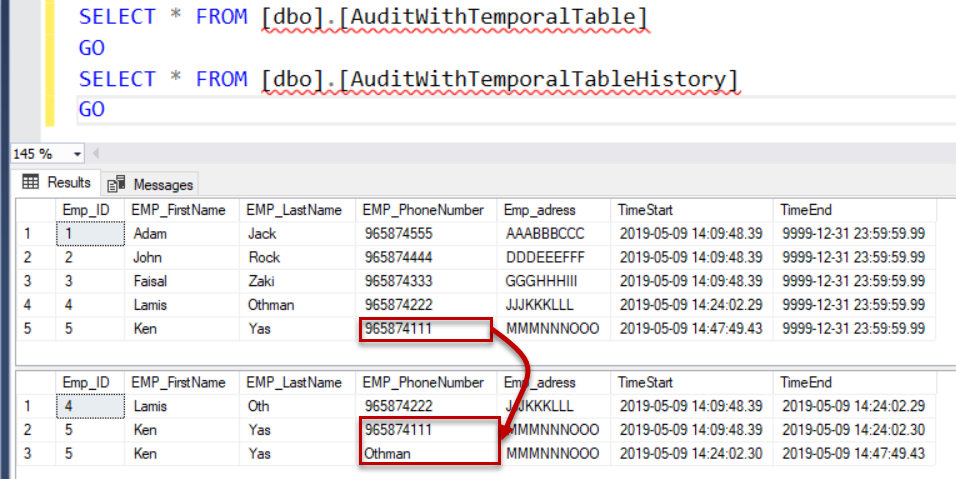 But what if I don’t need my manager or the security team to see that I have mistakenly performed the corrected update. Let us try to delete that record from the history table, using the DELETE statement below:

You will see that it will not allow us to delete the history data that is stored in the history table. This limitation makes the System-Versioned Temporal Table feature a robust SQL Server Audit solution.

System-Versioned Temporal Table can be also used to track the DELETE operations that are performed on the main Temporal table. If we run the below DELETE T-SQL statement to delete the employee with Emp_ID value equal to 3 from the main temporal table:

Checking the data from the main and history Temporal tables, you will see that the record will be deleted completely from the main Temporal table but it will be written before being deleted to the history table and marked as closed by setting the end time as the time of the DELETE statement execution, as shown below: 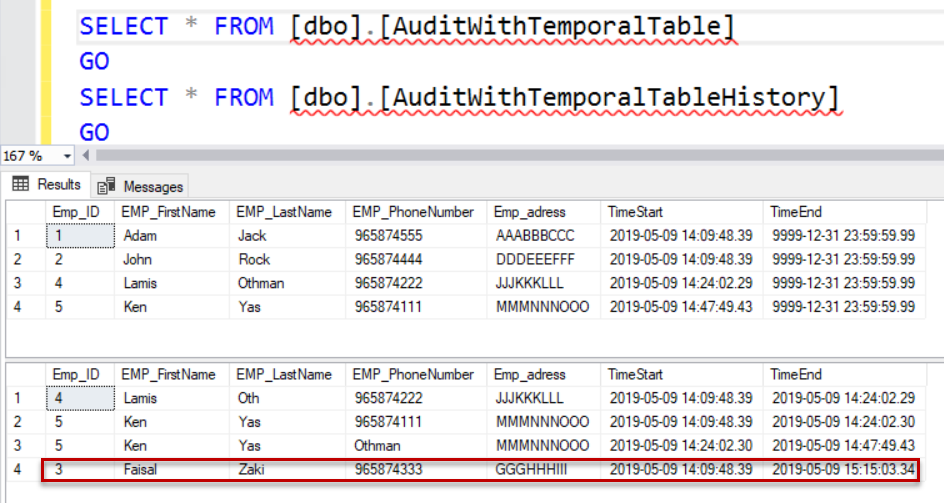 SQL Server 2016 introduces a new clause FOR SYSTEM_TIME  to the SELECT statement that helps in querying historical data from the main and history Temporal table, that can be used with five sub-clauses to specify the required period of time. For example, the FROM…TO clause that will return all active rows within the provided time range, regardless of the action starting time. This is achieved by performing a union between the main temporal table and the history table, as shown below:

And the retrieved result will show a list of all versions for each row, including all modification performed on these rows, as shown below:

You can see from the previous SQL Server audit result that the System-Versioned Temporal Table feature can be easily used to track and audit changes performed on the table’s data. But these results contain no information about the type of these changes. In addition, the historical data and the main data will be stored in the same database, which makes it less secure auditing solution. On the other hand, no option in this feature to audit the DDL changes or the changes that are performed at the SQL Server instance level.

In the next article of this SQL Server audit series, we will show how to audit the SQL Server using 3rd party options.

He is a Microsoft Certified Professional with a good experience in SQL server development, administration, performance tuning, monitoring and high availability and disaster recovery technologies. Also, he is contributing with his SQL tips in many blogs