In this article, we will explore the Bulk Copy Program tool that is also known as the SQL Server BCP tool. BCP allows us to export data into particular flat-file formats from SQL Server, and it also enables us to transfer data between different SQL Server instances or into the SQL Azure.

Either exporting or importing the data is among the most needed operations of the database persons. In order to achieve this operation on SQL Server, we have various tool alternatives. Such as SQL Server Integration Services (SSIS), SQL Server Management Studio (SSMS), OPENROWSET function, and BCP are the first options that come to our minds. SQL Server BCP is a very simple command-line tool that exports table data into flat files from SQL Server, or it can import data into the database tables. However, when we want to use the BCP for the giant data transferring operations we might face some performance problems. For this reason, in the next sections of this article, we will mainly focus on how to improve the performance of the data transferring operations for the tables which have a huge number of rows.

For the examples in this article, we will create a table and populate it with 100 million rows. The following script creates the SalesPerson table and we can also use ApexSQL Generate to generate 100 million test data.

On the other hand, we will use the Adventureworks sample database for the first look examples.

A first look at BCP

As we stated before, the BCP is a command-line tool and as a first step, we need to check the installed version of this tool. The bcp /v command gives the version information of this utility. 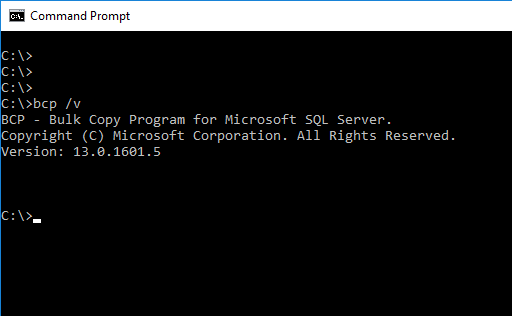 If the installed version is older than the last version, we can download and install the latest version from the Microsoft website. The main capability of the SQL Server BCP is not much complex because it can only run with several arguments. The syntax of the BCP is like below:

For example, if we want to export any data of a table to a text file, we have to specify the table name, the out option, and the data file. The following command will export the Production table into the specified text file.

In the above script, we have also used some additional parameters:

-T: Use the trusted connection

After the exporting operation, the text file will look as below: 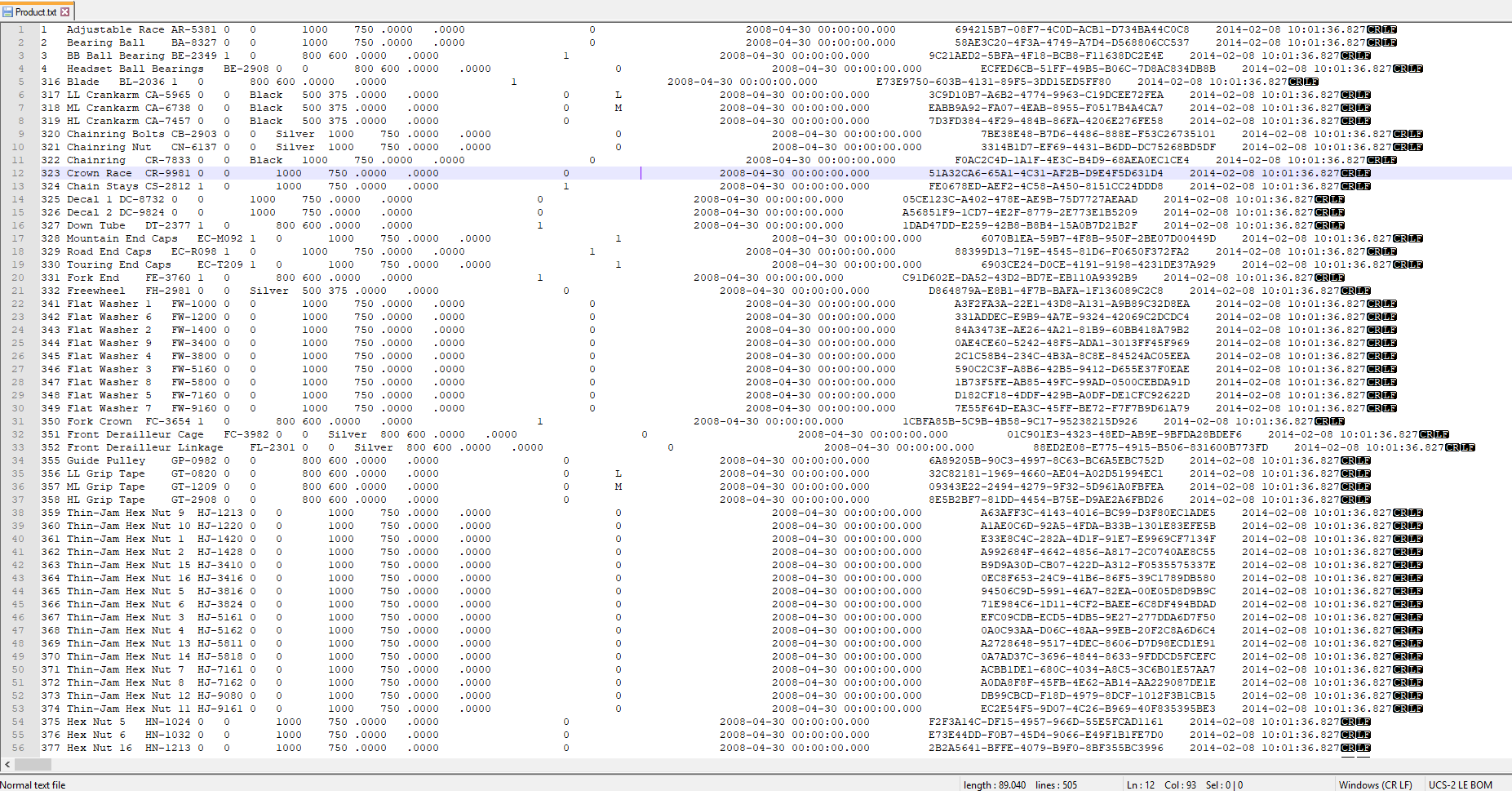 At the same time, we can export result sets of the queries through the queryout parameter so that we can filter the data or join the tables before exporting operation.

Using the BCP to import data into the SQL Azure

We can use BCP to import data into SQL Azure. The following command will import the Production table text data into the SQL Azure. The only change is to use in the argument and it specifies copy the data from a file into the database table. 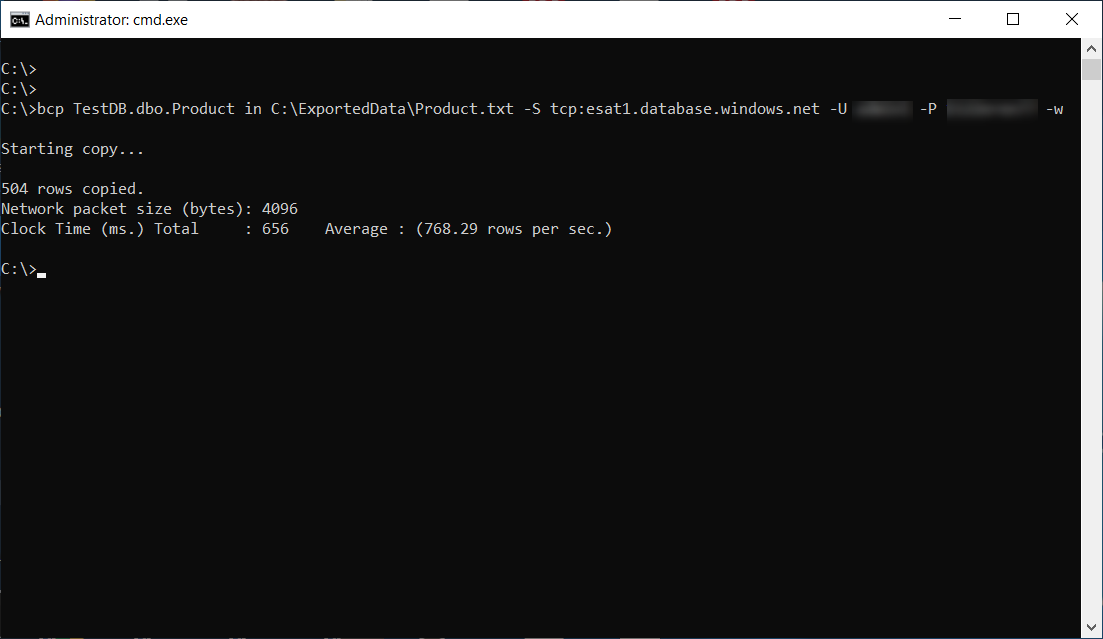 The imported data can be seen in the query editor of SQL Azure.

Use the SQL Server BCP to export big tables data

In this example, we will export the SalesPerson table data into a text file. This table includes 100 million rows and it’s size is about 7.5 GB. 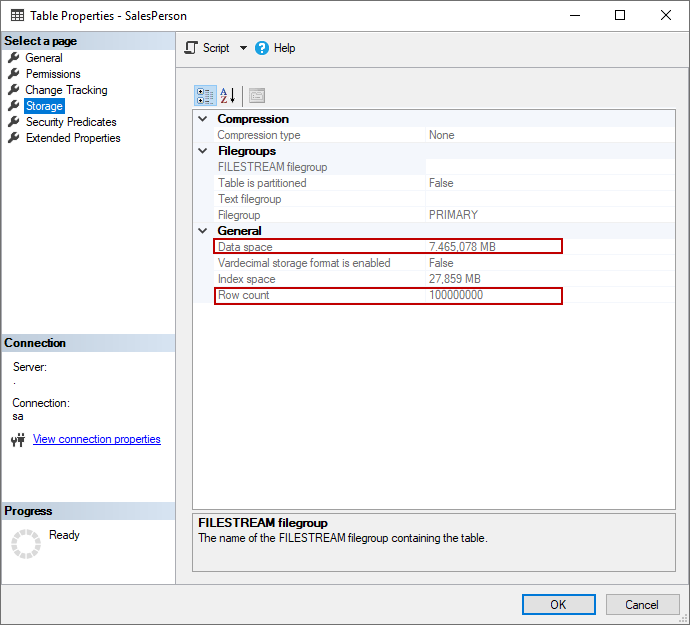 In our first testing, we will run the SQL Server BCP with default values in order to export 100 M rows. 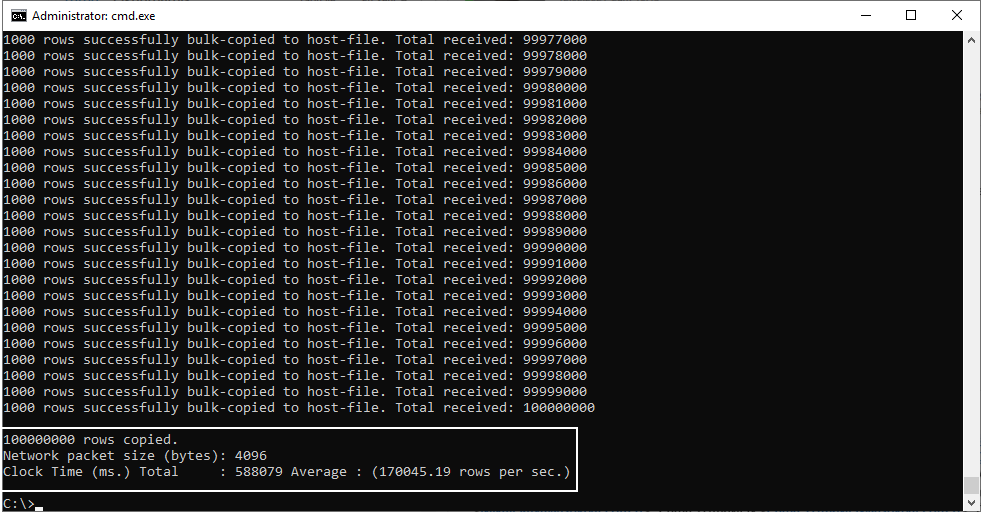 As we can see in the above image, the export operation has completed about 588.079 seconds and it has exported 170.045 rows per second. The network packet size configuration allows us to specify how much bytes data is sent out by the SQL Server. The –a parameter changes the packet size individually for the bcp data transfer session and might help to increase the performance of data transfer operations. The default packet size is 4096 bytes and we will increase this number to 32.728 bytes and it will affect the performance of the data exporting positively. 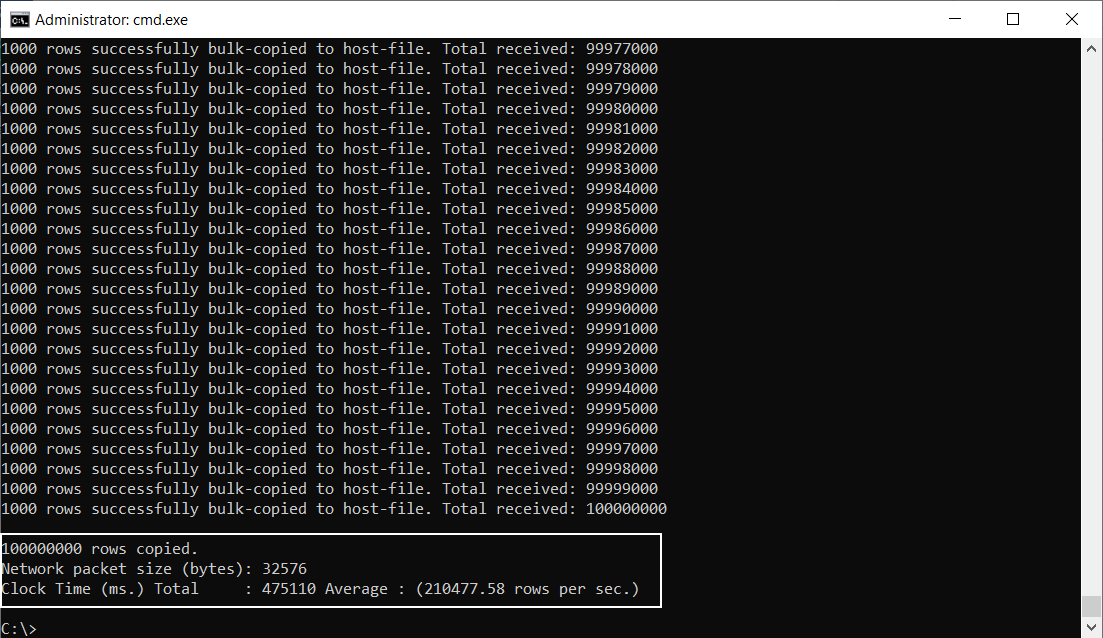 In general, performance bottlenecks are experienced related to BCP during the importing of external data into the SQL tables. Under the full recovery model, the first thing, we need to consider is the workload that will occur on the log file during the data importing operation because if we don’t determine any batch size for the data import operation, the whole operation will be done in a big single transaction. In this circumstance, all imported data will be fully written into the transaction log file of the database.

Before starting the first testing with BCP, we will take a look at the log file size of the database and then we will start the data import operation for 100 M rows. 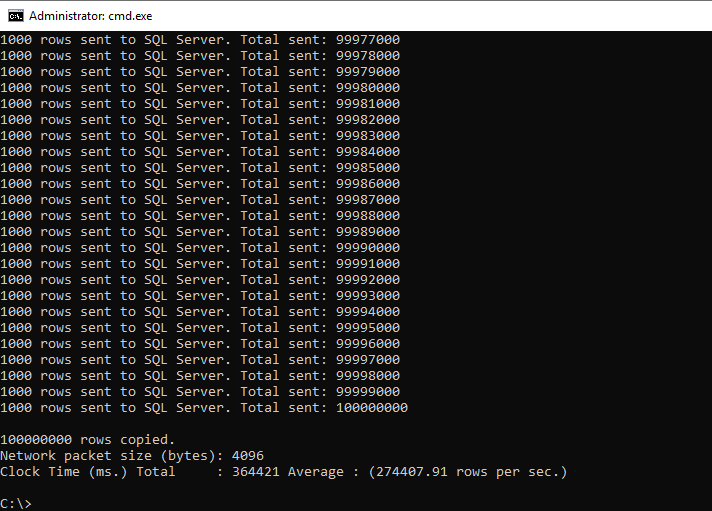 After the completion of the data import operation, the log file size has reached 27.144 megabytes. 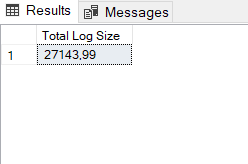 In addition to these conditions, we need to use the TABLOCK hint in the BCP command, and also the table must be empty if it includes a clustered index.

After changing the database recovery model to bulk-logged, we drop and re-create the target table and re-execute the following bcp command with the TABLOCK hint. 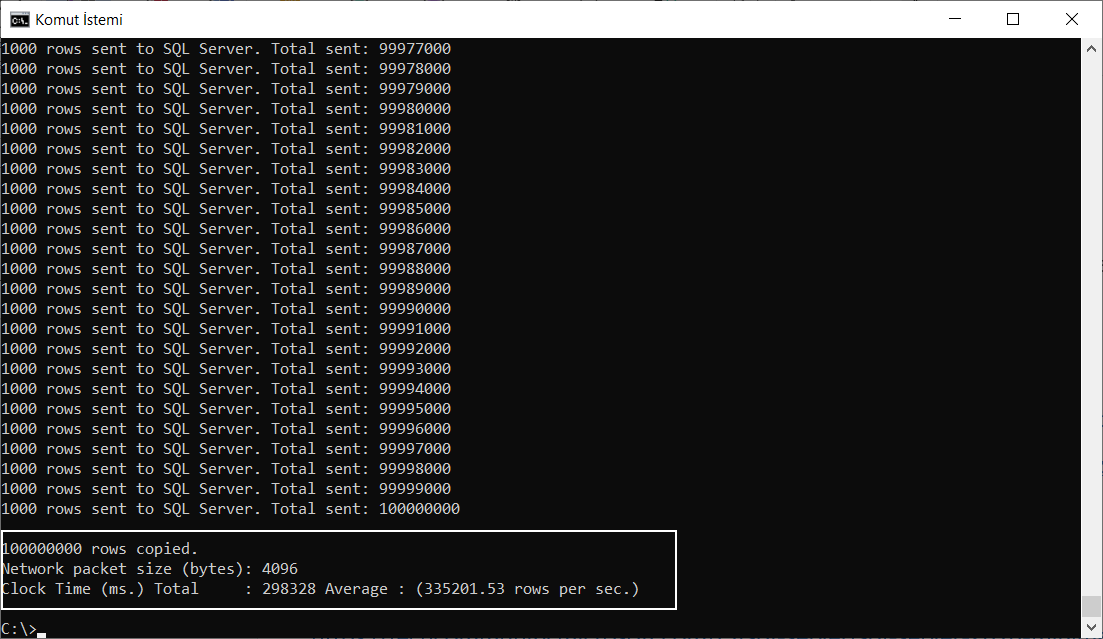 After the completion of the data import operation, the log file size has only reached 200 megabytes. 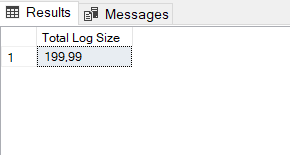 In this test, we have realized that SQL Server minimizes the log file activity and it increases the performance of the bulk copy operation.

Microsoft recommends using native data formats when the data will be transferred between two SQL Server instances for the identical tables if the table data does not contain any extended/double-byte character set (DBCS) characters. Thus, SQL Server avoids unnecessary conversion of data types to and from character format. To use native data format in BCP, we need to replace the –w parameter with the –n parameter. 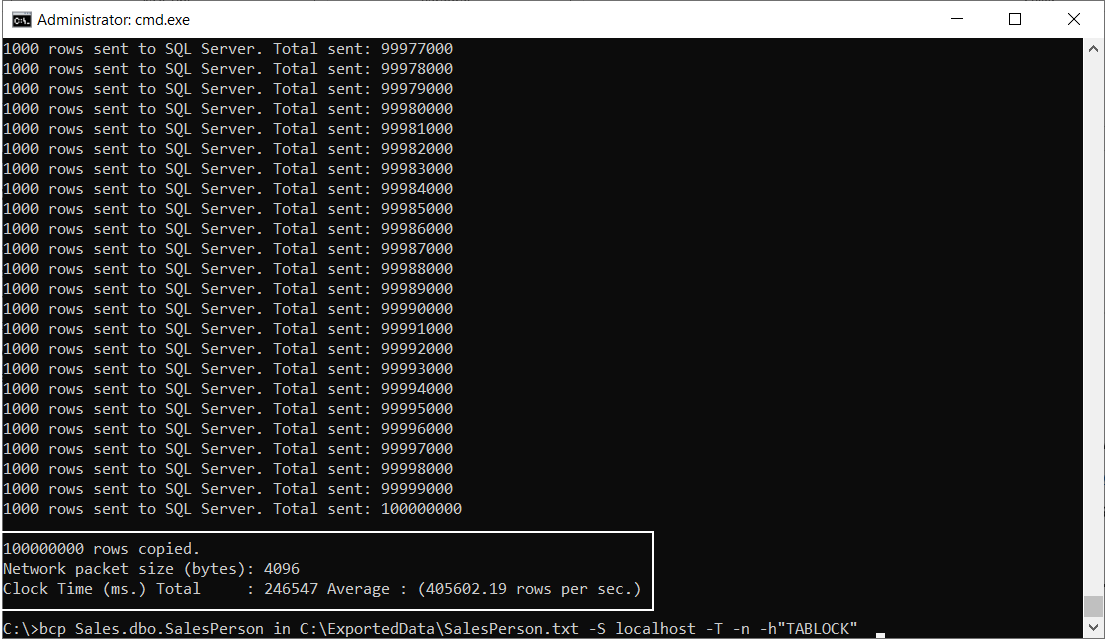 After using the native data format in BCP, the data import performance has boosted because the unnecessary data conversions are eliminated. 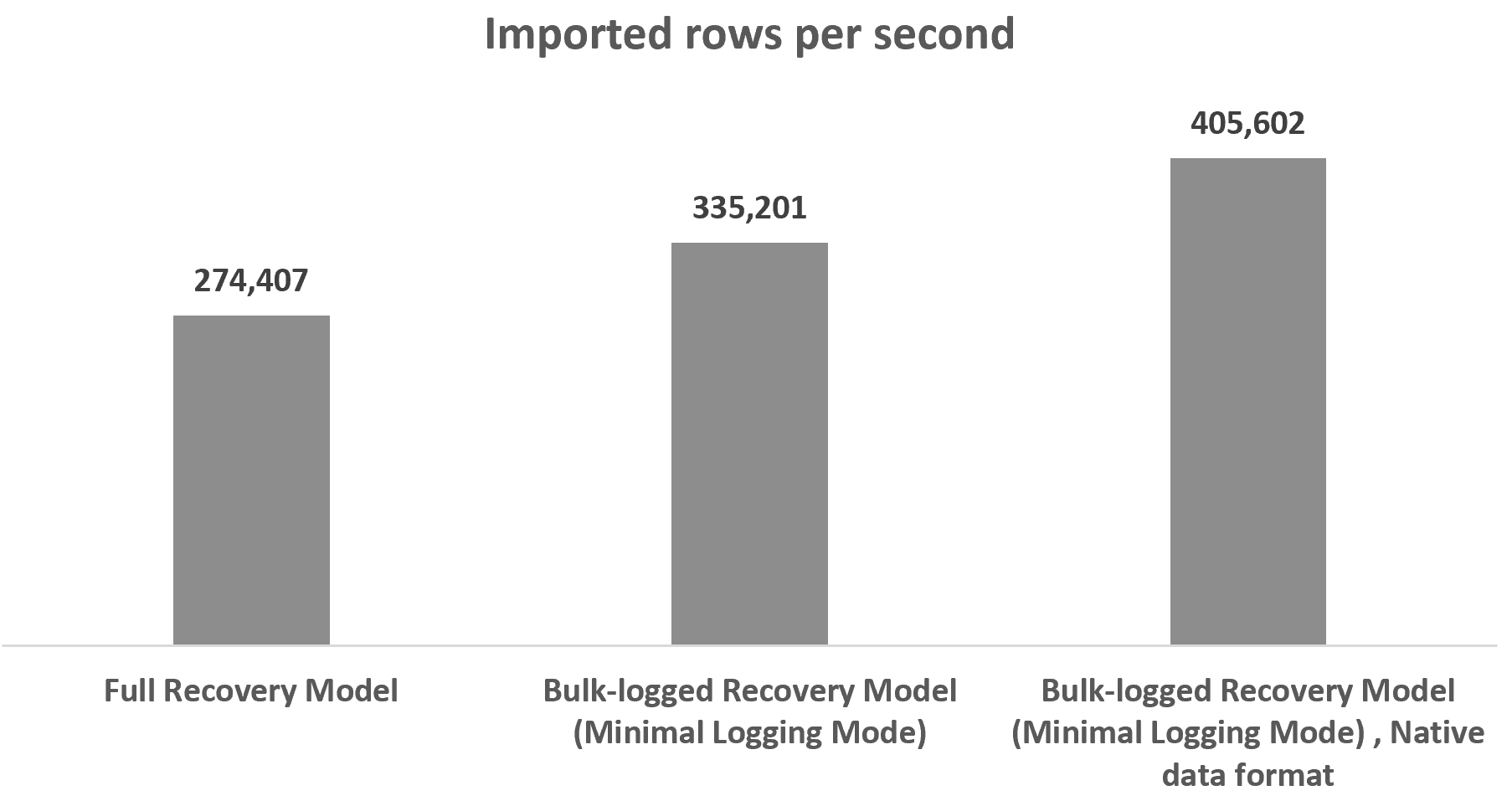