In this article, I’m going to discuss the different ways in which we can deploy SSAS cubes. SSAS or SQL Server Analysis Services is an enterprise-grade analytical data engine which helps business to create semantic models that can be used for reporting and making better decisions. The semantic layer created by SSAS can be accessed by client tools like Power BI, or Excel and reports can be prepared from thereon. SSAS comes with a few different versions, which are as follows.

First, it is important to know the different artifacts that are being generated while building as SSAS cube. If you see the figure below, you can see that there are four files. These files are generated when you build any SSAS project.

Let us now understand different methods by which we can deploy SSAS cubes. I’ll be explaining the following three methods in this article. 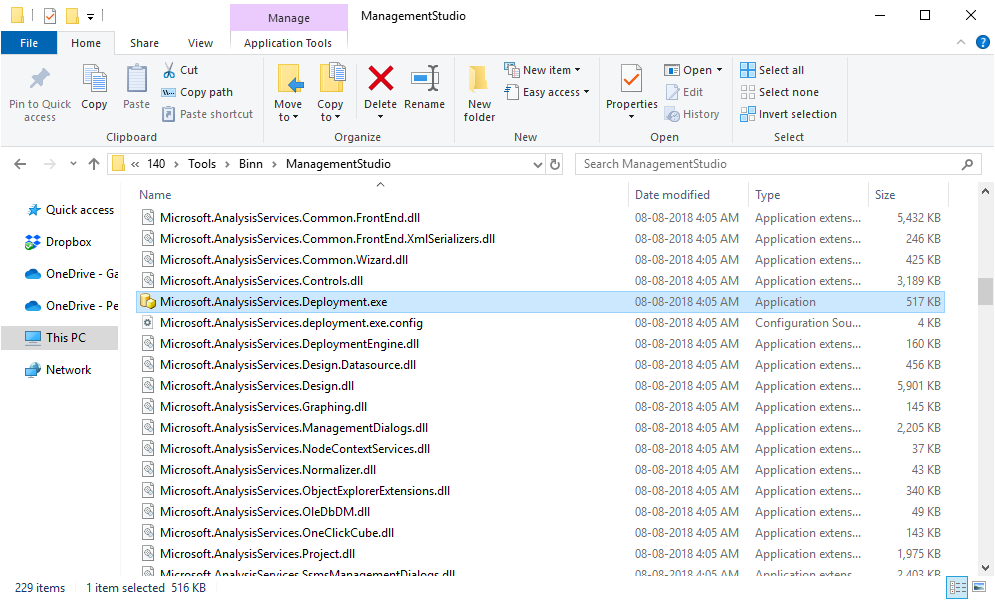 Once the wizard starts, you need to provide the path of the ASDATABSE file and proceed with the deployment process. 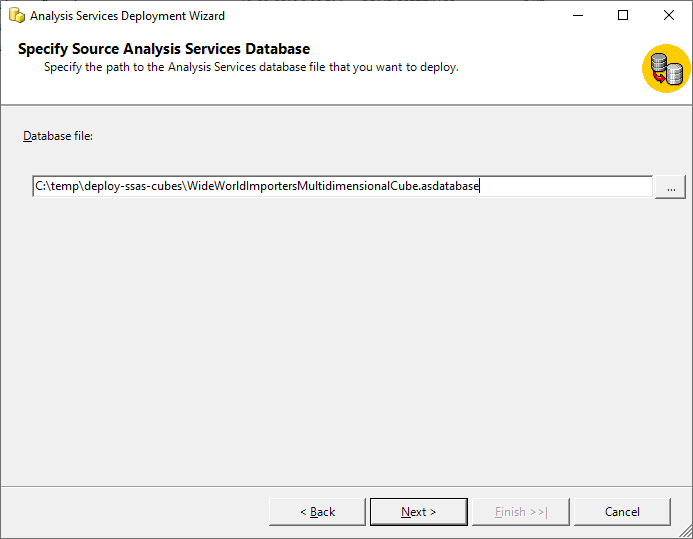 In the next screen, the details of the target server and instance must be provided on which we want to deploy the SSAS cubes. Since I’m deploying it on the default instance, there is no instance name mentioned after the server name. Also, we need to provide the name of the database on which the project must be deployed. By default, it takes the name of the SSAS project as the default database name. 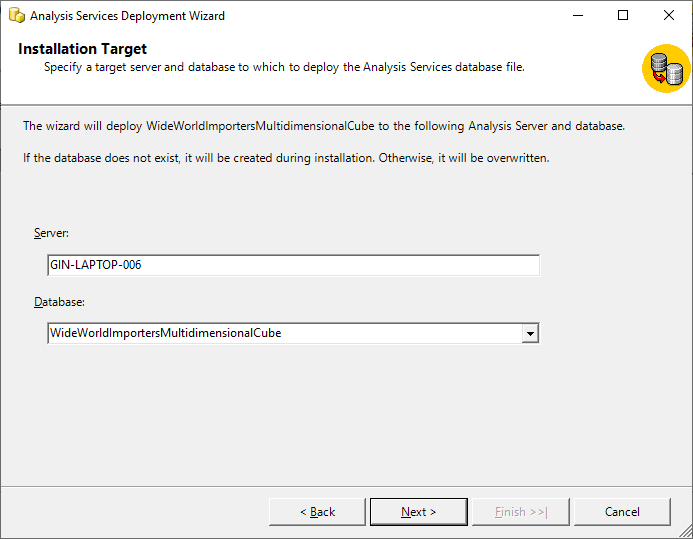 In the following screen, you need to define the options pertaining to Partitions and Roles and memberships. In an ideal deployment scenario, we use the options “Deploy Partitions. Any existing partitions will be replaced.” and “Deploy roles and retain members. Roles will be deployed along with their members for new roles. Members for existing roles will be retained.” 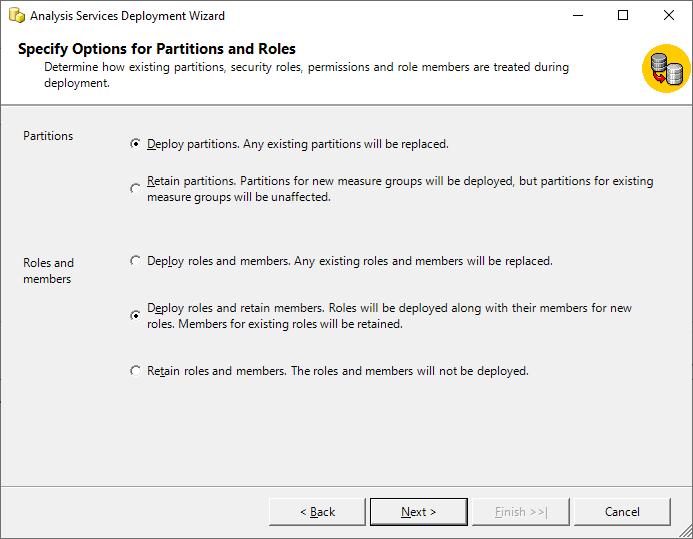 In the following screen, you need to define the Data Source Connection Strings to the source of the SSAS cubes. Click on the button with three dots and define the connection. Also, select an appropriate Data Source Impersonation Information that can be used by the SSAS cube while processing the cubes. 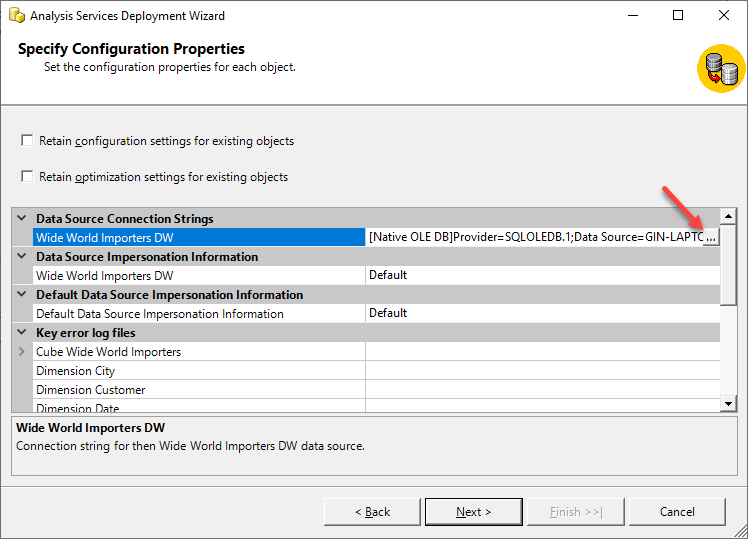 Finally, select the Processing Method as “Default Processing” and check the box for “Include all processing in a single transaction”. Hit Next and then Finish. The cube will be deployed and processed accordingly. 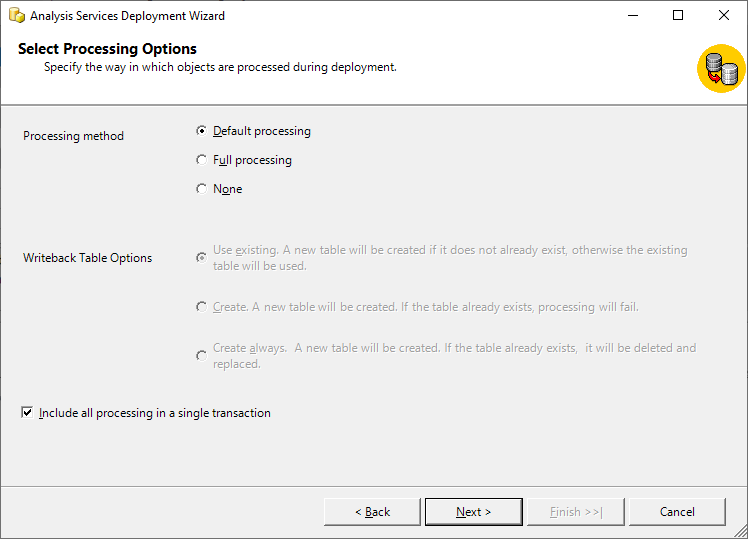 The SSAS cube will be deployed, and you can browse the cubes using SQL Server Management Studio.

Start with the Microsoft.AnalysisServices.Deployment.exe and provide the path of the ASDATABASE file. Additionally, add the parameters “/d” and “/o” to generate a deployment script in XMLA format. 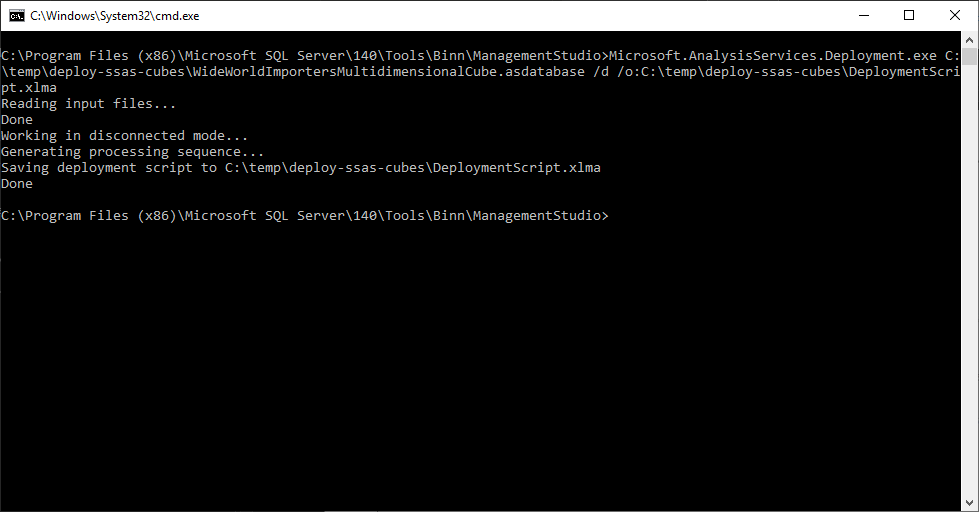 Once the deployment script is generated, you can open the script in SQL Server Management Studio and execute it against the target server. It will deploy the SSAS cube to the target server as required. 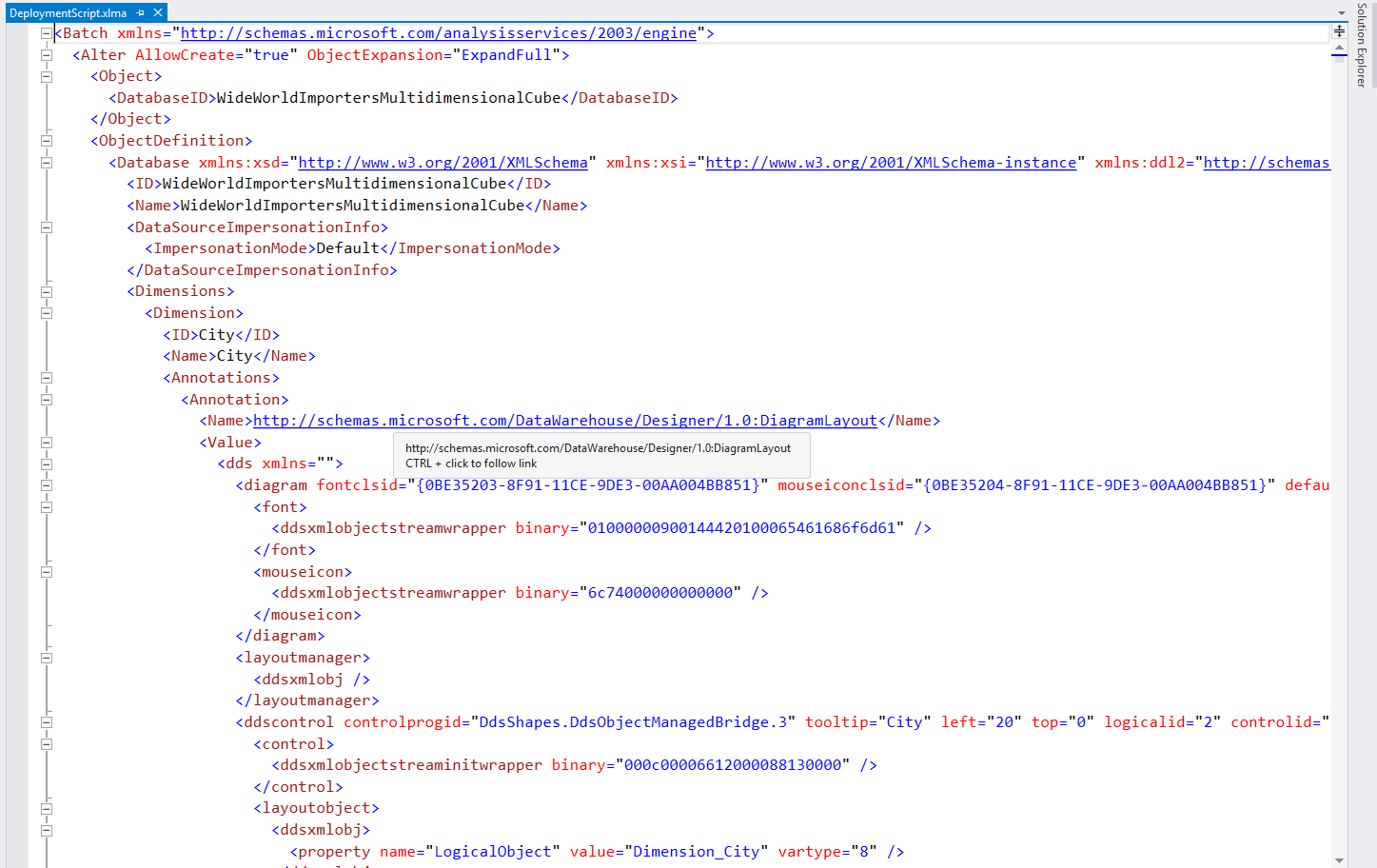 The Database Synchronization Wizard is another way to deploy SSAS cubes from one server to another directly. For example, this is useful when the SSAS cubes have already been tested in the test environment and are now ready to be deployed to the staging or production; we can leverage this method and deploy the SSAS cubes. The wizard compares the metadata between two instances of Analysis Services and then makes the target equivalent to that of the source by copying the metadata information from the source server to the target.

I have two instances of Analysis Services running – “SQLTEST01” and “SQLTEST02”. For this example, I’ll try to migrate the SSAS cube “WideWorldImportersMultidimensionalCube” from SQLTEST01 to SQLTEST02 using the Database Synchronization Wizard.

Right-click on the Databases under SQLTEST02 and select Synchronize. 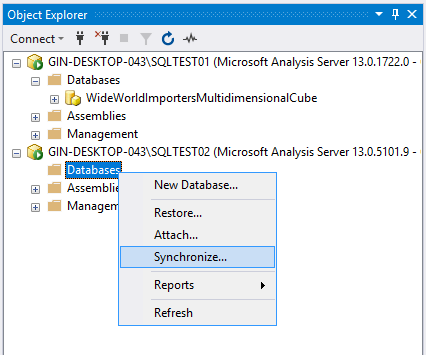 In the next screen that appears, select the Synchronization Source Server as the “SQLTEST01” instance and the Database as the “WideWorldImportersMultidimensionalCube”. Click Next once done. 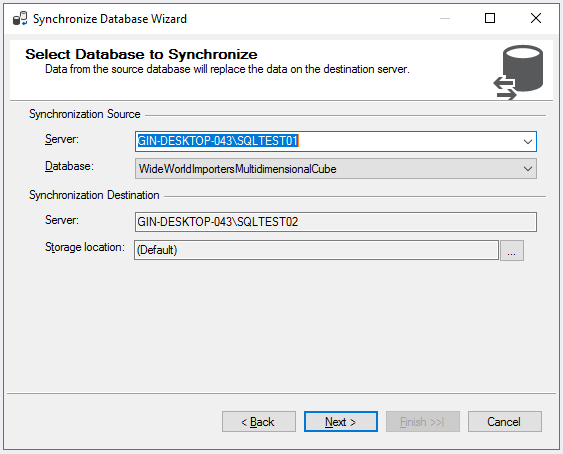 In the following screen, leave everything as default and click on Next. 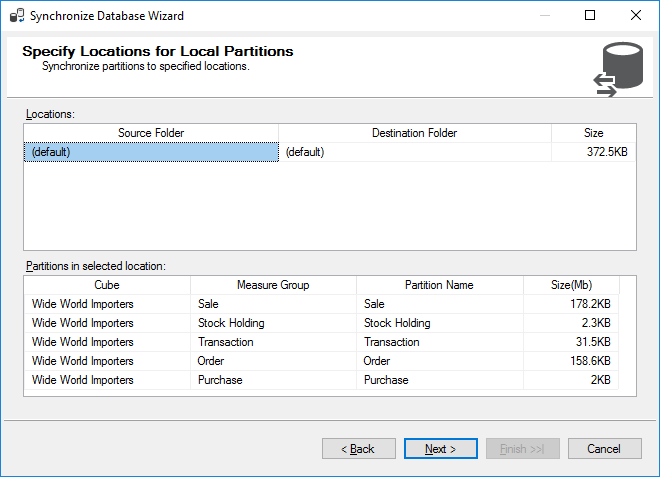 Finally, select the “Copy all” option for Security roles and members and click on Next. In the next screen, select Synchronize Now and click Finish. 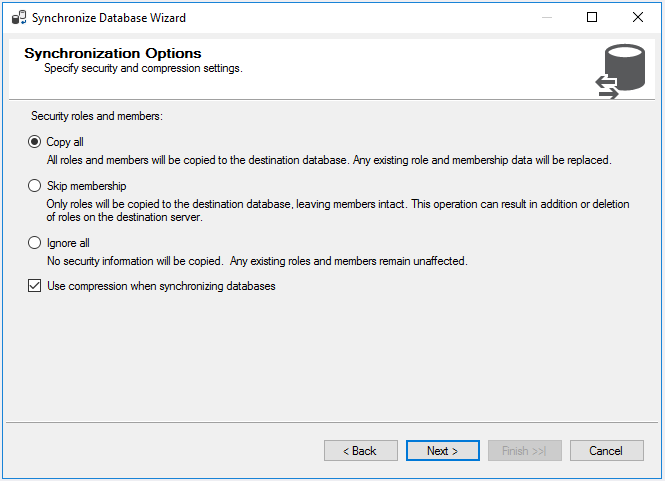 Depending on the size of the database, it might take a while to synchronize the databases. You can monitor the progress in the Database Synchronization Progress window. 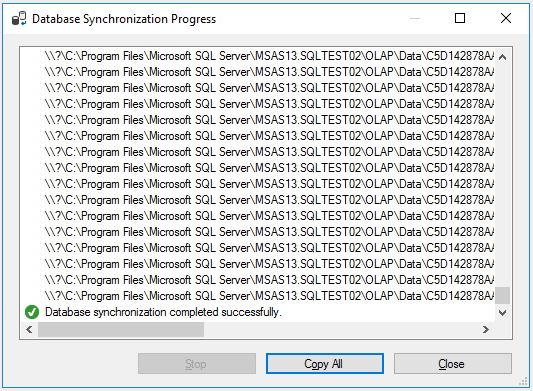 As you can see, now, the SSAS cube has been deployed to the SQLTEST02 instance as well. 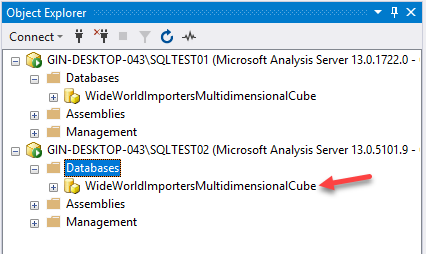 In this article, I have explained how to deploy SSAS cubes using three different methods. Although it depends on the environment that you’re trying to deploy the SSAS cubes, the most preferred way of deploying the cubes is by using Analysis Services Deployment Wizard as it has a GUI, which makes the task easier for a lot.