The value we give to each of these environments could be different, depending on multiple factors. For that reason, amongst other aspects, we won’t apply the same backups for each of these environments. For instance, the default strategy for production databases could be to take a FULL backup every night and a log backup every 3 hours. In contrast, we could decide that we won’t take backups at all for non-production environments except those related to development tasks. For these development databases, we could take a FULL backup once a week (but it should be more frequently).

Depending on the need for backup operations, we should adjust the Recovery Model option of each database so that we are able to only do the expected operations and there is no side effect with this setting. Let me explain.

In order to take a LOG backup for a given database, we need to define its recovery model either to FULL or BULK_LOGGED.

Let’s prove this assumption simply by taking a database called [testJEL] which is in SIMPLE recovery model: 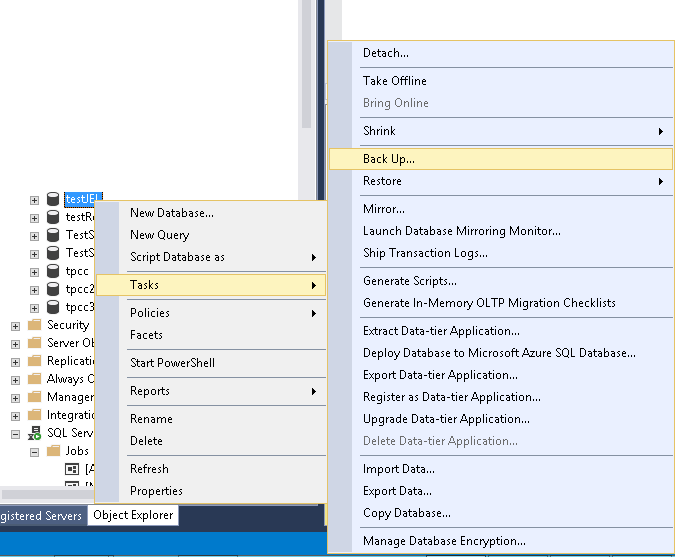 So, for environments where LOG backups are mandatory, we should ensure that databases are not in SIMPLE recovery model.

But that’s not all! What happens if there are databases set with FULL recovery model in an environment which is not backed up? It’s pretty easy to understand that, sooner or later, either the transaction log or file system hosting this transaction log will be full.

To prevent it from happening, we should ensure that every database in such an environment uses the SIMPLE recovery model.

This article will present a solution that monitors if the recovery model for each database on a given SQL Server instance is adequate with the backup policy defined for that server.

To do so, we will first define some pretty common software environments and the backup policy that should be applied. Once it’s done, we will define a (simple) way to keep track of current server’s environment. Then, we will discuss a stored procedure that we will use in order not only to detect abnormal database settings (regarding its recovery model) but also to correct them.

Here is a table with some common environments and an example backup policy.

In summary, with this kind of backup policy, only production environments should be using a recovery model different from SIMPLE.

How to keep track of server environment variables

In the most standardized environments, we might use different drive letters. For instance, we could use the D:\ drive for system databases, the P:\ drive for actual production ones and the E:\ drive for non-production data. But it’s not an absolute rule that everybody can use…

For that reason, we will keep it simple and store this information in a table, in a database dedicated to DBA tasks and tools. This table should help to answer two questions:

We will use a table called [Common].[ApplicationParams] that I already introduced in an article entitled How to report on SQL Server deadlock occurrences. As indicated by its name, it’s a table that holds parameters for applications. Here is its structure:

Its primary key is defined using [ApplicationName] and [ParamName] columns. You will find the code for this stored procedure in the Downloads section at the end of this article.

This table comes with a stored procedure called Common.getApplicationParam that will return the value for a given application parameter. The code to create this stored procedure will also be attached to this article.

Now we have a place to store the information, it’s time to define how this information will be stored. This, once again, will be pretty simple. We will actually define an application whose name is built based on two server properties which are:

So, the value for ApplicationName column will be defined using following query:

Storage of the information regarding software environment

The parameter corresponding to the software environment will be called “Environment”.

Now, we just need to insert a record in that table using following query template:

We will simply use the same pattern as above but the value for ParamName column will be called “SystemDatabases” and the value of ParamValue column will be a comma separated list containing at least following databases:

There is an important thing to notice about this solution: it highly depends on the contents of Common.ApplicationParams table. One could modify this value without notifying you about this… For that reason, consider adding triggers that disallow the changes to these parameters or that keep track of any modification in that table, or both of them!

Design of the checkup stored procedure

In this section, we will use the Common.ApplicationParams and its records discussed above. We will call this stored procedure [Administration].[CheckRecoveryModelToEnvAdequation]. It will be able to run in 3 modes:

Note: We could also add other checks, like checking all databases uses CHECKSUM page verification, which we did using a parameter called @WithPageVerifyCheck.

In summary, here is the interface for our stored procedure:

Its algorithm is pretty straight forwards:

You will find below part of the code for the operation 7.c:

The T-SQL code to create the [Administration].[CheckRecoveryModelToEnvAdequation] stored procedure can be found in the ZIP file attached at the end of this article.

Let’s run this stored procedure against a SQL Server instance which has one non-compliant database:

The [Administration].[CheckRecoveryModelToEnvAdequation] stored procedure won’t run without being called. We need a process that will call it regularly. To do so, we could create a PowerShell script that uses Invoke-SQLCmd commandlet and schedule it using Windows Tasks Scheduler… Or, we could create a SQL Server Job as SQL Server Agent is very handy!

Here is the procedure for the creation of a SQL Server Agent Job called “[Administration] Check Database Recovery Model”.

You’ll find all resources to implement this check on your SQL Server boxes using following link:


In order to install it, open scripts one by one following ascending numbering (from 01 to 06). Be aware that the sixth file requires manual intervention for you to define both server environment and databases that should be ignored.