A query goes through the following steps while it is processed by the database engine:

Query optimizer plays a key role in query processing and, its main purpose is to decide the most optimal query plan for the queries that wanted to execute. The optimizer estimates the resource consumption cost of the query plan candidates and it tries to choose the effective and cheap query plan in terms of I/O, memory, CPU, and time.

In the simplification phase, the query optimizer tries to transform queries into a more simple form by removing redundant and meaningless parts of the query. In this way, the queries can be executed faster using fewer resources.

In the simplification phase, query contractions can be detected by the query optimizer. Now, let’s explain the meaning of contradiction with a very simple example. At first, we enable the actual execution plan and execute the following query in the Adventureworks database.

When we analyze the query plan, we see only a constant scan operator because, during the execution of the query, the Product table isn’t read by the database engine because of the 1=0 expression. This expression is evaluated as a contradiction by the query optimizer so the query returned the only columns of the Product table. There is no doubt, 1=0 expression is completely meaningless so the data engine does not require reading any on the table because this expression result will always be false. The optimizer has a smart enough algorithm to find and remove some meaningless expressions in the queries and contraction detection works as part of this algorithm.

Check constraints are used to validate a column’s data against the specified constraint definition and the check constraints can be used by the optimizer. For example, the following query will not read any data from the Product table because the CK_Product_SafetyStockLevel constraint does not allow to exist any row which is the safety stock level is lower than zero in the Product table. So that the query optimizer knows that there are not any matched rows in the table with the filter predicate because of the check constraint definition. As a result, in the execution plan of the query, we see only a constant scan operator thus the optimizer makes saving the resources.

At first, we will drop the check constraint.

As a second step, we will re-create the check constraint with NOCHECK.

The sys.check_constraints table returns various information about the check constraints in the current database. When we look at the is_not_trusted column for the CK_Product_SafetyStockLevel constraint, we see that it has been marked as untrusted.

In this case, the query optimizer cannot trust the check constraint guidance and decided to read all records on the table to retrieve the qualified rows.

In some cases, trivial plans can cause to disable the contradiction detection feature of the optimizer. Let’s examine the following query plan. 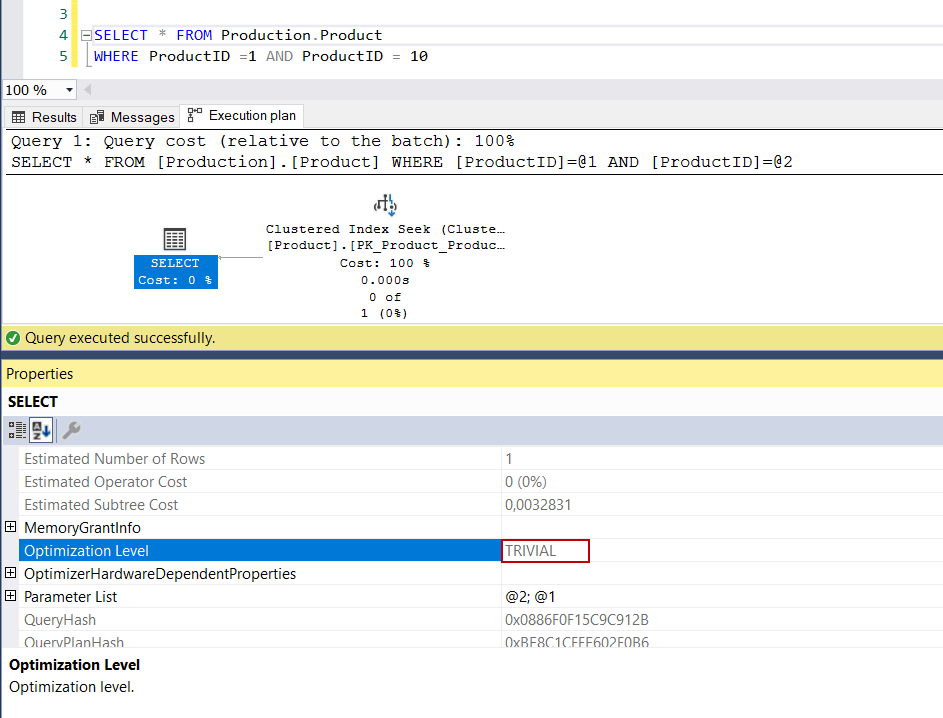 Optimization Level attribute indicates that the optimizer generates a trivial execution for this query due to the simplicity of the query. The trace flag 8757 can use to force the optimizer to generate a fully optimized query plan. Now we will apply this flag to the query and execute it. 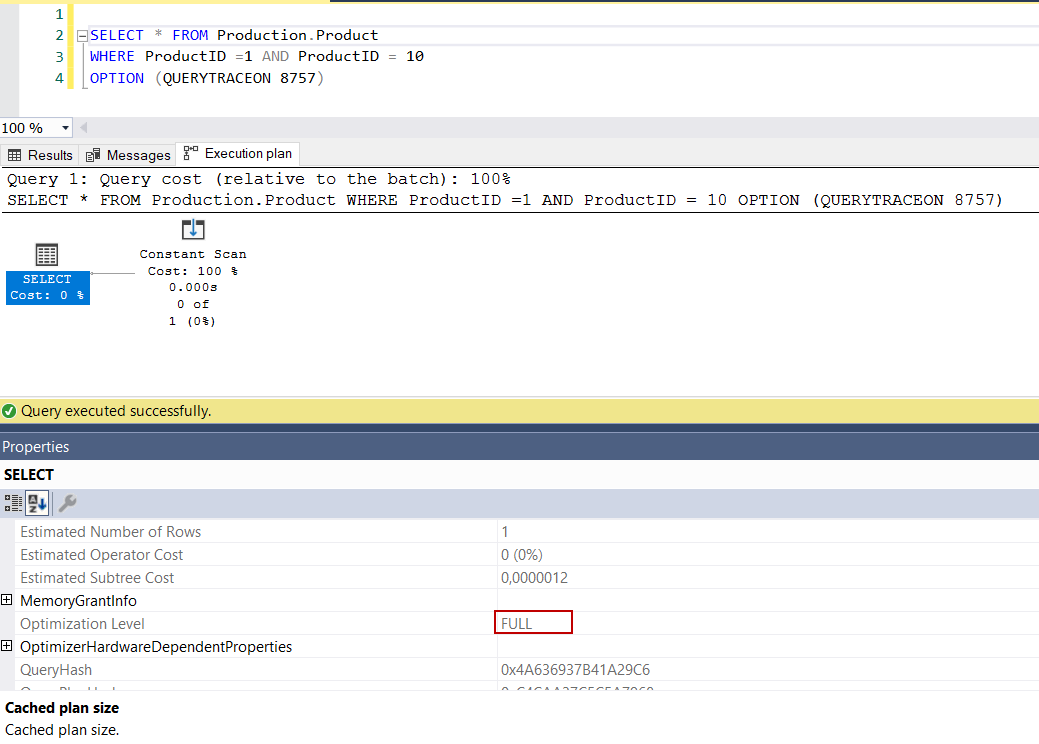 When all optimization steps are completed by the optimizer, the most effective query plan is found. In this way, the optimizer detects the contradiction in the query and decides that reading the Product table is redundant.

As we can see, in the query plan three different predicates have been reduced into a single seek.

Query optimizer estimates how many rows will be returned from a query and according to this information, it calculates the resource consumption of the queries. However, the query optimizer can use the row goal feature some particular keywords and behave differently than the usual:

When the query optimizer decided to apply the row goal feature to the execution plan, the estimated number of rows will be reduced, resulting in less resource usage. Such as, when we use the TOP (n) keyword in a query, we need only n number of rows in the table so the optimizer understands this requirement and generates a plan to consider this situation.

Let’s reinforce this interesting feature with a quite simple example. The following query will retrieve only 10 rows from the Product table. 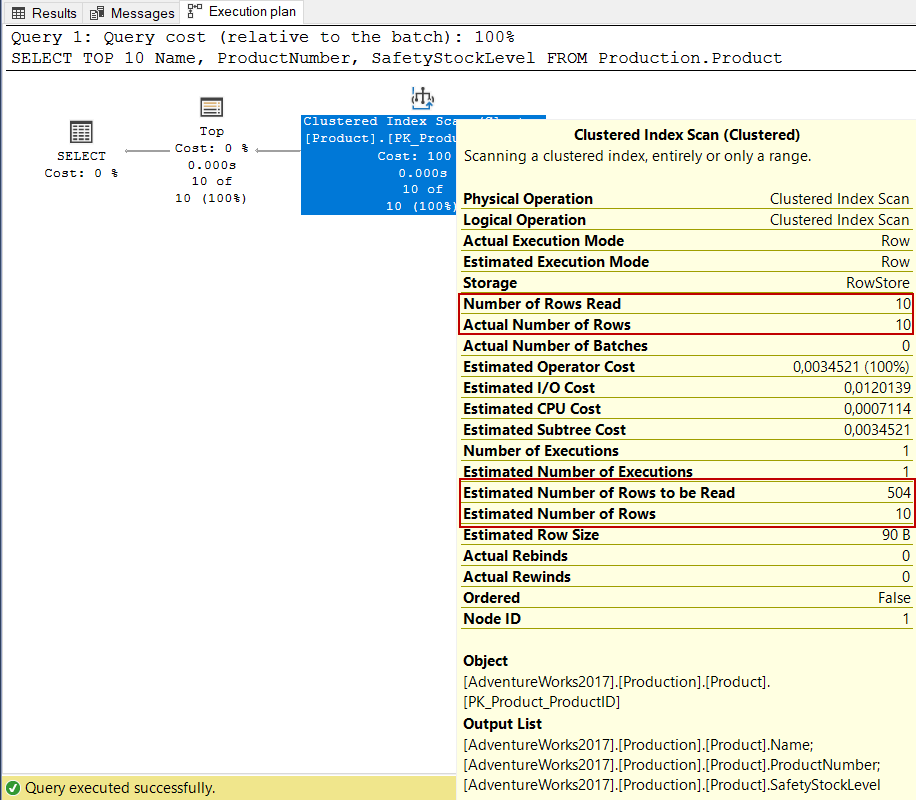 In this query, the optimizer considers the TOP keyword in the query and arrange the estimated row number according to this knowledge. In the execution plan of the query, the Estimated Number of Rows and Actual Number of Rows attribute values are equal. The EstimateRowsWithoutRowGoal plan attribute will be shown when the row goal is activated and it indicates how many rows will be estimated if the row goal is not used.

We can disable row goal with the DISABLE_OPTIMIZER_ROWGOAL hint. In the following query, we will use this hint and re-analyze the execution plan. 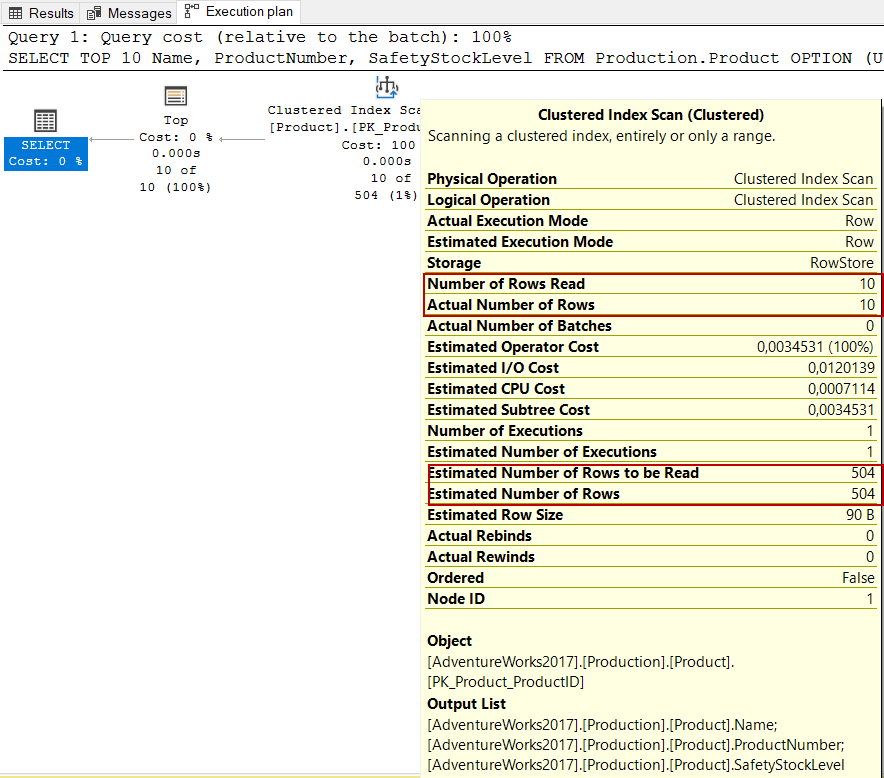 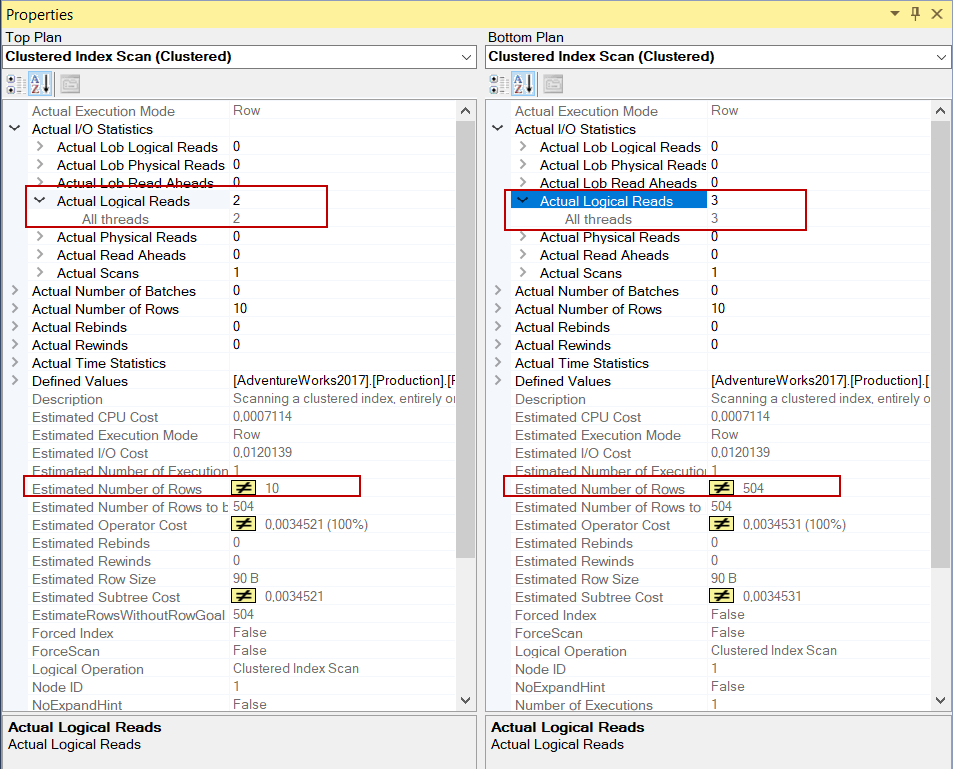