This article will discuss how SSAS Dimension Hierarchies can be used to analyze data much efficiently. If you are a data analyst, you want to start the analysis with a higher hierarchy. Then navigate the narrow attributes when required. For example, it will be better to start with analyzing revenue by year. If you need to analyze further into the data, you can choose the needed year and expand the Quarter -> Month, respectively. Let us see how we can create SSAS Dimension Hierarchies in OLAP Cubes to suit different requirements.

Before we start, it is important to note that we are creating hierarchies in a dimension, and a hierarchy can contain attributes of a single dimension only while an attribute can be a member of multiple hierarchies.

To demonstrate different types of SSAS dimension Hierarchies, let us create an SSAS OLAP cube using Fact Internet Sales in the AdventureworksDW database. Following is the Data Source View for the proposed OLAP cube. Please note that we have used user-friendly names for the tables. 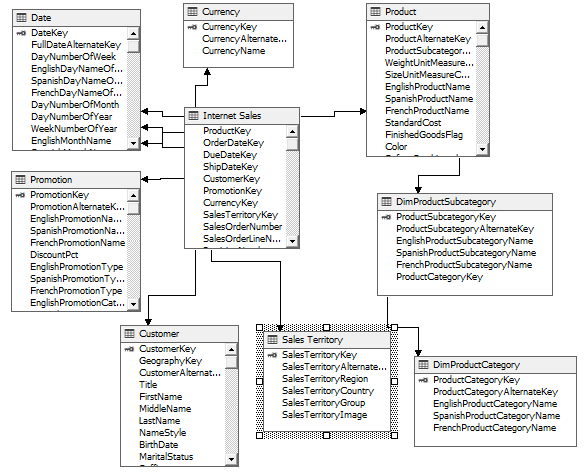 Let us create an OLAP cube and process it; The processed cube can be seen as shown in the below screenshot. 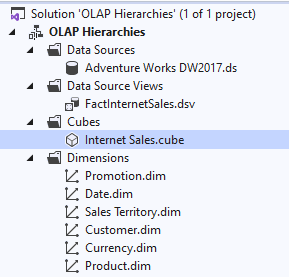 Let us analyze data using Excel just after creating the OLAP Cubes in Excel Pivot Table. Let us select Product Cost and Sales Amount and attributes from the Sales Territory, as shown below. 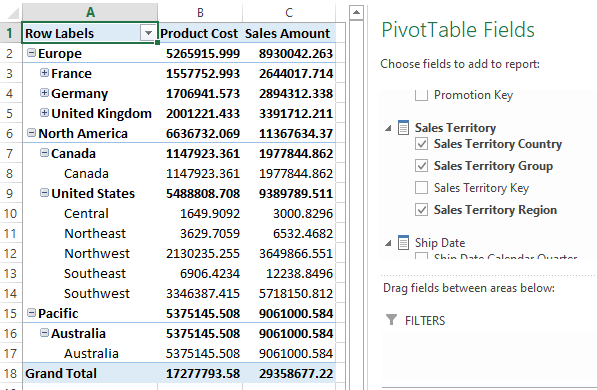 The following screenshot shows how hierarchies are created for the Sales Territories. 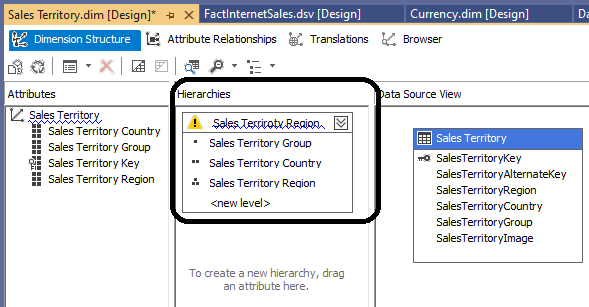 If you set the AttributeHierarchyVisible to False for the attribute property, this attribute can only be accessed through the hierarchies, not by the individual attributes. 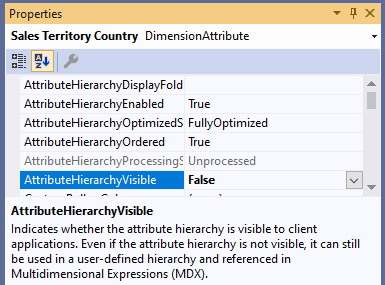 After creating the hierarchy and setting up the property, as shown in the above screenshot, you can process only the dimension.

Let us view this in Microsoft Excel Pivot tables, as shown below. 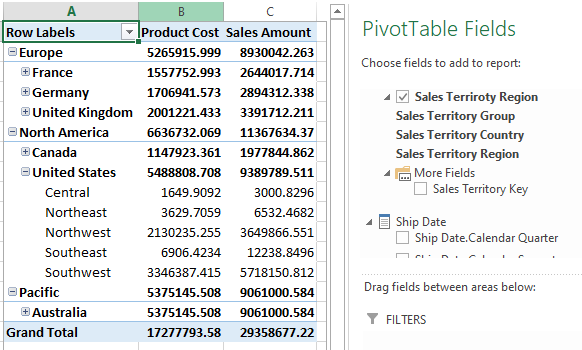 You can see that the hierarchy is available in the pivot table while the other attributes are not visible. 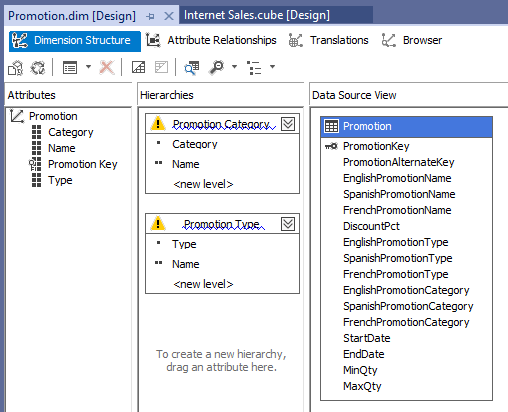 Let us create a hierarchy for the date dimension. In the above OLAP cube, the date is a role-playing dimension. A Role-playing dimension means depending on the surrogate keys that are joining with the fact table; you will have a different role for the dimension. In the above OLAP cube, the Date Dimension is linked to the fact table via OrderDateKey, ShipDateKey, and DueDateKey. For this configuration, there will be three dimensions named Order Date, Ship Date, and Due Date, as shown in the below screenshot. 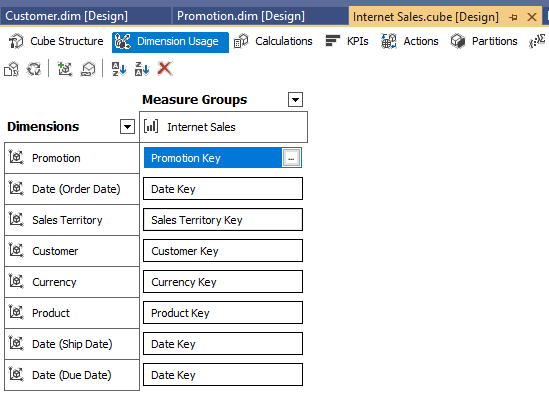 When you create a hierarchy for Date Dimension, that hierarchy will be available for all the other role-playing dimensions, as shown in the below excel pivot table. 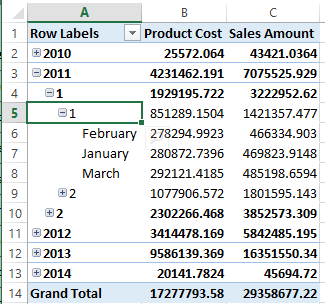 To achieve this, we need to do three configurations for the Month Name attribute, as shown in the below screenshot. 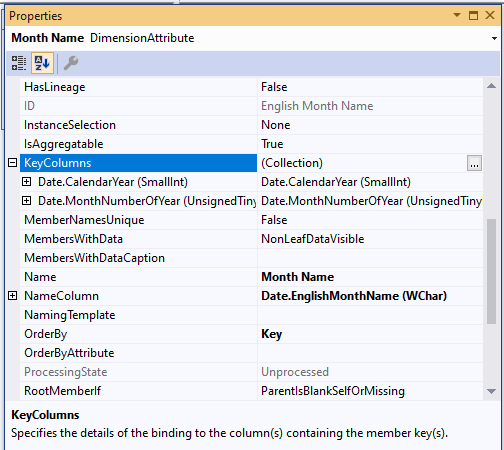 In this configuration, the key is changed to Calendar Year and Month Number of Year.

You need to change the NameColumn property to the EnglishMonthName.

After processing the date dimension, you will find that now the Month Name is in the order by the month number, not by the Month Name. 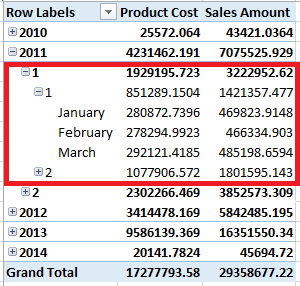 Let us assume that we want to analyze data with the annual income of the customers. As you know, since yearly income is a continuous variable, we need to create buckets or ranges for the yearly income. To achieve this, you can modify the DiscretizationMethod to EqualAreas, and you can define the number of buckets you need to create, as shown in the following screenshot.

Then you can combine this attribute with a different attribute such as Occupation to create SSAS Dimension Hierarchies, as shown in the below screenshot. 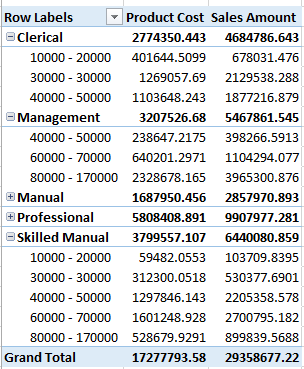 Let us create another Cube from FactResellerSales fact table with other related dimensions. In this cube, we are interested in the DimEmployee table. 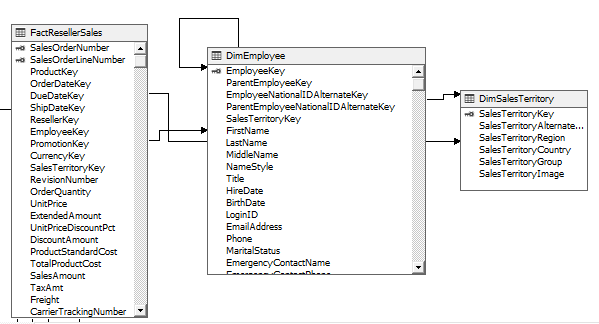 As you see in the above data source view, in the DimEmployee table, there is a self-referencing between EmployeeKey and ParentEmployeeKey columns.

We will add a new column in the data source view to accommodate the Full Name of the employee with the following expression.

This expression includes the First Name, Middle Name, Last Name, and the designation attributes of the Employee.

In the Employee dimension, select the Employee Key and change the name column to the Full Name that was created above.

This can be seen from the following screenshot.

For the Parent Employee Key, modify the Level Naming Template property, as shown in the below screenshot. 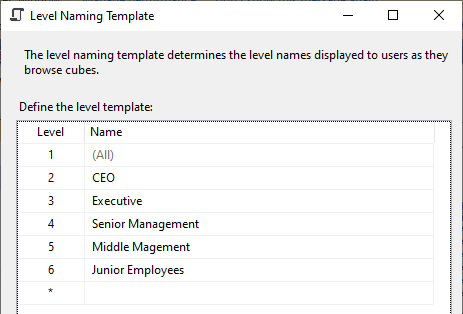 You are done with the Parent Employee Hierarchy and now process the dimension.

You can view any measure with the employee hierarchy, as shown in the below screenshot.