Even if you are a SQL veteran, actually especially if you are, you sometimes get really stuck doing something in the old way not realizing that in newer versions of SQL Server some handy functions have been added that can make your life easier.

In this article, I will mention a couple of these which appeared in SQL Server 2008 or later versions or might have even been there before but most people just didn’t know about.

In regular programming languages, such as VB or C#, you have long since been able to use the IIF statement. You are even able to use this in Excel. But in SQL you have always had to use IF ..ELSE or a CASE to perform a logical condition operation.

You can now use this in SQL Server. For example:

In this case the result will be as follows:

Ok so many of you may think this is not a big deal, you can already do string concatenation by using this syntax here.

But of course there is a bug here.

To get this to work you will have to perform an explicit conversion of the date such as:

What’s nice about the CONCAT function is that it does the implicit conversion. So you don’t have to convert or cast to a string before adding it.

The CONCAT function can concatenate up to 255 characters. Null is converted to empty string.

You have been able to use compound operators in other languages forever. Where you can just declare the parameter and increment or decrement by a number in a single command.

The following compound operators are available:

For ages you had to create one command for each row you wanted to insert unless you were using a SELECT INTO your command typically had to look something like this:

This has now been made somewhat easier, allowing you to not have to repeat the INSERT INTO portion of the command, but only specify the values you’d like to insert by using the Table Value Constructor. Such as this:

You can also specify a query as a value, but it has to return a scalar value such as this:

The table value constructor is limited to 1000 rows.

You also have the option to insert the same row multiple times by using the batch replicator option of the batch separator.

The batch separator is GO by default. The purpose of this command is to separate the code in a script into batches. Such as:

In this example, the USE Adventureworks2012 is the first batch and the INSERT command is the second batch.

So, now if you wanted to add the same row to the table multiple times you can specify a number of times that it should be executed such as:

In this case, the same row will be inserted 10 times. It may not seem very useful, but it is very handy if you have to generate large amounts of data for performance testing etc. Of course, your batch doesn’t need to be as simple as this example, you can modify it to insert data with different data types and derived values to create good quality sample data.

It’s worth noting that the batch separate is in actual fact NOT transact-SQL, it is a command which gets interpreted by sqlcmd, osql or SQL Server Management Studio.

When SQL Server Management Studio encounters a GO, it knows that it needs to send the preceding batch of code to the SQL Server instance. Using the replicator, simply tells the utility to send the batch multiple times.

SQL Server ships with a whole bunch of templates for common commands, which allows you to get the correct syntax to perform a certain task without having to google it. This is built into SQL Server Management Studio and can be viewed in the template explorer.

You can access the Template Explorer from the View Menu: 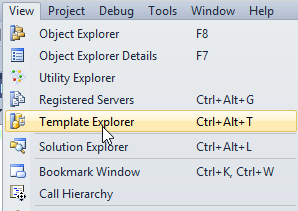 Which will open the template browser window, which displays all the available templates 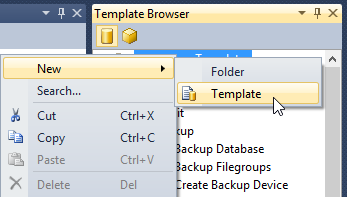 SQL Server has a myriad of tools and functions that most people are not aware of. These are just a couple of things I came across, but there are sure to be tons more. It is definitely worthwhile to sometimes just poke around and see what pops up that you haven’t seen before, especially for newer versions as SQL Server and the Transact-SQL language is ever improving.