No matter what your position, unless perhaps you work for the post office, typically you are required to do more to earn a promotion, not just do your job long longer. The trouble is that not everyone can or will do more. Some lack the motivation, some the potential and others endurance to continually progress. For whatever reason, even if there are growth slots available, not everyone will move up and instead some will ultimately hit their career ceiling aka plateau. This concept is often described at the Peter Principle

The Peter principle is a concept in management developed by Laurence J. Peter, which observes that people in a hierarchy tend to rise to their “level of incompetence”. In other words, an employee is promoted based on their success in previous jobs until they reach a level at which they are no longer competent, as skills in one job do not necessarily translate to another. The concept was elucidated in the 1969 book The Peter Principle by Peter and Raymond Hull. 1

But how can we deal with the Peter Principle without the ranks of “dead enders” growing in the company?

Stack ranks and other non-solutions

A few years back, stack ranking, as one solution to the Peter Principle problem, was all in vogue. The thinking is that each team must have members that fit on a typical bell curve and that you can simply prune the lowest ranking member(s) and keep the human resources ecosystem healthy and over-achieving. 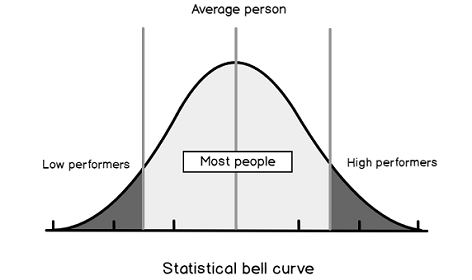 Problems with this approach, and particularly applying it to people just to be able to keep their jobs, are legion and, as such, already covered but some quick examples include:

As stack ranking has fallen out of favor, what are some other things that can be considered?

Not all separations are bad and not all retentions are good

As a young analyst at a Boston area investment firm, I was tasked with our VP to create an automated spreadsheet, that would determine raises for the company that year. The spreadsheet had to be based on a research study, with various calculations and formulas that took an interesting take on raises. The gist of it was to allocate an oversized percentage of raises to the over-achievers, which was supplied to the company via various inputs, to give a much smaller percentage to the average/marginal performers and to give the rest … nothing. At the time, and in this company in particular, it was a pretty radical concept, since most company would define a pretty narrow range of between 2 to 5%. Everyone got a raise, and there wasn’t much more for the best performer than from someone who was average, or even below average.

The research that we were using, though, indicated a few key things. Unless you over allocated raises to the high performers you would lose a good percentage of them. Good, simply wasn’t good enough for these movers and shakers. But it got more interesting. Money given to the low performers was not only wasted, it provided a disincentive for them to quit, which would mean the company would retain these underperformers, potentially forever, or they would have to be terminated, which can get very costly (severance, litigation etc).

The approach can be summarized as “You can’t ever pay your good team members too much, or your bad ones too little”

Not everyone can get promoted

Systems that force a promotion event, will preclude people simply existing in your organization structure, if the end result is “up” or “out”. 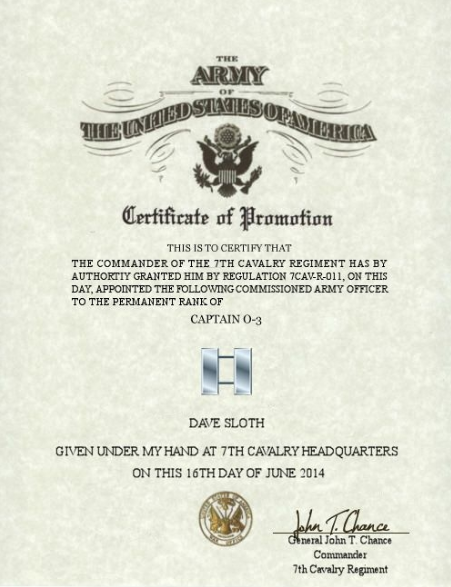 A few years later I received a strange looking, oversized package from the US Army. I was a commissioned officer in the US Army Reserve and had been either active in a reserve unit or in the inactive ready reserve, intermittently over the last several years. When I opened this packet I saw it was promotion material to Captain (from my current rank as 1st Lieutenant). Not actively assigned to a unit, working full time, kids, etc my military career in the Army reserves, wasn’t a high priority … so I pretty quickly through the entire packet away, without even responding.

A few years pass again and I get another packet, with the same results.

With each year, I heard less and less from the Army until suddenly I became the object of significant attention, with increasingly threatening letters, phone calls etc demanding that I contact some personnel office. This coincided with the need to staff up the war in Iraq. Just when I figured my gig was up and Uncle Sam was going to ship me overseas, I got one more letter from the Army. Opening it with dread, then confusion, I noticed it was my honorable discharge. 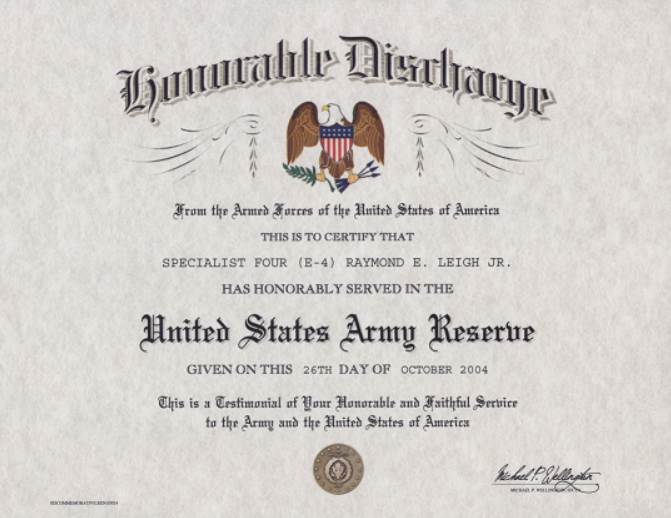 It was typical in the military for the left hand to not know what the right hand was doing, but this seemed particularly strange. Why was the Army working so hard to pull me back in and at the same time discharging me?

Armed with my discharge, I had the confidence to call my tormentors back and tell them that, unless the US re-instituted the draft, they’d be unlikely to ship me to a warzone, as I was a civilian (and not to mention would have been the world’s oldest platoon leader had they done so).

To be honest, I was so relieved that I quickly put the whole thing behind me without much thought. It was only years later that I began to dig into these circumstances. Why was I discharged? Even though I had no assigned unit and wasn’t actively drilling in the Reserves, I still had over 10 years of obligations (from scholarships and bonuses I had taken in exchange for service time I would be obligated to). Why was the Army going to just throw that away?

It turns out that, when you are passed over for promotion twice in the US military, you are automatically discharged. Those promotion packets that had found their way to the bottom of my trash can, had turned into my proverbial get out of jail cards. But why was the system set up like that?

It seems obvious, when I began to think about it. A Captain leads a company. In the infantry this is typically 250 or so people and 4 platoons. Each platoon is run by a Lieutenant, platoon leader. So only one Lieutenant can make it to Captain. 1 or 2 might drop out when their tour is done, but others might want to progress in their military career, but bolo out, as I did. For every for Captains, each running a company in a typical infantry battalion 2, there is a Lieutenant Colonel, who runs the battalion. So a captain has a 1 in 4 chance of ever becoming a Lt. Colonel. And so on and so on, up to 4-star general. There simply is no room in the organization hierarchy to promote more than a small percentage of potential candidates, let alone all of them

This simple but effective process illustrates the typical promotion trajectory of personnel. Everyone has a time-limit to achieve a promotion, but if they fail on successive occasions, they are terminated. This is the “up” or “out” approach 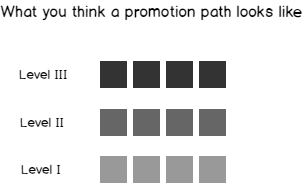 Retention is one of the least understood facets of human resources. We get recruiting and hiring (or at least we should), we get promotions. We get firing and even layoffs. But retention is sort of the taboo subject of many companies, especially if a positive retention outcome is a necessary and planned separation. But team members themselves are the ones most likely to misunderstand the goals and objectives of retention in a company

One problem is that many people cling to outdated notions from bygone eras where you were essentially employed for life e.g. IBM in the 60’s. Even though, logically, we understand that this economy no longer exists anymore (at least in the US) we still cling to these fanciful notions of lifelong employment and security, especially if we get too firmly ensconced in a comfort zone. These notions cloud our ability to understand the competitive nature for continued development in any organization and convince us that we don’t need to continually improve, in some cases just to retain our job/position, let alone get promoted.

Fallacy #1 – Everyone is good and has the potential to succeed, they just need to be managed properly

Unfortunately, the real world isn’t Lake Wobegon, and not everyone is “above average”. People’s performance, potential and results generally sit quite neatly on a typical bell curve. So unless your company can accommodate people who perform below the mean level of performance you most likely have people in your organization who won’t be successful

Fallacy #2 – It is HR’s job to find perfect employees and once recruited, it is assumed, by definition that they have the potential for success

It would be nice, but HR is an incredibly imperfect science and there will be hits and unfortunately some misses. Even the best HR department can hire people who don’t have the potential and/or inclination to succeed in an organization.

Fallacy #3 – Because I’m good at my current level, it means that, by default, I’ll be good at the next level.

Most careers have a built in cap, that unless we adjust with continuous learning and skills development, will eventually cap out career growth. You may progress through various levels until you hit your ceiling but hit it you will, if you don’t work to push that ceiling up. And meeting the requirements at one level, does not entitle or guarantee you to move to the next. You might be an excellent Level I, an average Level II but not ever be qualified to be a Level III. In such an example, your effective ceiling is Level II. Unless you invest to move your upper career parameter higher by training, growth, professional improvement, that is likely the peak level of your career.

No, a company has three main responsibilities, in order to recruit and retain staff effectively

You do only have n years’ experience if that experience built on itself by learning and growing, otherwise you simply have 1 year repeated n times.

Most employees look at their job as an opportunity for advancement and growth and only see it from that perspective. But keep in mind that your organization is also looking at you, in turn, with the expectation that you will continue to improve and make a bigger impact and contribution each year. Don’t underestimate the increased expectations your employer will have for you, even if you are doing the same job. Failing to do so, could lead to a scenario where you may have outstayed your welcome in a particular position, Peter Principled, or missed an opportunity to position yourself for advancement.

Instead proactively understand your company’s/manager’s expectations, and then meet, or ideally exceed them. Hopefully, your employer will recognize your efforts and contributions and validate your progress, thus ensuring a retention success, for both sides of the equation

View all posts by Brian Lockwood