Introduced on SQL Server 2014, the new brand feature In-Memory OLTP a.k.a “Hekaton” is a Main-Memory Database Engine. Developed by Microsoft Research & Paul Larson (Database Research Group at MSFT) this feature have the ability to manage and held tables entirely In-Memory. In this Series we will pass through for all the new concepts and components that makes this New Engine the most excited acquisition of the new SQL Server Version (120).

Constructed to break myths in the DBMS (Database Management Systems) Hekaton (Hekatonkheires) is a mythological creature with “Hundred Hands and Fifty Heads” and the reason for Microsoft gives his name is because they want to achieve midway 10x-100x of performance, for clarification 10x faster, means that the engine must execute 90% fewer instructions, going further, 100x faster means that SQL Server needs to executes 99% fewer instructions which means a drastic code reduction.

The databases systems were designed assuming that the Main Memory (RAM) is expensive and data needs to reside on disk. But now this assumption is no longer valid. The scenario changed over these years, and now in the 21st century the hardware became cheap and the price of the memory is still decreasing. Today is possible to store an entirely database In-Memory, even if the size of the database is greater than 1TB (Terabyte), the reason underneath this, is the x64 architecture that allows a maximum memory of 8 TB in the Windows Server Operate Systems (SO). Traditional Disks are measured in Ms (Microseconds) when the Main-Memory (RAM) is measured in Ns (Nanoseconds), what makes the Main-Memory more attractive and fast for the data access layer perspective. 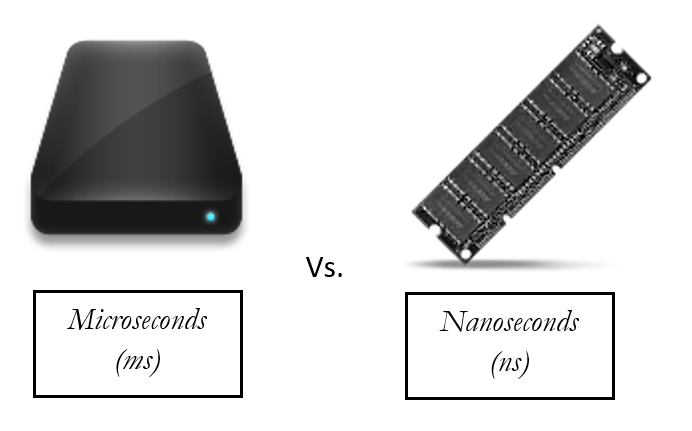 Like was mentioned before this is a new feature that was built-in the SQLOS (SQL Server Operate System) layer totally optimized to work with the tables entirely In-Memory. In this Series you will understand all the topics bellow and how they work making this the main pillars of this new technology that spent more than 4 year to be developed. 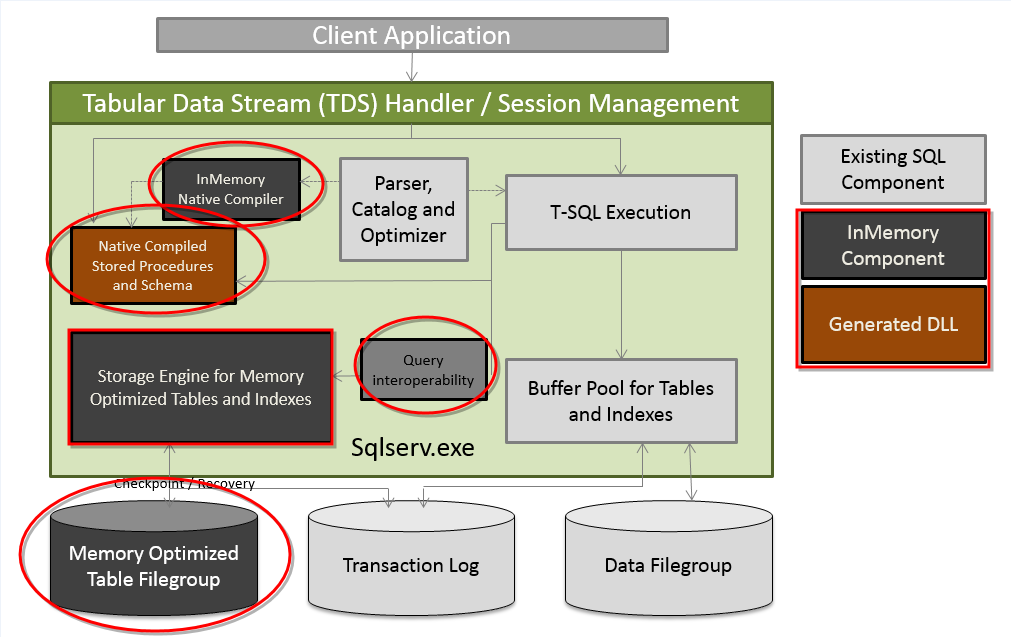 The highlighted places are the components that were added in the engine and I will describe shortly how they work.

Figure 3. In-Memory Tables and Stored Procedures loaded into memory on the server

The checkpoint operation consist in a background task that look to the previous transaction log that wasn’t been covered by the checkpoint process and convert this in a memory-optimized section. Once this process finished the checkpoint is completed logging this in the Data and Delta pair files.

This files gave the possibility to break an obstacle in the database systems, all the data access becomes sequential. We will get into more details of this files and the Merge Operation in the next series posts. The files are stored in the MEMORY_OPTIMIZED_DATA that was created previously.

There are a few barriers and concepts that we need to understand, but implementing this new feature will change your scenario and vision for this new capability, and now that you have a glimpse of how this new feature can makes you go beyond in your scenario, follow this new series that will contain more than 11 articles and becomes a pro. We will dig all the necessary parts for you implement this feature and have gains never obtained before. See you next week.

Luan Moreno credits his ability to solve problems to thinking critically before acting. He values working with a team because he and his clients can benefit from various perspectives and collaboration, particularly when faced with difficult issues.

When Luan Moreno first became interested in technology, he didn’t have a mentor, so he made a commitment to teaching others in the community and sharing his knowledge through blogging, speaking engagements

View all posts by Luan Moreno