In this article, we are going to learn Azure Cosmos DB. This article is a part of the series Learn NoSQL in Azure, where we will explore all the different types of non-relational databases that are supported in Azure at the moment. Azure is one of the most popular public cloud platforms that has a big market share all over the world. Cosmos DB is a part of the Databases section in Azure that allows customers to create and use NoSQL or non-relational databases and consume these at scale. You can leverage Cosmos DB to build highly scalable and robust cloud-based applications that support modern big data workloads. Let us understand more about what a NoSQL database is all about and how it is different from a relational database. Although this article focuses on the NoSQL related to Azure, it is to be known that other open-source projects support NoSQL databases like Apache Cassandra, etc. However, these topics are out of the scope of this article and we will focus on Azure mostly.

Why do we need a NoSQL Database?

However, relational databases were based on relationships, and distributing these databases across multiple systems gets very costly, as these relationships had to be maintained across all the nodes within the cluster. These databases are originally architected to run on single servers in order to maintain the integrity of the databases. This meant that relational databases can be scaled vertically but preferably not horizontally. Vertical scaling could be done by increasing the resources available on the server, but it was limited, unlike horizontal scaling. These limitations gave rise to the evolution of the NoSQL databases as these could be scaled both vertically and horizontally without having to worry about keeping relationships intact.

As you can see in Figure 1, on the left we have two relational tables – “Orders” and “OrderDetails”. And on the right, we have a JSON document that relates to the structure from the tables. This JSON document is known as a single document in a Document Database. The detailed data from the OrderDetails have been incorporated within the same Orders in a nested form. This is a denormalized form of the data and helps in faster reads as compared to reading data from multiple tables. Here, in a NoSQL database, the data is stored in the form of documents, which means we are going to have one single document for each order. In this way, as the orders increase, they can be distributed to multiple nodes and scaled out accordingly. Notice that since the detailed data are nested within the same document, there is no need to maintain complex relationships within the two entities.

Azure Cosmos DB to the rescue

Now that you have some idea about what NoSQL databases are, let us look into the major NoSQL database provider available in Azure. As per the definition of Wikipedia, “Azure Cosmos DB is Microsoft’s proprietary globally-distributed, multi-model database service for managing data at planet-scale launched in May 2017. It is schema-agnostic, horizontally scalable and generally classified as a NoSQL database.”. CosmosDB was launched by Microsoft in the year 2017 as a multi-model database system. We will look into the multiple database models available within Azure Cosmos DB in the latter part of this article.

Cosmos DB is an entirely managed service by Azure, meaning that customers are not required to worry about any sort of infrastructure before using it. They just need to have an active Azure subscription in order to get started with Azure Cosmos DB. It has rich features like global distribution and multi-master replication modes that enable data to be stored in multiple locations within the region. Additionally, Cosmos DB also supports some sort of analytical workloads and Artificial Intelligence based on the data that exists on the databases.

Now that we have some idea about Cosmos DB, let us understand the underlying structure of the components within it. 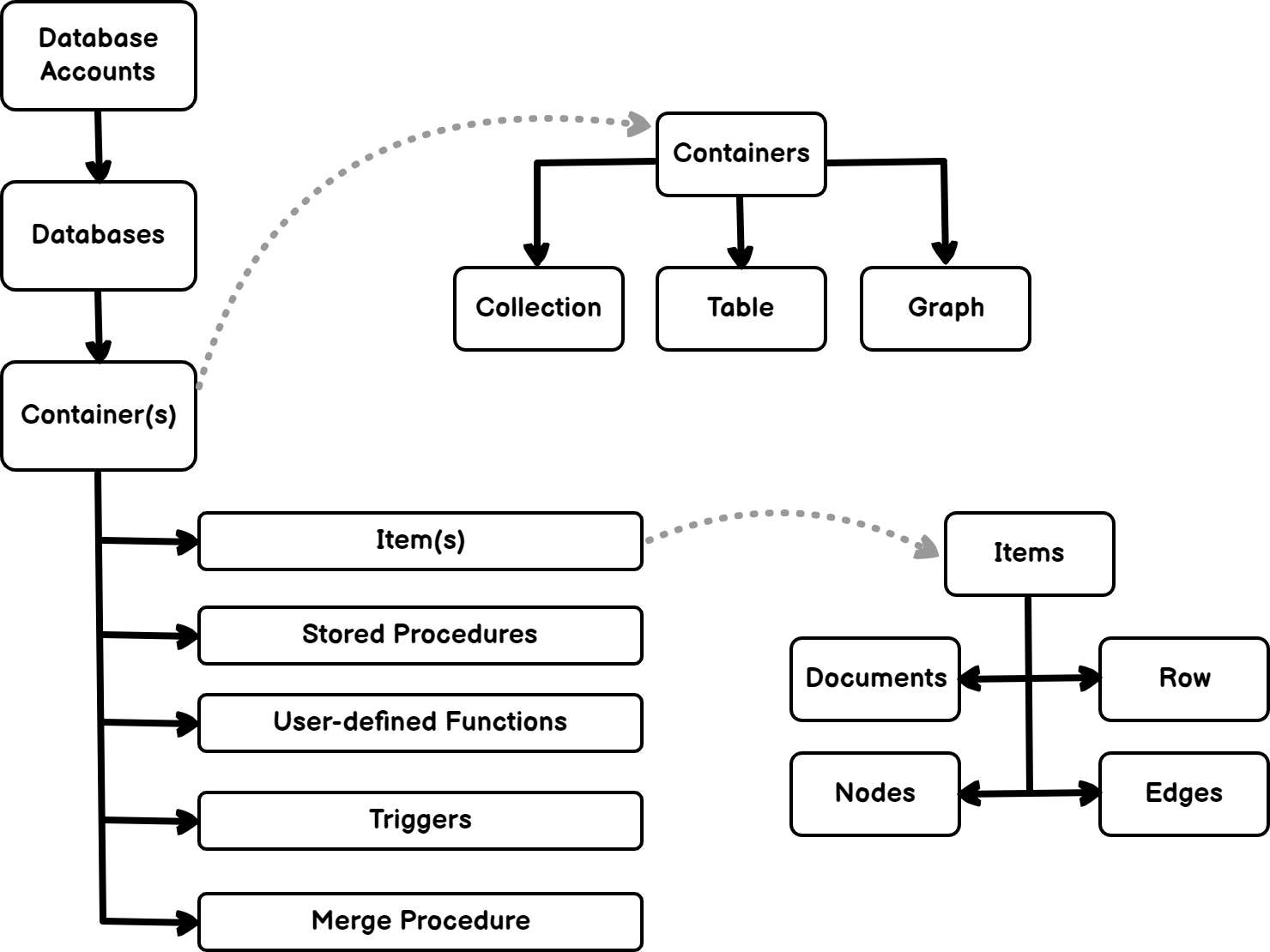 As you can see in the figure above, the top-level item is the Database Accounts. Within a Database Account, there can be one or more databases. Each of the databases is comprised of something known as containers. Azure Cosmos DB offers multiple APIs for a NoSQL database and depending on the API, the containers can be of different types like a collection, a table or a graph, etc. However, irrespective of the container API, there is a set of features that each collection has. These are items within the collection, stored procedures, user-defined functions, triggers, merge procedures, conflicts, etc. Again, items vary depending on the database API that is being used. The following table shows the association between the database API, collections and item types.

In this section, I am going to highlight some of the key features of Cosmos DB.

To learn more about Azure Cosmos DB, you can start by reading the official documentation.