JSON (Java Script Object Notation) is a lightweight text-based data format that helps to interchange data easily between modern applications. At the same time, JSON is used by the NoSQL (Microsoft Azure Cosmos DB, CouchDB, etc.) databases to store the unstructured data. The small data size is the main feature of the JSON and this property enables to an interchange of the data easily between the applications. At the same time, JSON offers the following advantages:

At the same time, a JSON object can contain two different data structures:

As we mentioned in the previous section, JSON is used widely by the applications. In this context, the conversion of the JSON data into the relational format is becoming more important.

OPENJSON is a table-valued function that helps to parse JSON in SQL Server and it returns the data values and types of the JSON text in a table format. Now, we will look at the syntax of this function.

The jsonExpression is an input parameter that specifies the JSON text that will be parsed by the OPENJSON function.

The jsonPath is an optional parameter and it is used to seek a specified JSON expression in the JSON text and the OPENJSON function parses only this part of the JSON text.

The WITH clause is an optional parameter that can be used to explicitly specifies the schema.

In the following example, we can see a very simple usage of the OPENJSON function. It will parse JSON in SQL Server and return the parsed JSON in the default schema format.

In this result set, we can observe that the OPENJSON function is executed with the default schema and it has returned three columns:

The returning columns of the JSON result set can be defined by the users. In this usage method, we need to specify output columns and their types and then we can pass this user-defined schema to OPENJSON through WITH keyword.

We need to use AS JSON keyword to specify JSON objects or arrays which are contained in the JSON text. In addition, the column data type must be NVARCHAR(MAX).

How to parse the JSON arrays with OPENJSON?

JSON arrays are used to store multiple key values. The JSON arrays are specified with square brackets ([ ]) in the JSON text and values are separated with a comma. When we parse a JSON text which includes an array through OPENJSON, the result set will look like as below.

In another way, we can use the jsonPath parameter to covert the JSON array into a relational format.

In the strict mode, if the specified JSON path expression does not find in the JSON text it returns an error.

How to parse a JSON file with OPENJSON?

OPENROWSET function is used to read data from files from the file system. The below query will read the JSON file contents in the specified file path. 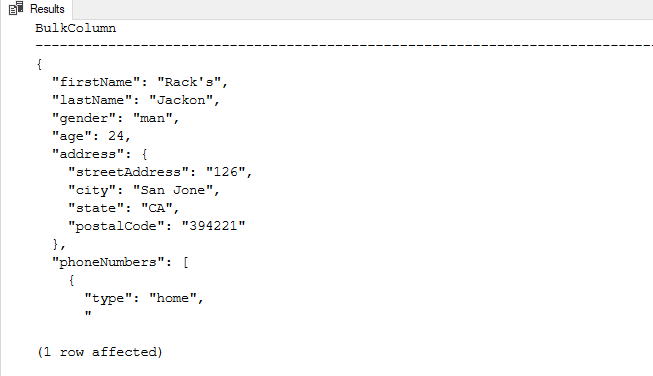 Now, we will convert the JSON data to the relational format with the help of the OPENJSON function.

How to call JSON API in SQL Server?

The JSON API enables us to communicate between two application platforms in the JSON data format. These API’s results are returns in the JSON format and accept the data that’s formatted as JSON. Such as, this JSON API returns weather data information for London. 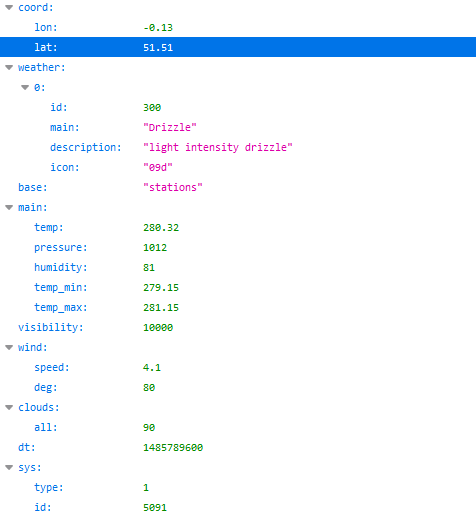 The following query will get weather information result from the HTTP server and then convert the JSON text into the table.

Now, we will explain the above query line by line.

As a first step, we declared the required variables and create an instance of the WinHTTP object with the help of the sp_OACreate procedure.

In this part of the query sp_OAMethod procedure opened an HTTP connection and sent an HTTP request to the server. ResponseText method retrieved the response of the web server as a text. As a last, the sp_OADestroy procedure destroyed the created instance of the object.

In the final part of the query, we used the OPENJSON function to parse the returned JSON text. The city name is stored in the name attribute so we defined a schema to obtain this value. The second schema parsed the weather array and got the description value from this array.

In this article, we explored the JSON notion and learned the data structure of this object. We also explored parse JSON in SQL Server through the OPENJSON function. JSON is used by modern applications to exchange data and store unstructured data. On the other hand, relational databases are an indispensable part of our software development life cycle. .JSON is not an alternative for the relational database model but it has a schema-less data structure that makes it more flexible to store unstructured data and combining this data model to relational data called a hybrid data model. All these features help in storing and processing both relational and JSON data by using T-SQL and this hybrid model opens a gate of the new data age.