In this article, we will explore JSON_QUERY() functions in SQL Server to extract JSON objects and array from the JSON Data.

JavaScript Object Notation (JSON) is an accessible format for representing data in a structured way. It consists of lightweight data for data exchange. If you are familiar with Amazon Web Service, DynamoDB, MongoDB, Couchbase databases, you should be familiar with the JSON documents. These NoSQL databases primarily uses JSON structured data. It becomes necessary for SQL database administrators as well to understand JSON and use SQL Server function in conjunction with JSON.

Before we go further, I will give a small overview of JSON object and array.

We can view these functions in the following image of Microsoft docs. 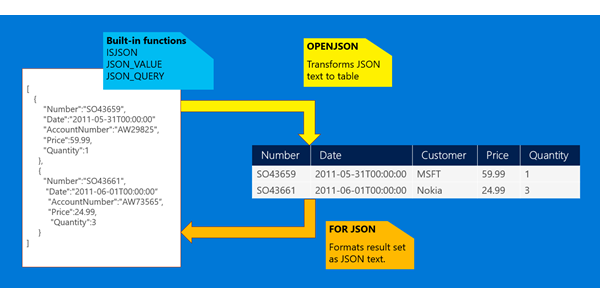 We explored JSON_VALUE() and JSON_MODIFY() functions in my previous articles. You can refer to JSON for these articles. In this article, we are exploring JSON_QUERY() function using various examples.

Example 1: Get the JSON object from a JSON string

In this example, we require to retrieve the first JSON object from the [employees] key.

It retrieves the first JSON object and gives you the following output.

We can retrieve the whole JSON document by removing the second argument. It is an optional argument, so we do not get any error. We can also use the ‘$’ argument to get the whole JSON string.

You can see the whole document as part of the JSON_QUERY() function.

As you know, we cannot use the JSON_VALUE() function to retrieve an object or array. It retrieves a scalar value from a JSON string. You get NULL value in the output if we replace the JSON_MODIFY() function with JSON_VALUE().

It returns a NULL value in the output, as shown below.

It also gives you NULL value in the output If we try to get a scalar value from the JSON_QUERY() function.

By default, JSON_QUERY() function uses a default path mode lax. In this mode, SQL Server does not raise an error in case of any invalid key or value. We might want to raise an error message instead of getting a NULL value in the output. We can use strict mode for getting the error message.

Example 3: Retrieve JSON by the $ symbol using the JSON_QUERY() function

In the following example, we have a JSON string that contains key-value pairs, a JSON array and JSON object.

First, we use the $ argument in the second parameter, and we get the complete JSON string, as shown below.

In the output, we can also notice the message – 1 row affected. It treats the entire JSON string as a single row in SQL Server.

In the output, we get the employees array without the key. We can note that the array starts and end with a square bracket.

Further to this example, we need to retrieve the second row (JSON object]. As we already know, JSON uses a zero-based indexing process, and we can specify the second argument $.Employees[1].

We can further filter the JSON and get the customer’s address JSON object. Here, we can specify further argument as $.Employees[1].Address.

We can use the JSON_Query() function in the AdventureWorks sample database. For this demo, you can use the below steps to prepare the same database.

At this step, we can use the JSON function to query data in the AdventureWorks2016_EXT sample database.

We can use SQL functions such as SQL CONCAT in combination with JSON_QUERY functions. You can download WideWorldImporters database.

We can use FOR JSON PATH argument to format the output in the JSON format. It also allows you to provide a root element in the JSON string. In the below query, we use the root as Items.

You can click on the JSON hyperlink and it gives you JSON as shown below.

You can copy the JSON and paste it in the JSON formatter. It gives you the following formatted JSON. 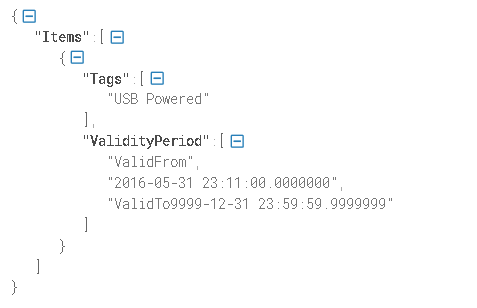 In this article, we explored JSON_QUERY() function to retrieve the JSON object and array from JSON data. It is a useful function to work with SQL Server JSON data. You should explore these functions and be familiar with the Javascript object Notation.