In the article, we will learn how to use the ‘iotop’ and ‘iostat’ commands with various configuration options.

It is essential for SQL Server DBAs to learn important commands in Linux in order to troubleshoot any performance issues in a Linux environment. When we encounter any performance issues or need to check the system or user processes, we can use the ‘top’ command. The ‘top’ command gives basic information about the CPU and memory processes. We might require more details in order to troubleshoot the issue, though. In such cases, we can utilize information similar to that in Windows provided by the task manager, resource monitor, and performance monitor.

In Windows systems, we look at the resource monitor to get information about the individual process and their disk related activity (Reads\sec, writes\sec). 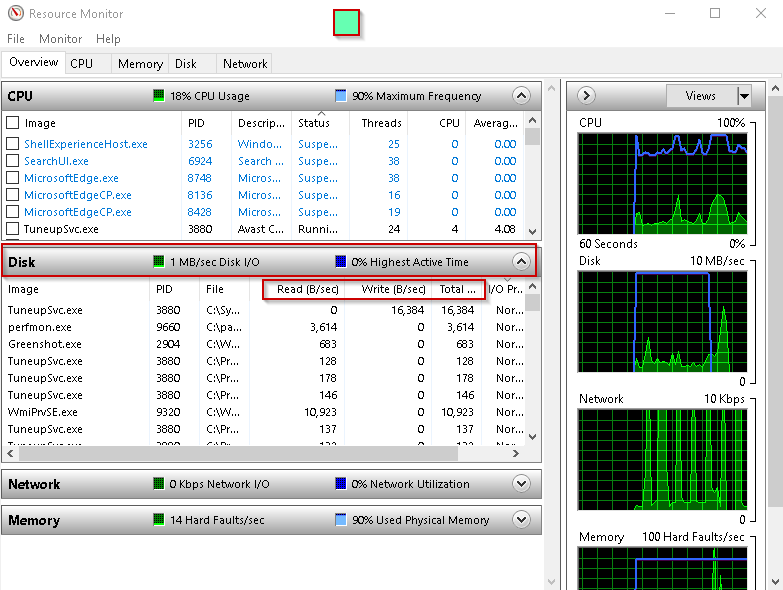 We can get further information using the performance monitor, where we can configure multiple parameters to get disk related activity.

A few important counters in performance monitor are:

Let us explore some commands in Linux to get the disk related information.

We can monitor IO statistics for all disks and file system in Linux using ‘iostat’ command. This command is not installed by default, so we need to install this.

Therefore, install the ‘iostat’ using the below command in the terminal window. 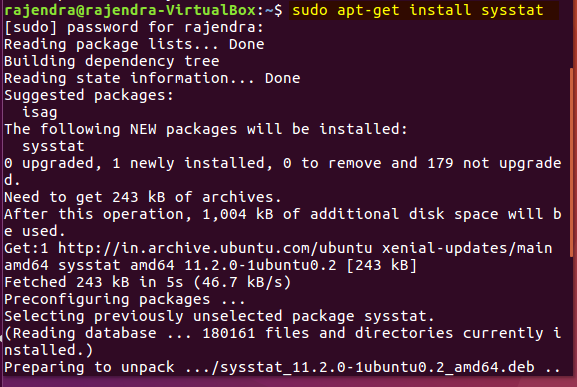 We can view the processes or task it performs to install the ‘iostat’ command. 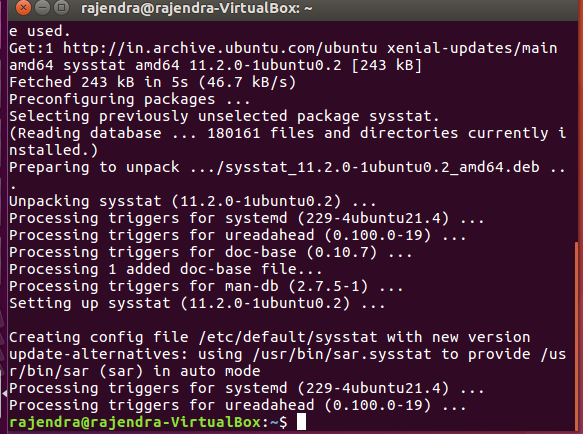 We can now run the ‘iostat’ command and view the output.

In the output, we can categorize the information as below.

From the output, we can see below information:

Below is the columns output we get for the individual disk device.

If we want to get only device-related information, run the below command:

By default, it command gives basic information about the disks. If we want to get detailed information, run the command with ‘-x’ parameter.

We get additional columns in the output as compared to the previous run without ‘-x’ parameter.

We can get the stats in KB or MB with the below commands:

We can get the stats with a time interval as well. This helps to get the report.

Using below command, we can run ‘iostat’ with MB unit in 3 seconds interval and 4 times. 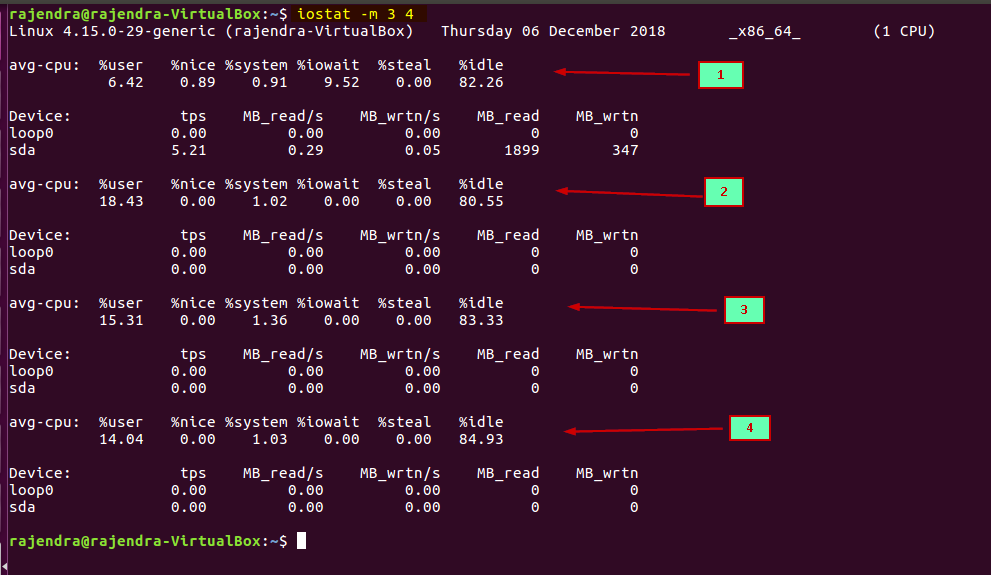 We can get IO information or disk utilization by the individual process. We also need to install this command to use it.

In Ubuntu, run the below command to install ‘iotop’:

I highlighted the important information during the installation of ‘iotop’. We need to run this using administrative permission else, below error message is logged.

We can see below column header for the ‘iotop’ command. In this output:

We can get information about the iotop command using the ‘sudo iotop –help’ command. 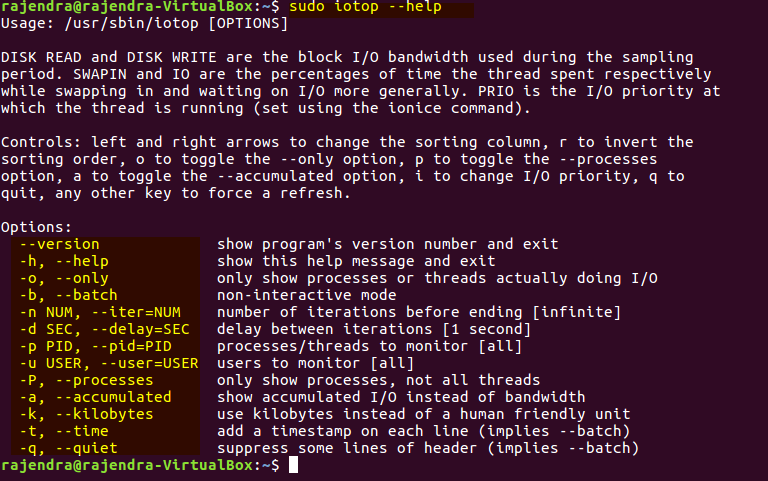 So let us explore these options.

If we want to check current running processes, we can run the command ‘sudo iotop –only’

‘iotop’ command also gives output in interactive mode. We can change the sort column using the left and right arrow keys. You can notice the same in below screenshots.

In below screenshot, the current sort column is ‘USER’. 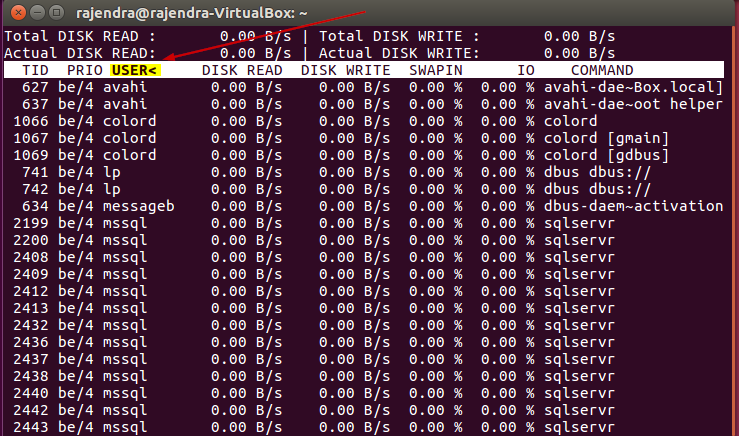 Press the right arrow key few times and we can change the sort key to ‘command’ as shown here:

In the running out, press ‘p’ to only show the processes. 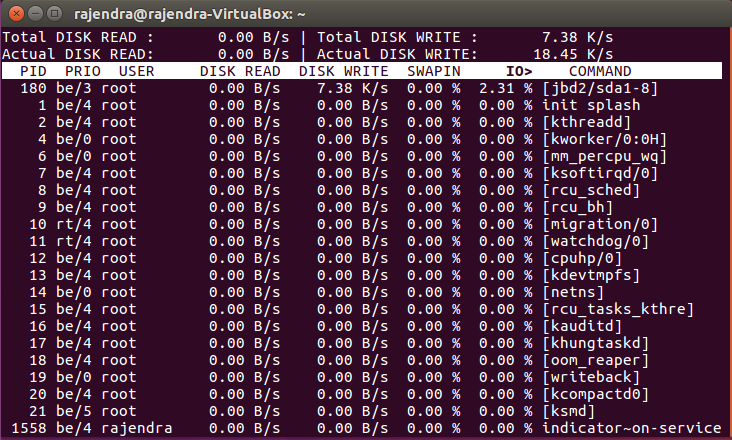 If we want to change the sort order, we can do it using the ‘r’ key. By default, in the sort column, you can see symbol ‘>’. Press ‘r and sort order changes and symbol changes to ‘<‘. 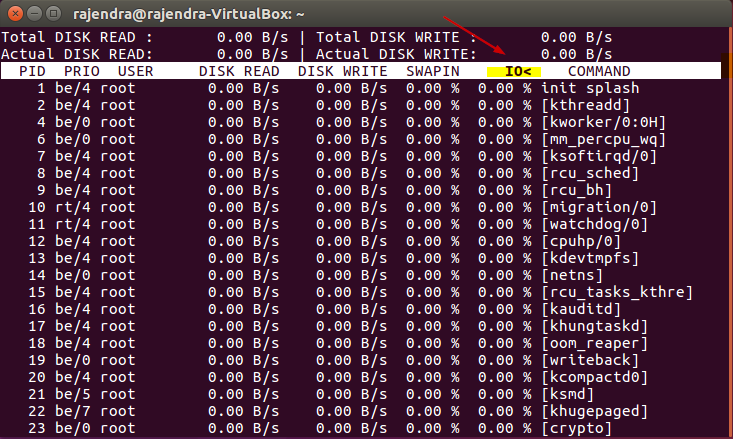 Run the below command to show only particular user processes. For example, we want to view only the user ‘rajendra’ processes.

To monitor the system processes, run the command: 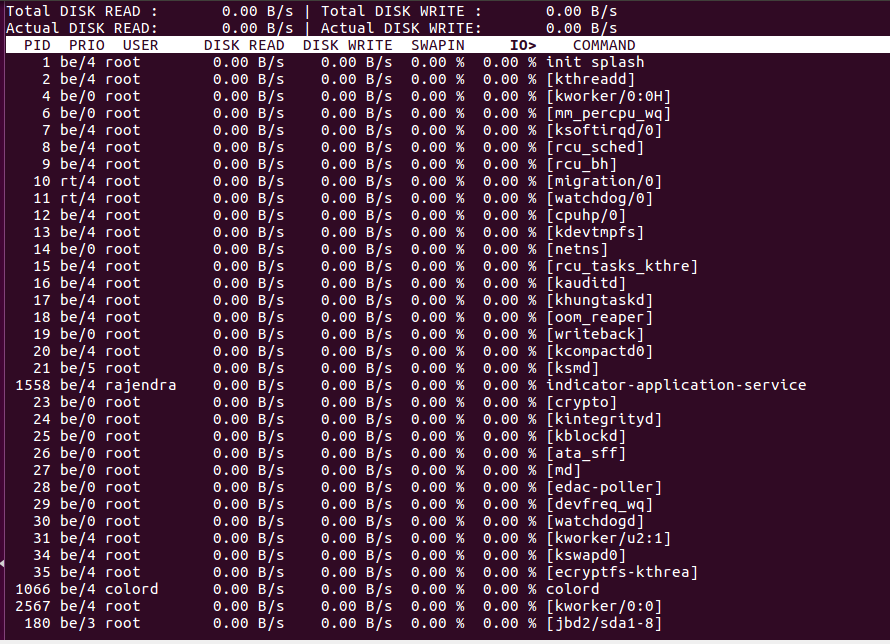 Change unit to KB/s instead of B/s:

Run the command with -k parameter: 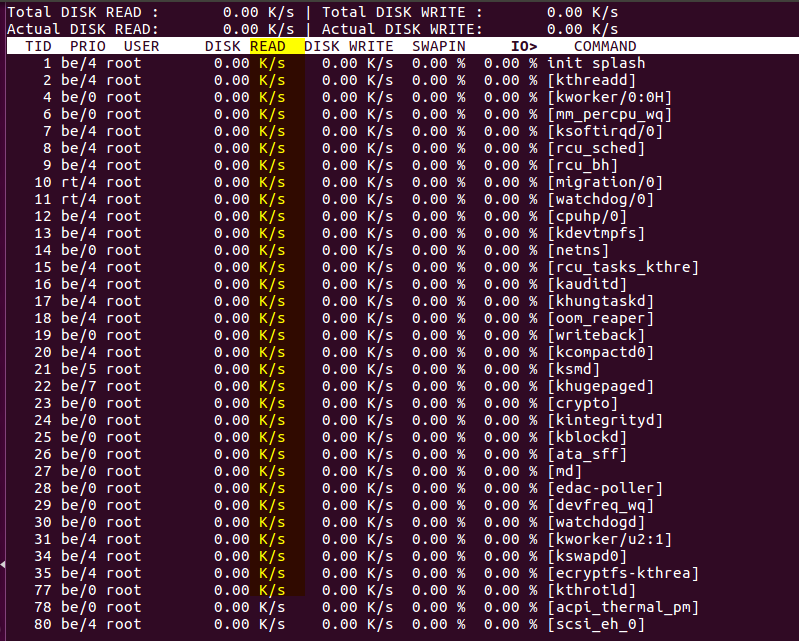 In the article, we have learned to use the ‘iotop’ and ‘iostat’ commands with various configuration options. We can get the details about the individual processes; disks IO related information using these commands.