In this article, we will explore JSON_VALUE() function in SQL Server to extract scalar values from JSON data.

JSON is an acronym for “JavaScript Object Notation”. It is a lightweight data exchange language. If you are familiar with XML, it is a bit hard to understand. You can easily interpret JSON formatted data using its key-value pair.

JSON is a popular language and many NoSQL databases such a Couchbase, AWS DynamoDB. It is popular in modern web and mobile applications.

SQL Server 2016 and later supports JSON format data. You should know JSON format and work with JSON data in SQL Server. It also creates a bridge between a relational database and NoSQL systems.

SQL Server provides various built-in-functions to parse, read, transform, and convert JSON objects. You can also format the T-SQL results in the JSON format. You can go through article category k in SQLShack to understand more details about it.

You can refer to the following image from Microsoft docs to understand the interoperability between SQL table and JSON.

We have the following JSON functions in SQL Server: 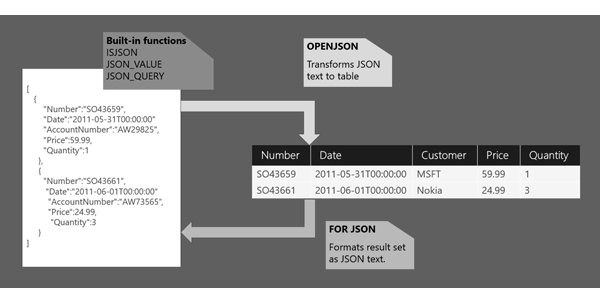 In the query below, we defined a JSON expression and path.

We cannot use a space character in the JSON key. For example, if we run the following code for a key (First Name) and want to retrieve a value for it, it gives us inappropriate format error.

In the below query, the JSON path does not contain an argument value that does not refer to the JSON string. Here, the JSON string does not have the first name key, therefore so we get NULL value in the output using default path mode.

As we specified earlier, JSON_VALUE() function uses LAX as the default mode. We can specify it explicitly as well, and it returns a similar output as shown below.

Let’s change the mode to Strict, and it gives you an error message in case the key does not exist.

Now, let’s change the correct key from the JSON string, and we get output in the Strict path.

You should take a note that it is a case sensitive operation; if we specify the path mode to Strict, it gives the following error.

Similarly, you get an error if you use a capital letter in LAX mode, it also gives the error message.

Example 4: Use an Array in JSON data with JSON_VALUE() function

We can use an array to store multiple values. It uses square brackets ([]) to define the array. In the below code, we have an array for Employees records and puts JSON into a variable called @data.

It returns the output of the first employee data.

We can use SQL UNION ALL operator to retrieve both records and display them in a tabular format.

We get the following output from the JSON_VALUE() function in an array.

Similarly, look at the following example. It holds an array for favorite subjects of a student in the info JSON key. We require to retrieve student name and his second favorite subject listed in an array.

We can use the following code with the JSON_Value function.

It gives you the desired output, as shown below.

As specified earlier, we can get a scalar value from JSON data using the JSON_VALUE() function. In the above example, if we try to retrieve a complete array, it returns a NULL value in the output using the default lax path mode.

We do not want NULL value in the output. It gives an assumption that the specified key does not exist in JSON expression. We should use a strict path mode to get the exact error message.

You get an error in the strict mode because it could not retrieve the array from the JSON data.

In the below code, we have an address key that contains further nested elements. For example, address contains values for different keys FlatNo, Locality, and City.

It fetches the information from the JSON data and gives you an appropriate output.

In this article, we explored the useful JSON_VALUE() function to retrieve a scalar value from the JSON data using various examples. It also demonstrated the difference in lax and strict path modes available with this function. You should explore JSON and process it to handle it with SQL Server.