Before we delve into these SQL concepts, note that I like to do all my development in SQL Management Studio. So if you want to follow along go ahead and open that up. 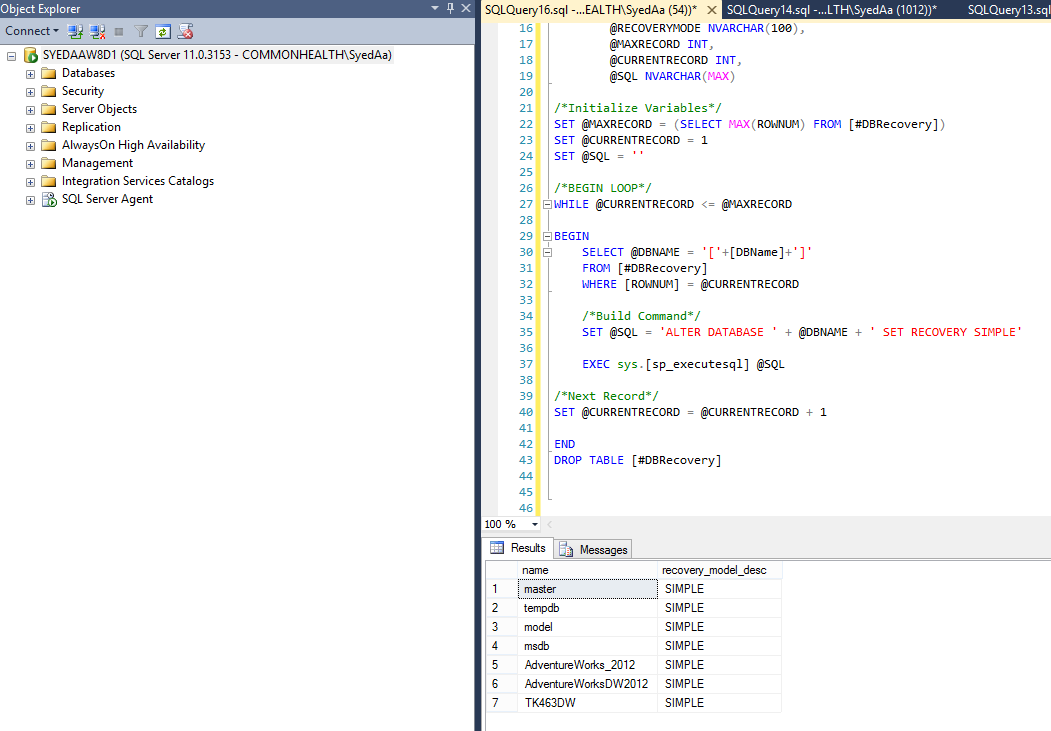 Variables are extremely useful in SQL scripts. They offer the flexibility needed to create powerful tools for yourself. They are especially useful in dynamic SQL environments. They can, and are often used as counters for loops to control how many times you want the code inside the loop to run. A statement can use it to test the value of the data, or a stored procedure can use it to return a value.

We can use the DECLARE statement to declare one or more variables. From there we can utilize the SET command to initialize or assign a value to the variable. Here is a quick example:

You can declare multiple variables in the same DECLARE statement just separate them with a comma. Example would be:

We have declared a variable called @maxrecord as an INT data type. Now we can use the SET operator to assign it a value. Like this:

We just assigned the INT variable @maxrecord with a value of 10. This can change throughout a SQL script, thus providing great flexibility.

Think of a variable as a box that acts as a place holder for whatever value you want to put in it.

The SET statement can only be used on variable at a time. This can become cumbersome if you need to assign values to multiple attributes. But you do need to use multiple set statements.

However you can use a select statement to make this process a little easier. (Largely depending on what you’re trying to accomplish). Here is a quick example of assigning values to variables in a select statement.

I often think of Dynamic SQL as “code that thinks”. Although it’s not quite cognitive, it can be used to handle a lot of tasks that would likely be repetitive or have a high administrative overhead. The concept of Dynamic SQL is one that allows you to build a SQL statement or a full batch of SQL code and present it as a character string. Then you can take this string and execute it. SQL Server gives us a couple of options to execute character strings as T-SQL Code. One is via the simple EXECUTE command (I like to use “EXEC”) or the sp_executesql stored procedure.

So, again why would we ever want to use Dynamic SQL? One reason would be the automation of administrative tasks. Let’s say you have a non-production server with every limited space and you want to make sure that all the databases on your server are in simple recovery mode (to minimize the growth of the transaction logs). Rather than manually query the server to identify the databases that meet this parameter and then manually set them to the proper recovery model you can write a piece of code to execute periodically. This code can identify the databases that aren’t compliant with your set rules and make then make the change for you. Thus reducing your administrative overhead. This will save you time and allow you to focus on meeting real deadlines, projects and such.

The EXEC command was around before the more robust sp_executesql stored procedure. Rather than placing Unicode strings into one of the parameters, you simply place it in parenthesis after exec.

This is a great built-in stored procedure for SQL Server. It allows you to use input and output parameters allowing your dynamic SQL code to be secure and efficient.  The Parameters not only serve a purpose for flexibility, but they also inhibit SQL Injection attacks since they appear as operands and not part of the actual code.

Also note that as long as the SQL statement itself remains the same, yet only the parameters change, the query optimizer will utilize the same cached execution plan.

Let’s use the example above regarding databases and simple recovery model. I’m not going to write out the entire script for you here as it is beyond the scope of the article. But the snippets I provide should provide enough information to show how to use this method.

My goal is to find out if any databases are not in the simple recovery model. If they are, I want them to be put into the compliant mode.

I like to take the criteria and place the databases that need to be altered into a temp table.

As you can see, I am using variables as they play an important role in creating dynamic SQL.

I use the @SQL variable to store the actual code that will execute. In this case, it is a simple command to change the recovery model of the database. Remember we already identified which databases are not in simple mode when we created the temp table.

Then finally, I use the sp_executesql stored procedure to execute the command that is stored in the @SQL variable.

Another way to visualize a loop: 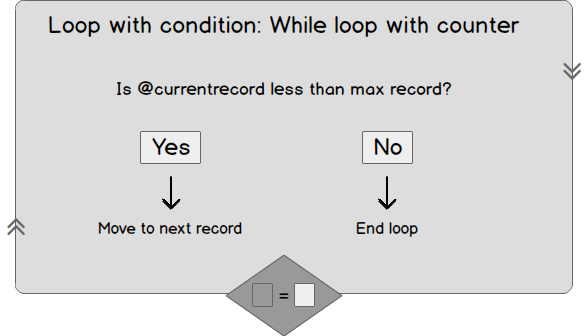