Database administrators or developers require generating scripts for SQL Server objects. We might need scripts to store a copy of object script before object change, create specific objects into other database environments such as development, UAT or non-prod environment. It is an excellent practice to keep a copy of the object before making a change to it. We can easily refer to the old script and roll back if required. Usually, we use SSMS Generate Scripts wizard to get these scripts.

Let’s have a quick review of Generate Scripts Wizard in SSMS.

Right click on a database and go to Tasks and Generate Scripts. 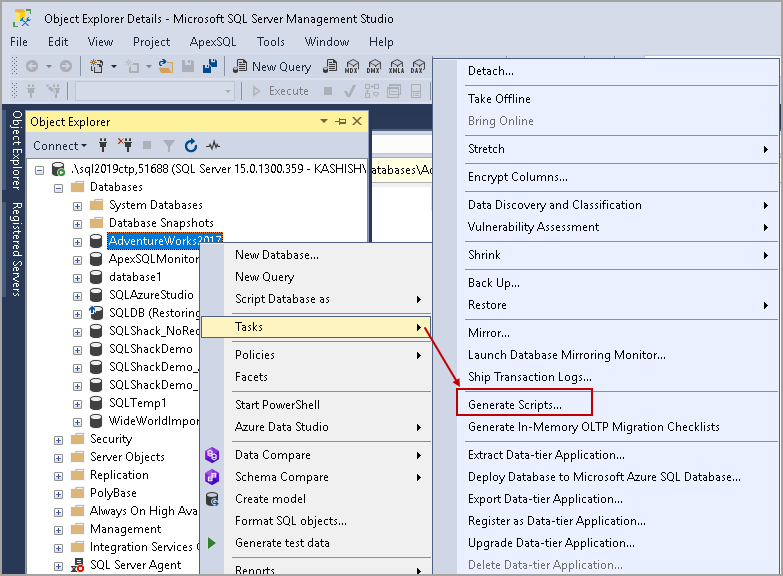 It gives the option to script the entire database or specific database object. 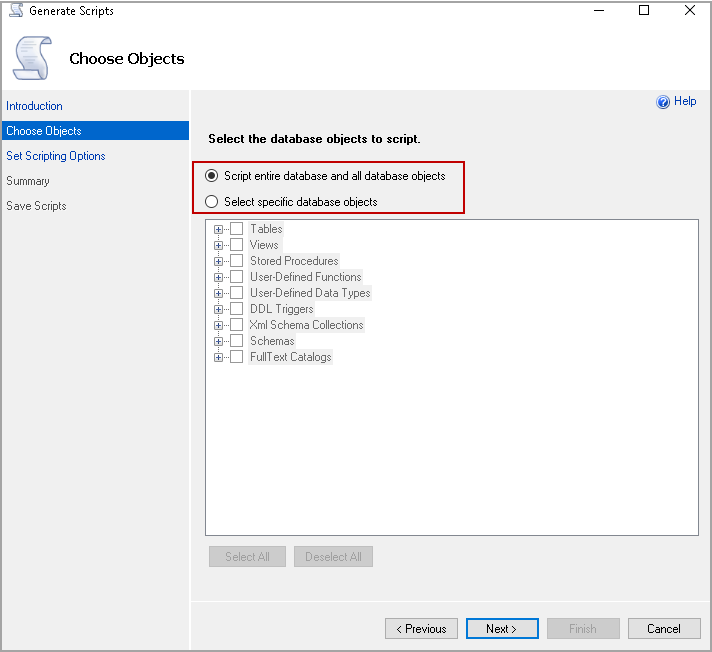 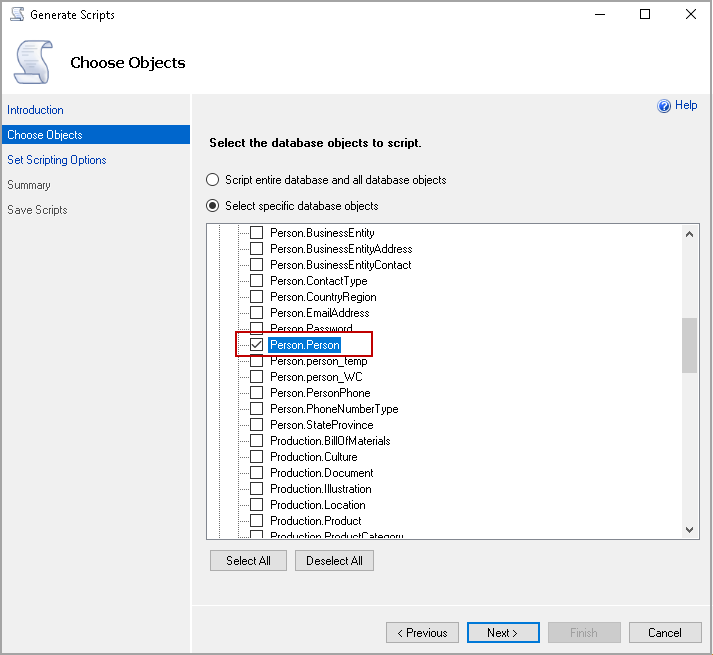 In the next page, it gives us the scripting options. We get the following options. 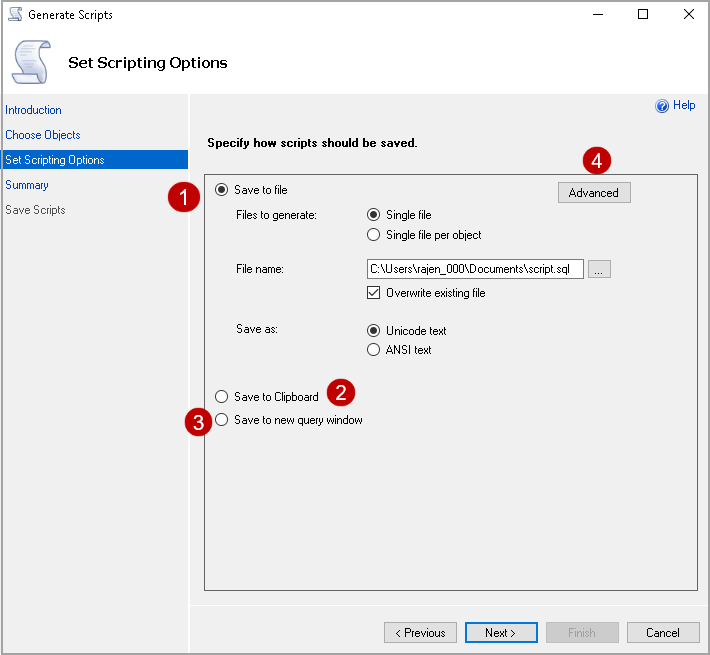 Click on Advanced to set advanced scripting options. On this page, you can set various options to generate scripts. A few relevant options are as follows. 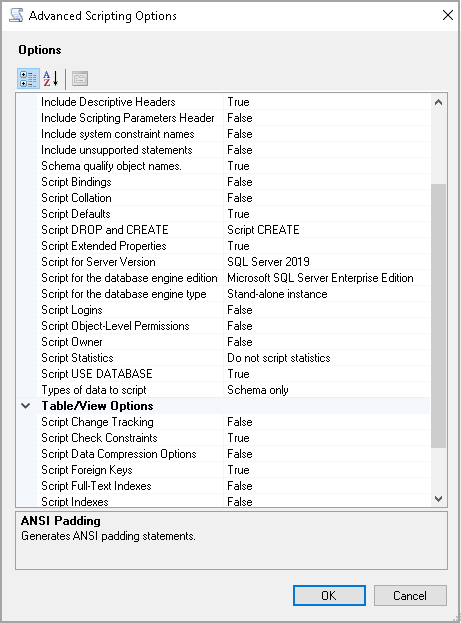 On the next page, we can review the configuration and finish to generate object scripts. 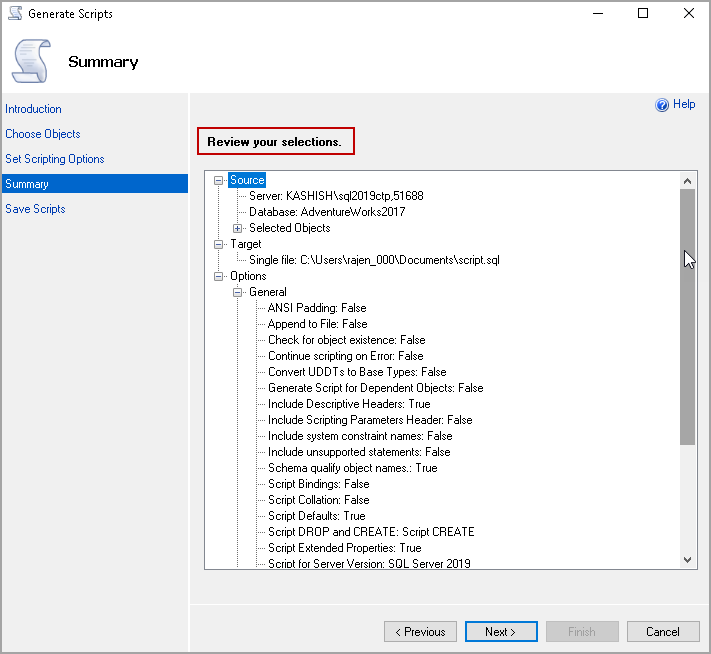 We need to repeat the same process depending upon the requirements of objects script. We might need to set options different for few objects. We need to follow this wizard for a specific object in this case. It might be a time-consuming process to do it.

This approach also works on instance level only. We need to do this task only for each SQL Server instance. We cannot use this task with multiple instances altogether.

In this article, I will use the AdventureWorks2017 database and HumanResources.Employee table. We can see that this table contains Primary, foreign keys, clustered, non-clustered index and triggers. 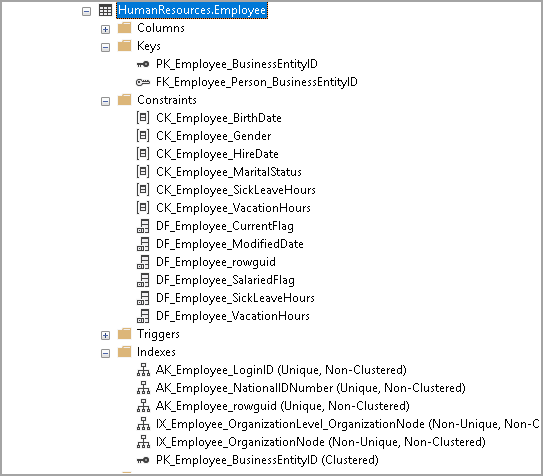 In this case, we can use PowerShell open-source module DBATools to do this task for us.

In my previous articles on DBAtools, we explored a few essential commands to do tasks in SQL Server. We need to use a combination of commands to generate object scripts using DBATools.

We use Get-Help command in DBATools to get search commands containing the keyword.

You can find the synopsis and syntax of the Get-DbaTable command in DBATools.

Let’s run this command to get information about the HumanResources.Employee table.

In the output, we can see that we get a piece of information about the index and data space, row count along with the table properties information such as FILETABLE, memory optimized, partition table, change tracking.

Let’s check the synopsis and syntax of Export-DbaScript with the following command.

Let’s execute DBATools commands Get-DbaDbTable and Export-DbaScript to generate a script for the object.

In this script, we use -Passthru parameter to display script in the window itself.

It generates the object script; however, we did not get scripts for keys, constraints, indexes. This script might not be useful for us because it does not replicate the source objects and gives only basis object creation script.

If we execute the above command without -Passthru parameter, it saves the script in the current user context. You can go to the directory and open the script in SSMS to go through it.

Let’s explore this command to set scripting options and generate the desired script.

We can check the available scripting options using the Get-Member command. Execute the following command to get a list of available properties along with their definitions. 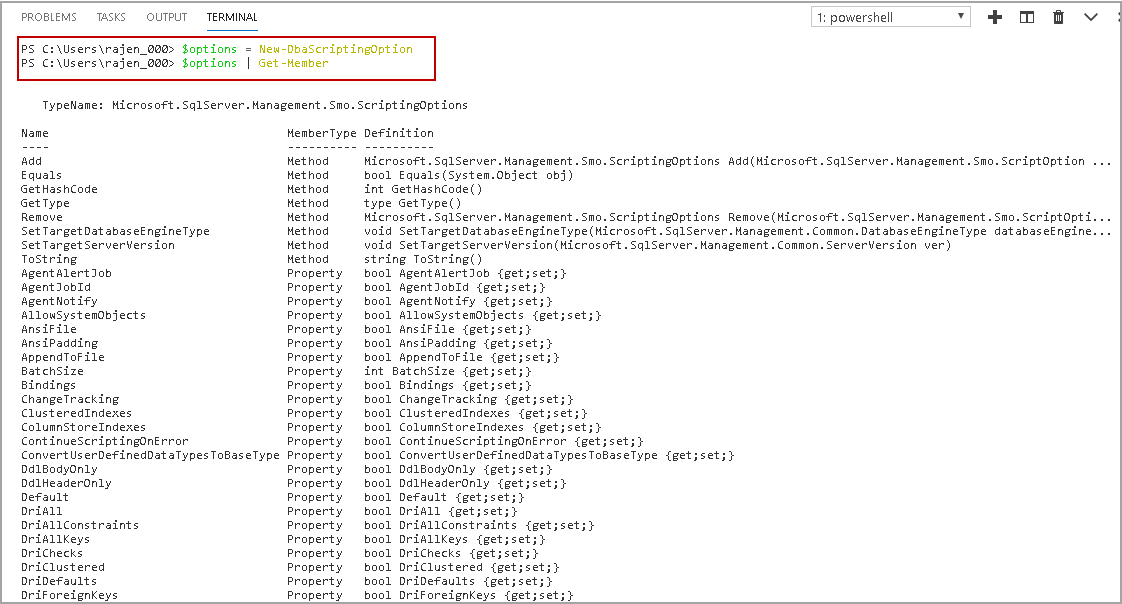 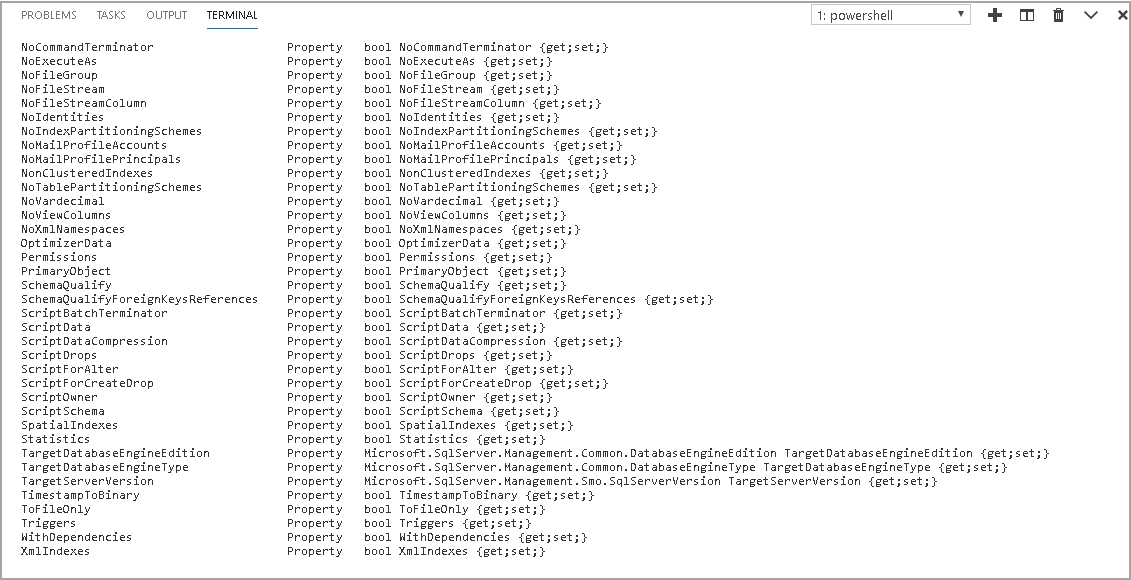 We get the return value False for the DriClustered parameter. It is the reason that the generated script using DBATools does not contain the clustered index information.

Similarly, we can check value for other properties.

We can change the value of required properties to TRUE and use $options object along with the parameter –ScriptingOptionsObject to generate the script with these objects.

Suppose we want to add all constraints in the object script. Execute the following script to change the value to TRUE for DriAllConstraints and generate the script.

We can see constraints as well in the script for the specified object. 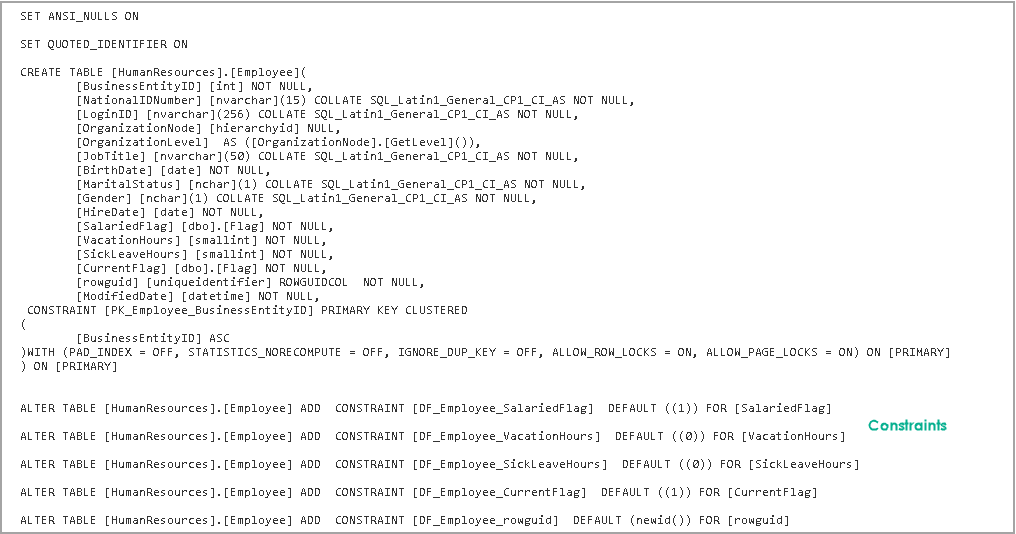 Let’s do the following things for this example.

Let’s try with a few other interesting options. Suppose we want foreign keys in the object scripts. We need to enable DriForeignKeys parameter and execute the script as follows

In the output, we can see foreign key constraints along with the object creating script.

Add If Not Exists in object creation script using DBATools

It is a good practice to check whether the object exists or not before we create an object. We might have another object with a similar name. We use SQL Exists operator to test the existence of an object in the SQL Server database.

Our script should include Not Exists operator, and we should create an object if it does not exists. We need to enable parameter IncludeIfNotExists to the true and generated script will contain the IF EXISTS clause.

Specify a target version to generate a script using DBATools

We want to set the TargetServerVersion parameter for the SQL Server compatibility level we want to generate the script. 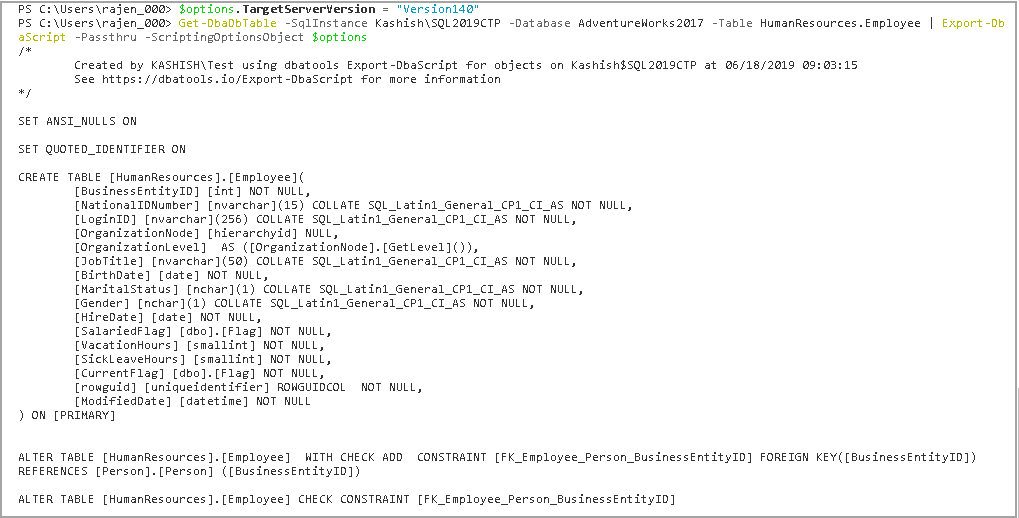 In previous examples, we generated a script for an object using DBATools. We might want to generate scripts for multiple objects. We can select multiple objects in the Generate Scripts wizard of SSMS. In the DBATools also we can do it using variables.

In the following screenshot, we can see it generated scripts for both the objects. 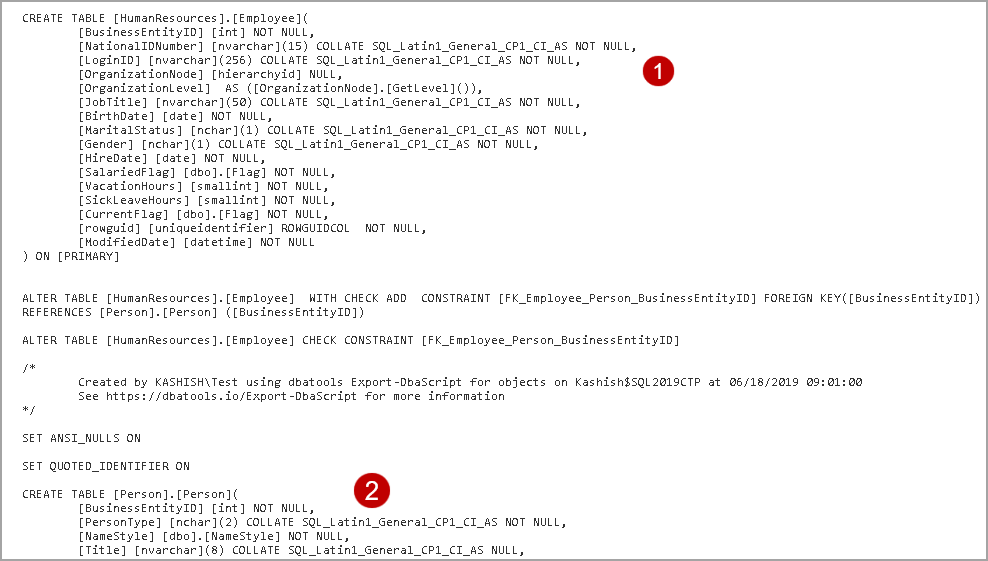 In this article, we explored to generate a script using DBATools Windows PowerShell commands. We can use DBATools to automate these scripts and run as per our requirements. I would suggest reviewing them as per your environment. If you have any comments or questions, feel free to leave them in the comments below.