In this article, we will learn the notions and usage details of the SQL variable. In SQL Server, local variables are used to store data during the batch execution period. The local variables can be created for different data types and can also be assigned values. Additionally, variable assigned values can be changed during the execution period. The life cycle of the variable starts from the point where it is declared and has to end at the end of the batch. On the other hand, If a variable is being used in a stored procedure, the scope of the variable is limited to the current stored procedure. In the next sections, we will reinforce this theoretical information with various examples

Note: In this article examples, the sample AdventureWorks database is used.

The following syntax defines how to declare a variable:

Now, let’s interpret the above syntax.

Firstly, if we want to use a variable in SQL Server, we have to declare it. The DECLARE statement is used to declare a variable in SQL Server. In the second step, we have to specify the name of the variable. Local variable names have to start with an at (@) sign because this rule is a syntax necessity. Finally, we defined the data type of the variable. The value argument which is indicated in the syntax is an optional parameter that helps to assign an initial value to a variable during the declaration. On the other hand, we can assign or replace the value of the variable on the next steps of the batch. If we don’t make any initial value assigned to a variable, it is initialized as NULL.

The following example will declare a variable whose name will be @VarValue and the data type will be varchar. At the same time, we will assign an initial value which is ‘Save Our Planet’:

Assigning a value to SQL Variable

In the following example, we will use the SELECT statement in order to assign a value to a variable:

Additionally, the SELECT statement can be used to assign a value to a variable from table, view or scalar-valued functions. Now, we will take a glance at this usage concept through the following example:

As can be seen, the @PurchaseName value has been assigned from the Vendor table.

Now, we will assign a value to variable from a scalar-valued function:

For different cases, we may need to declare more than one variable. In fact, we can do this by declaring each variable individually and assigned a value for every parameter:

This way is tedious and inconvenient. However, we have a more efficient way to declare multiple variables in one statement. We can use the DECLARE statement in the following form so that we can assign values to these variables in one SELECT statement:

Also, we can use a SELECT statement in order to assign values from tables to multiple variables:

Useful tips about the SQL Variables

Tip 1: As we mentioned before, the local variable scope expires at the end of the batch. Now, we will analyze the following example of this issue: 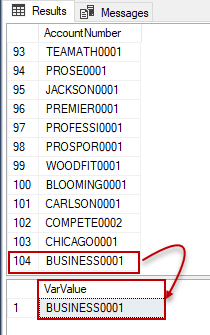 In this article, we have explored the concept of SQL variables from different perspectives, and we also learned how to define a variable and how to assign a value(s) to it.