In this article, we will talk about generating random values for testing purposes.

That is why, it is very important to generate data and test the software with millions of rows. This is not always an easy task. In this article, we will give you some useful T-SQL tips that may help or at least inspire you on this. In general, random data is very useful for testing purposes, to learn about query efficiency, demos and more.

In this article, we will teach how to generate up to a million rows of random data in SQL Server including:

In the first example, we will use the DimCustomer table from the AdventureWorksDW database mentioned in the requirements. This table contains 18,000 rows. We will use a cross join to generate all the possible combinations of names and last names. With the cross join you can generate a total combination of 341,658,256 users for your tests. The following example shows how to create a combination of 1 million user names and last names: 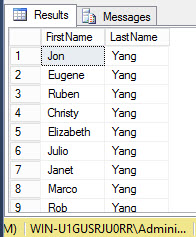 Figure 1. Generating all the possible combinations between the first and last name

If you want to generate 34 million rows, you have to replace this line:

The query generates a Cartesian product with all the combinations and TOP limits the number of rows.

The following example will show how to create a table of 1000 rows with random values from 1 to 100. We will use the RAND function to create random values and CHECKSUM(NEWID()) to generate distinct values. We use the cast to convert the values from real to integer: 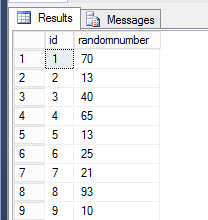 If you want to generate 10000 values, change this line:

If you want to generate values from 1 to 10000 change these lines:

If you want to generate real values instead of integer values use these lines replace these lines of the code displayed before:

And use these ones:

The query will show real numbers from 0 to 100

Another typical request is to provide random values with specific ranges. The following example will show a range of temperatures in °F (I really prefer the metric system, but I will do an exception this time).

The human body has the following fluctuations of temperature: 95 to 105.8 °F (Normal temperature is from 97.7–99.5 °F, higher values means fever, Hyperthermia and lower values Hypothermia). 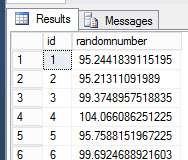 If you want real numbers from 6 to 10, change these lines of code:

Where 6 is the minimum value and 4 is the difference between 10 and 6.

Another common request is to generate passwords. This example is used for initial passwords that will be changed latter by the user or when the user forgets the password.

The following example will generate 100 passwords:

The values displayed by the T-SQL statements are the following: 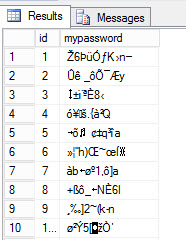 We use the CRYPT_GEN_RANDOM function to generate passwords and we will then convert them to a varchar. The function returns hexadecimal values and we convert it to characters.

The following example, will generate some passwords. We will use the First names and last names of the example 1 of the table DimCustomer to generate random fake emails in SQL Server. If we have for example a Customer named John Smith, we will generate an email that can be jsmith@gmail.com, or use a Hotmail or Yahoo account. Let’s take a look to the code:

This last example will show how to generate random country names. We will use the table Person.CounryRegion from the adventureworks database and we will add an id using the Row_number function: 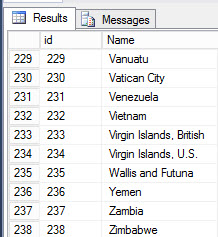 Figure 6. List of countries in the Person.CountryRegion table of the adventureworks

We will use the list of random numbers of the second example to generate values from 1 to 238 (238 is the total number of countries) we will use an inner join to join the random numbers with the countries and generate country names randomly:

The T-SQL statements will generate a list of countries randomly: 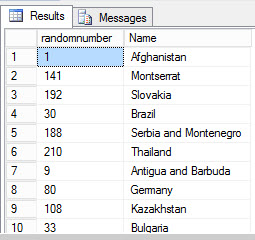 Generate random values for testing can be difficult. However, this article can be useful to inspire you to create your own data. Sometimes we can use existing tables to generate more values. Sometimes we can create the data from zero. In this example, we show how to create data using the Random function.