SQL Server Data Tools – a free standalone download or and add-in to visual studio comes in different flavors and versions. Although this blog post uses Visual Studio 2012 and SSDT stand-alone the principles are example are also valid on Visual Studio 2013.

When SQL Server 2012 was released, SSDT was also released and since then many versions have been released, not necessary following the release pattern of SQL Server. 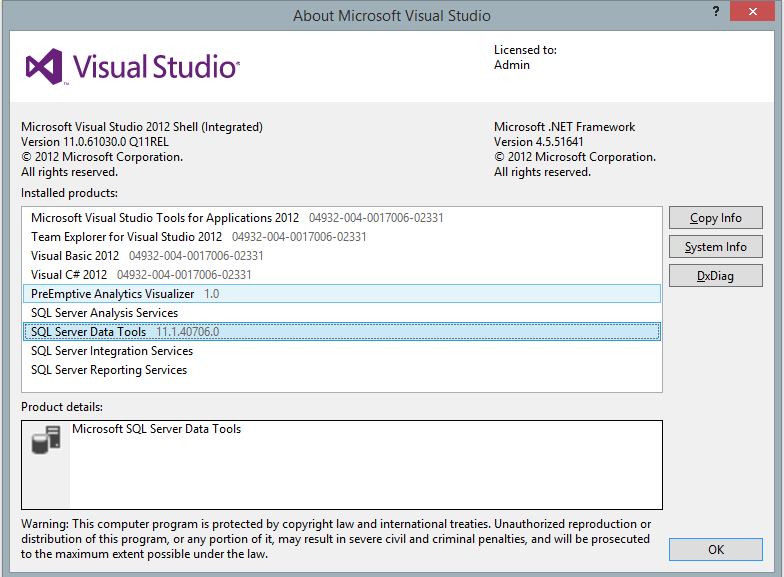 For each release, some new features are added. Some are still missing but they are probably coming in an upcoming release.

Team Foundation Server on the other hand has been around for quite a while. Team Foundation Server is the collaboration platform at the core of Microsoft’s application lifecycle management (ALM) solution. TFS supports agile development practices, multiple IDEs and platforms locally or in the cloud and gives you the tools you need to effectively manage software development projects throughout the IT lifecycle.

In this post, we are going to focus on the interaction between SSDT and TFS. Developing locally and publishing the changes to an on-premises instance of SQL Server. We will look at how we can do continuous integration between development and other environments pushing the schema changes and upgrading the version numbers in a seamless manner upon successful build of the solution.

I am using the free version of TFS called TFS Express that can be installed locally. It is suitable for small projects only and is limited to five concurrent users. Download it here.

At the time of writing, it is not possible to have Visual Studio Online (VSO) deploying to a local instance of SQL Server as VSO cannot “see” your on-premises SQL Servers. Even with a Hosted Build Controller.

I am a database developer and I am working on an existing Azure SQL database that need some changes. I have some simple tables and I need to add a stored procedure to create customers ranking and a table to get hold of the customer ranking. The ranking should be calculated according to how much the customer has bought.

Creating a project from an existing database in SSDT is straightforward.

The first thing I always do when working on an existing database is taking a baseline for the solution. So I have an initial state of the database I eventually can return to when working on it. This is done by right-clicking on the database and choosing snapshot project. It will generate a dacpac file holding the database schema of the newly imported database. I usually name the file “baseline” and leave the timestamp so I now when it was created.

Now I need to add the database to the Source Control provider, in this case Visual Studio Online.

Now that I am done I can implement the changes necessary to database, adding the ranking table, the stored procedure and making changes to the customer table so it references the ranking table.

There is also another table that I think it is important to add: Deployment. The idea behind this table is to keep track of all the deployments I’ve made, using a post deployment script that is always executed each I perform my continuous integration

Now that I’ve done my changes I can build my project (necessary before taking a snapshot), take a snapshot project of my database, call it “change_complete”, and leave the timestamp as is.

The idea is to have the database deployed each time I check the source code in. At the same time I want the deployment table to keep track of the deployments.

To achieve that I start by creating a post-deployment script:

For modifying the deployment options go to the Source Control explorer tab and add a new build definition. 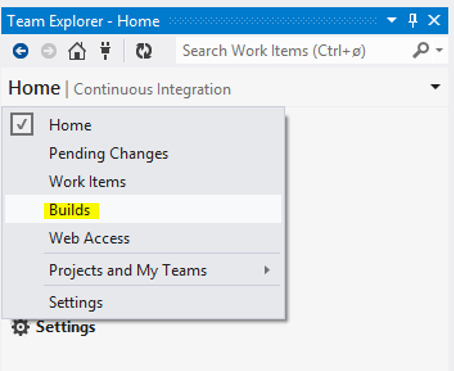 This is the page where you can control what happens during a build.

What we want here is to tell Visual Studio to use msbuild to deploy the database on any successful builds. This is done by:

The arguments necessary for the example are:

So in my case the arguments (separated by space) would be:

Save the New build configuration. Every future check in should trigger a build and a publish to the database specified in the publish file.

Next time you check in it, your build definition should kick in and build the project:

The Build menu of the Team Explorer should show the current build:

And finally the Build log should show the progress and status:

In the next post I will show you how to do unit testing of your SSDT database project. In the meantime: Happy deploying!