In this article, we will learn various methods of how to get an SQL execution plan of a query.

A SQL Execution plan is a very helpful query analysis tool that helps to diagnose the query performance issues and to understand the backside of the complex operation details. A query plan can be likened to an X-ray of a query because;

How to display an SQL execution plan in Azure Data Studio

In order to display the estimated execution plan of a query in Azure Data Studio, we click the Explain button at the top of the query window.

At the same time, we can find out the missing index suggestions under the query text. In the Top Operations tab, we can see a table report that contains various statistics about the estimated query plan operators.

The Results tab shows the XML format of the estimated SQL execution plan.

We need to enable the Command Pallete to display the actual query plan in Azure Data Studio. At first, we will expand the View menu and then select Command Pallete. 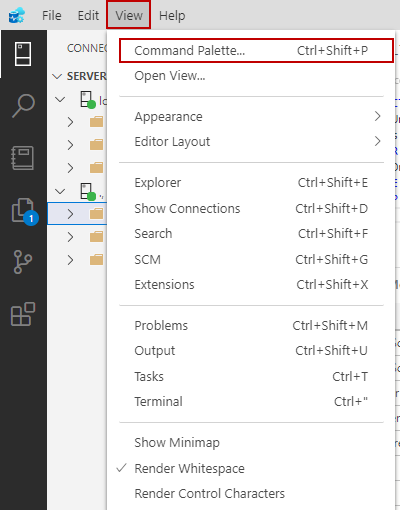 The Command Palette is a searchable command prompt that can be used to practically run commands or change settings. We type the “actual” keyword in the box and click the Run Current Query with Actual Plan.

In this way, we will both execute the query and also we will obtain the actual query plan.

Tip: With the help of the extensions we can gain new functionalities to Azure Data Studio. For example Queryplan.show extension visualizes the query plan in a different style. 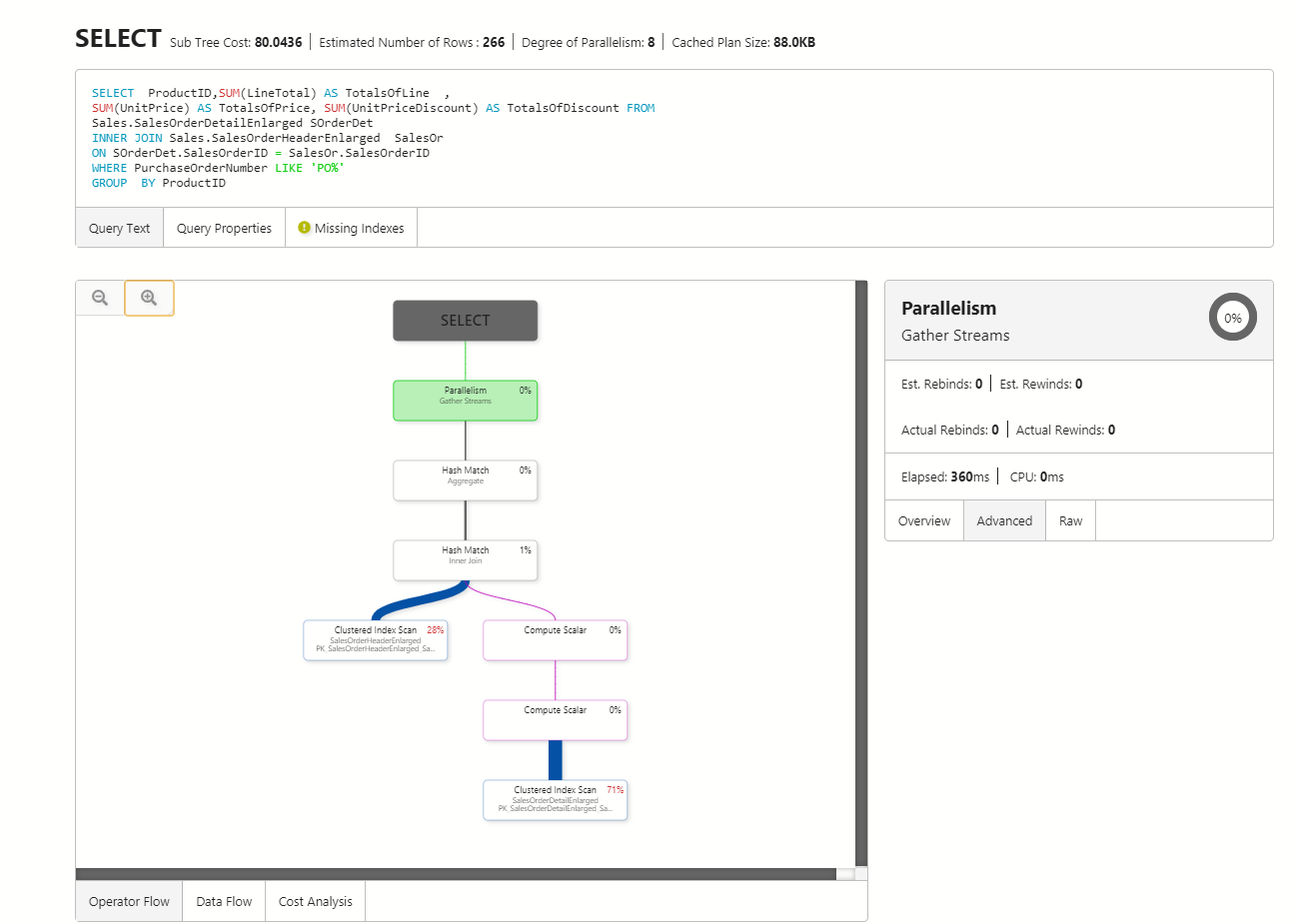 SQL Server Management Studio (SSMS) is an advanced development environment that enables us to configure, manage and administrate SQL Server databases. At the same time, SSMS allows us to develop SQL queries. SSMS includes two simplistic features that help to obtain estimated and actual query plans. Under the Query menu of the SSMS, we can find out the following options: 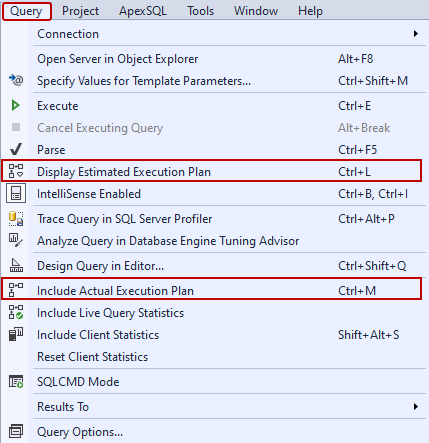 As an alternative method, we can use two small buttons where are located on the SQL editor toolbar.

After clicking any of these buttons the graphical execution plan will appear on the Execution Plan tab. When we hover the mouse icon over the query plan operators, a detailed pop-up will be shown that includes detailed info about the operator.

The plan arrows point out the data directions between the operators and how many rows are pumped into the next operator.

After clicking this menu item, the plan will be displayed in XML format in a new window.

Besides the graphical query plans, we can obtain the execution plans in text or XML format with help of the SET SHOWPLAN command. The first command that we will learn is SHOWPLAN_TEXT. When we enable the SHOWPLAN_TEXT option before a query, a hierarchical tree result set will return that includes which operators will be performed in order. In fact, this result set contains very limited information, so it would not be very realistic to consider it as a complete query plan.

The SHOWPLAN_ALL is another option that we can use to get an estimated execution plan in a text format. The returned result set includes the estimated row numbers and other resource cost estimations.

With help of the SHOWPLAN_XML command, we can display the estimated execution plan in an XML format. This command can be considered the same as XML formatted of the estimated query plan.

As a last, we will take a glance at the STATISTICS PROFILE. After enabling this command, we can obtain the actual execution plan in text format with the query result set.

SQL Server stores the compiled plans in the query plan cache so they can be reused by the query optimizer for the next execution of the queries. To view these cached plans we can use the dm_exec_cached_plans dynamic management view. Through the following query, we can return cached query plans.

UseCounts: How many times the cached query plan is referenced.

Cacheobjtype: Type of object in the cache.

An Extended Event is a monitoring tool that captures the various activities that are performed in the database engine. The events can capture estimated or actual query plans of the executed queries:

query_post_compilation_showplans: This event captures the estimated query plan of a query when it is initially compiled.

query_post_execution_showplan: This event captures the actual SQL execution plan of a query when it is initially compiled.

The following query will create an extended event that includes the above-mentioned events. Additionally, it will filter the captured event only for the particular database.

After creating and enabling the extended event, we will launch the Watch Live Data screen to observe the captured events. Firstly, we will clear the query plan cache for the Adventureworks database.

As a next step, we will execute our sample query two times and interpret the captured data that are 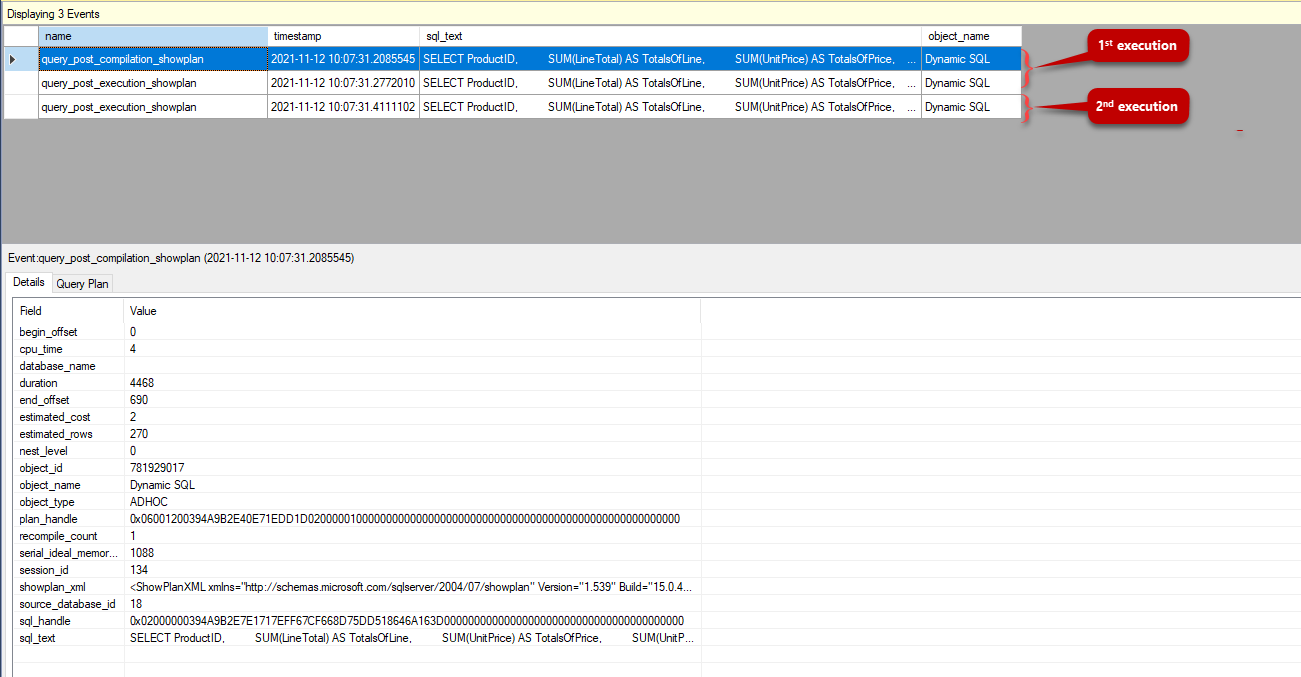 In the first execution of the query, the query plan is not in the plan cache therefore the query is initially compiled, and then it is added into the query plan cache. For this reason, the query_post_compilation_showplan event is captured but in the second execution, we can not see this event because the optimizer finds an appropriate cached plan and use it. We can obtain the graphical execution plan by jumping the Query Plan tab.

SQL execution plans include all details about query execution steps therefore it plays a crucial role to understand the back-stage activities and resolve the performance issues. In this context, we can use different tools or commands to display query plans: